Scott Wierzycki of The Battle Corps crossing the rig like “Spider-man”.

This past weekend BattleFrog Series (BF) made their journey to the outskirts of Chicago for another one of their events. Their race was held at the site of Dirt Runner a permanent obstacle course facility which puts on some awesome events.  Seriously, check out their site, Dirt Runner, which lists Obstacle Course Races (OCRs), night OCRs, training days and DRX Games (obstacle challenges without the running).   Plus, they offer a yearly pass that includes every event for $169 and it is the site of Day 6 of OCR America on June 24th (sign up here). 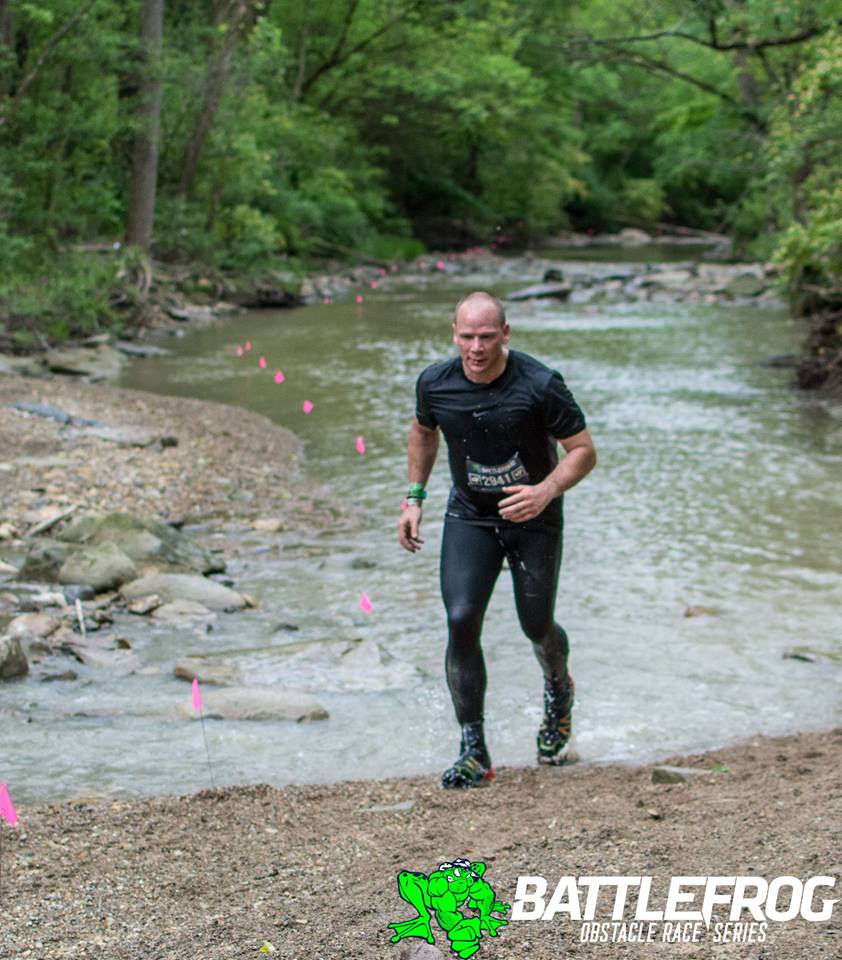 The terrain provided a good mix of trails, uphill climbing and stream movements. Compared to other events it was easier than Cincinnati and Nashville but was much harder than Charlotte. It would have been more challenging than Kansas City (Topeka), if the KC venue had not been flooded with water.

BF has been known for their challenging obstacles, but to be honest, I thought this event was easier than their previous events I have been a part of. Notably missing from the course was the 8 foot wall, the monkey bars, the wedge wall, over/under bars and one of the rigs. (Actually, both rigs were on the course but they were side by side to allow for more participants to flow through preventing bottle necks.) There was plenty of additional pre-fabricated obstacles available, since Dirt Runner holds their events at this location that looked awesome. However, they chose not to use them unlike what they do when BF goes to Cincinnati (home of Mud, Guts and Glory). The Platinum Rig also seemed easier than normal with an Elite lane that seemed more like the Intermediate lanes I had previously seen on other courses. The Elite lane had a lot more rings than normal and no nunchakus, which allowed me to breeze through it on all my BFX laps. 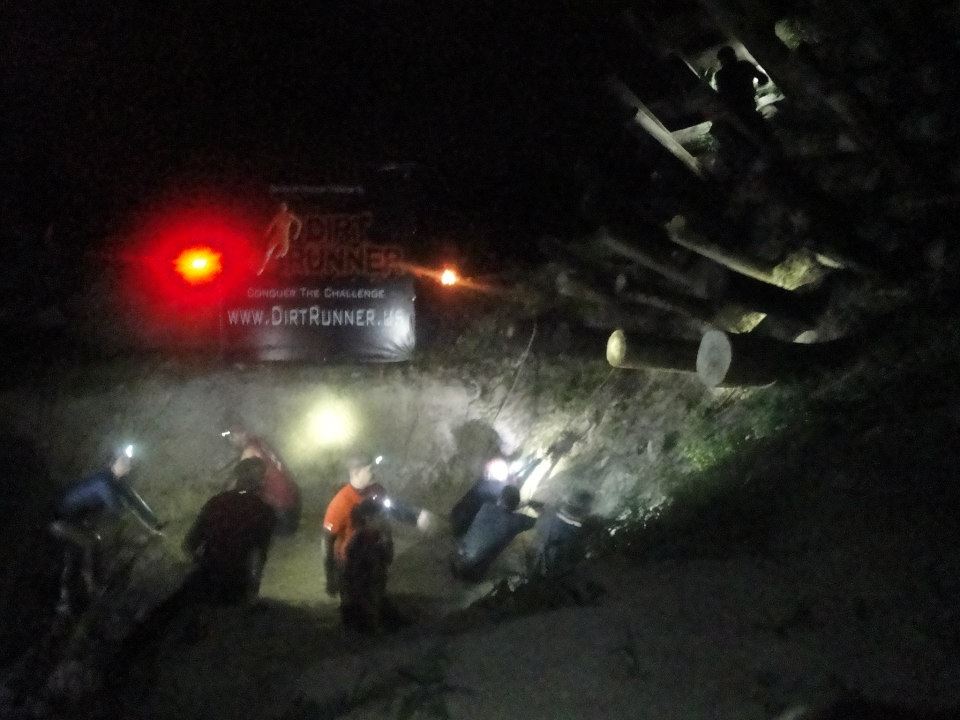 A picture from one of the night OCRs put on by Dirt Runner. Seriously look at that obstacle…I'm not even sure what is going on there.

My fan favorite (heavy sarcasm here), was the Jerry Cans. The volunteer at that station claimed that if you put the Jerry Cans down at any point during the loop to rest, you owed him 50 pushups. I had never heard this rule and was pissed about it since I was doing BFX. I even tried talking to one of the build crew and one of the volunteers with a radio so they could talk to him to stop this ridiculous addition. Although they confirmed it was not a rule, I was told to follow the volunteer’s directions (thanks for the help guys….that’s also sarcasm). 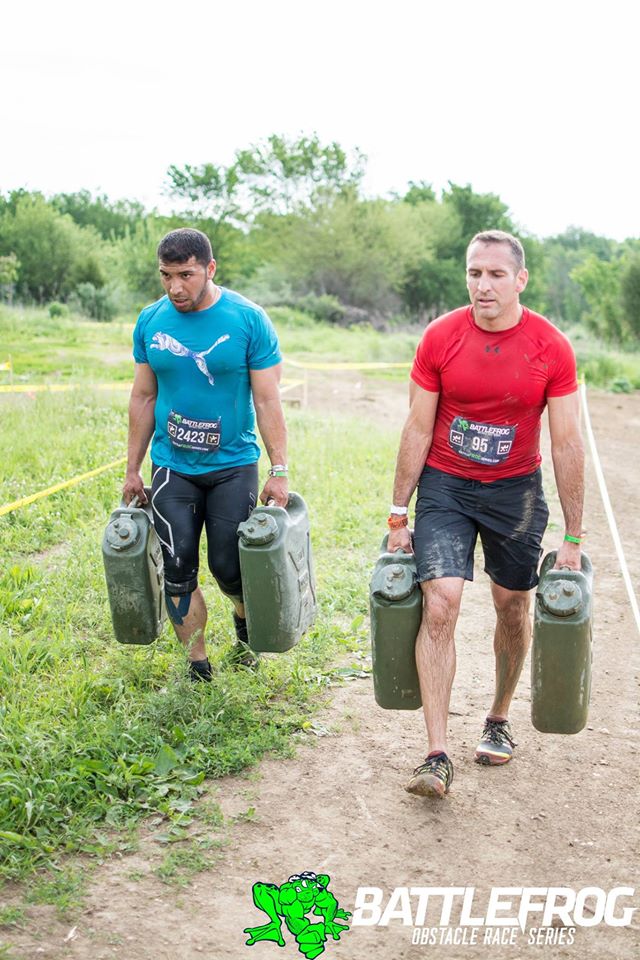 Better not rest those cans otherwise it is 50 push-ups.

I thought it was impossible at first but the carry was one of the shorter and easier ones I have seen. I managed to make it through 5 out of 6 laps running with a Jerry Can in each hand without resting. I finally broke big time on my final lap resting about every 10 feet and begrudgingly did my 50 pushups upon completing the carry. I wanted to tell that dude to go f*&% himself and for him to try the loop without putting them down while he was fresh let alone after 7 hours of racing. I bit my tongue though, because without volunteers these events would not occur so instead I said nothing but made sure I thanked the volunteer at the over/under/through walls for spending his Saturday helping out.

As usual I missed the festival (due to BFX) but it sounded good and I believe they even did a little more than normal to honor our veterans since it was Memorial Day Weekend.

Parking was great with a huge field located feet from the entrance to the venue. It was $10 to park and there was no VIP parking, because it was not needed.

Honestly, I did not even notice the new rules, but I did not hear of any complaints from the other participants I talked to (minus Mr. Jerry Can). My family did say they saw some BFXers taking the penalty loop on their final lap after failing the rig, which I think are better options than doing bodybuilders. #obstaclesovercalisthenics (is that still not catching on?)

Besides the Jerry Can carry volunteer making up his own rules and what I perceived was BF putting on one of their easier events, there was not much else to complain about. I still think that BF needs to at least recognize the 2nd and 3rd place finishers for BFX. These guys and girls spend around seven hours on the course and get nothing. I am not talking about prize money but I think something simple but nice like a BFX coin would suffice, along with a picture on the podium. Luckily I won BFX this time and the guys who said they finished 2nd/3rd were still around, so we made sure we got a male BFX podium picture.

Other than that as a general rule for all course designers not just BF, I would prefer if rope obstacles like rope climb, the rig, the 14 foot wall with rope and Tip of the Spear were placed in direct sunlight. While typically this does not affect the elite wave, by the time BFX and Open wave athletes get to those obstacles they are sometimes drenched in slippery mud. Since the open wavers are the reason OCR exists, they should get a fair shot at completing the obstacles instead of trying to climb the equivalent of a rope covered in Vaseline. 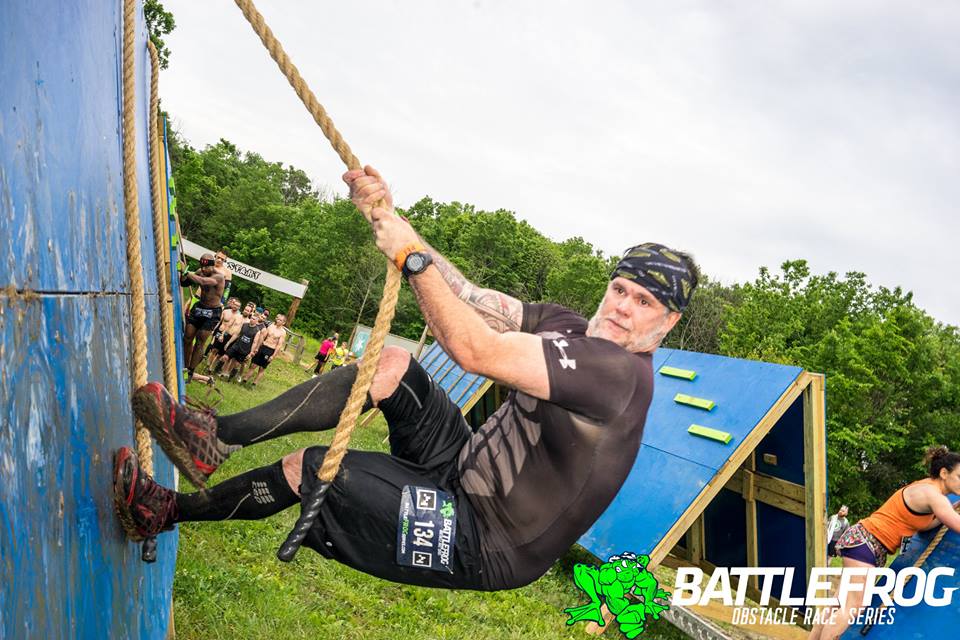 Tip of the Spear early in the day prior to it being drenched in mud.

The rope climb was in the woods and by lap 2 for BFX it was covered in mud making it almost impossible. All of the others including Tip of the Spear was in the sun but it was cloudy (nothing you can do about that) most of the day. Anyway, it meant I had to bump down to an easier lane for laps 2-4 on Tip of the Spear before ramping back up to elite for the final two laps once the sun dried out the ropes, which I bring up to emphasize that it was the condition of the obstacle not my fatigue level which was effecting my ability to successfully complete it. Like I said, I think that is bad for business if the open waver participants do not have a fair shot at completion.

I’m not sure if this is the new direction of BattleFrog or what but it was definitely easier than some of the previous events. Just speculating here but I think BattleFrog initially ramped up the difficulty of their events too fast at the beginning of the year and this is their attempt at setting a new baseline. While not every event needs to be “band taking” impossible, I hope that they do have future events that still provide the same level of difficulty that used to exist.  I gave the event 3.5 out of 5 stars because BattleFrog has set the bar very high in my opinion and this event was not as good as some of their previous ones.

Maybe as an industry, OCR needs to look at some different options such as having the events in early in the year be easier and they gradually ramp up towards the end of the year. Other options might be to have the event start easier and get progressively harder when it returns to the same venue thus giving those that come back an avenue to improve. Maybe it is just calling some of their events BattleFrog Lite if they plan on having fewer less challenging obstacles. Or maybe the solution is for me to be less whiney and just accept that not every event is going to provide the same experience. 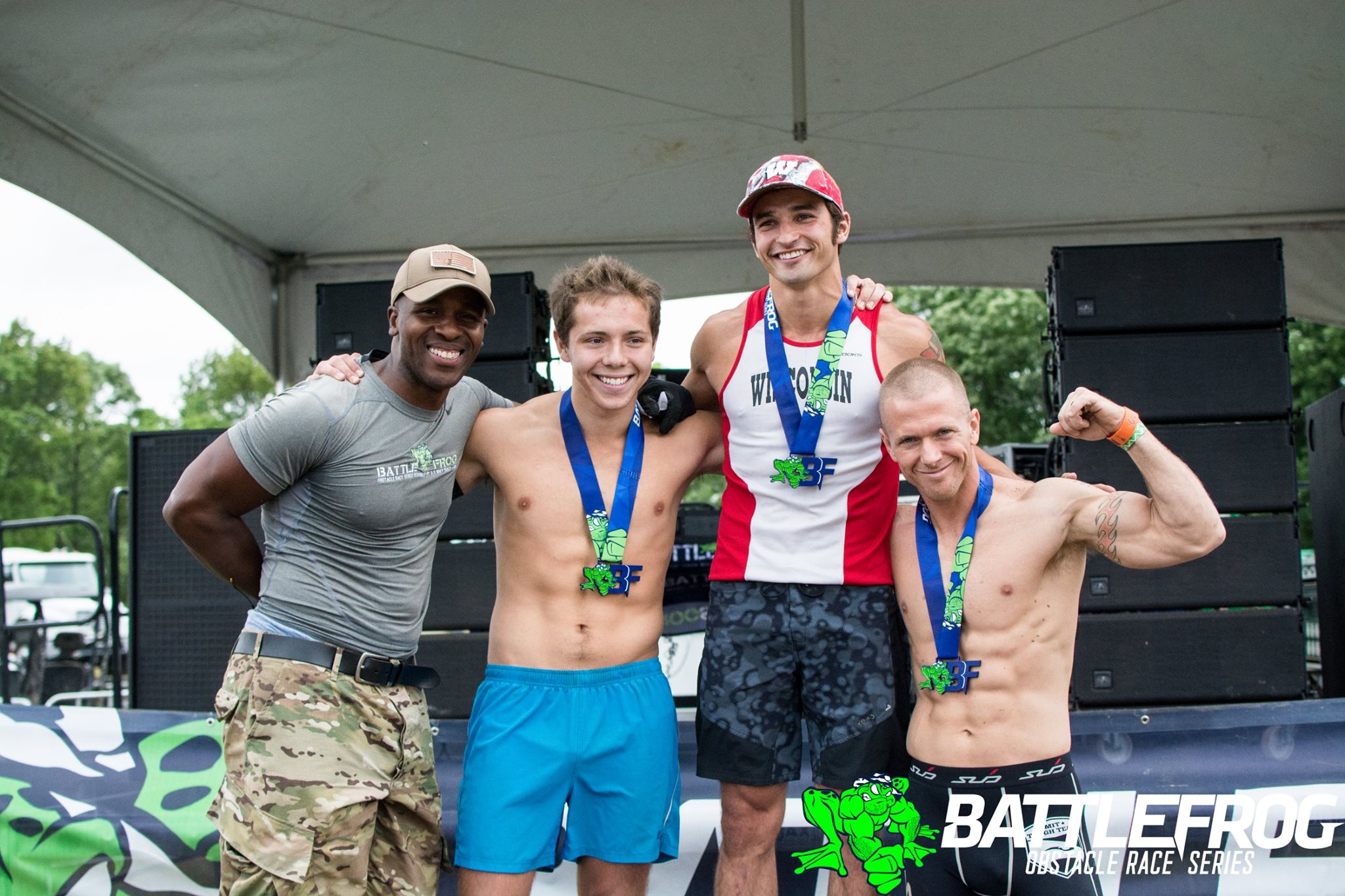 BattleFrog stamped pictures are from www.BattleFrogSeries.com

Amy Perperis of Strength & Speed provided all other pictures