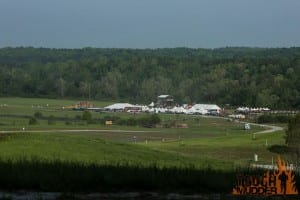 Tough Mudder went with a new venue this year after the last two years being out in Washington, GA. Bouckaert Farm is simple awesome, lots of rolling horse pastures, some steep hills, and as everywhere else in Georgia some nice thick Georgia red clay. The course was listed as 10.6 miles with a total elevation gain/loss of 1155 feet.

The weather was beautiful, rain a couple of days before and clear sunny skies on Saturday. The location was a lot nicer for those of us in and around Atlanta than the 2+ hour drive for the last two years events.

Parking was well marked and the advanced sale of preferred and regular parking seems to have eased the process a bit. The directions or GPS took you right to the location, so there was no guesswork as to being in the area. 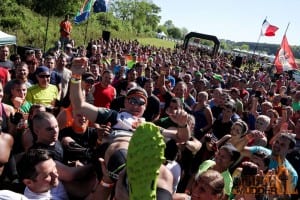 The Festival area was nicely setup with check-in right near the front, with some room to allow teams to meet up without crowding the check-in. The new method of not having bib numbers pre-assigned was a little confusing and not very clear at first, but I will say once it announced that anyone could go to any of the participant check-in lines things started moving quickly. I had my ticket printed out walked up, showed my ID, the volunteer scanned the bar-code on the printout, picked up a packet, scanned that one and I was done. This method is a big improvement over the stand in the line with your name, blah blah blah.

I then went over to the Legionnaires’ check-in so that I could get my headband. There was a little confusion there since the tables were splint into the different headbands, but nothing beforehand indicated that. I was pointed over to the table were the volunteers were just standing there with no one approaching them. Thinking about it now, it makes sense since there are not that many 7-9 or 10+ at each event.

After getting all ready and paying $10 so I could go put my bag on a table that no one was watching or checking people as they left the area. I was ready to hit the course. We were lucky again to have the legion himself Sean Covelle to do our start. Sean did a great job as always motivating the crowd. The start speak is a little heavy on the Mudder Legion stuff, but still great. I was standing at the back of the starting area when Sean asked for the 10+ Legionnaires to stand, all 3 of us stood up, me at the back and the other 2 right up front. Sean asked me to crowd surf to the front and do the countdown. Which of course I did with a huge smile on my face, a quick countdown from 10 and we were off. 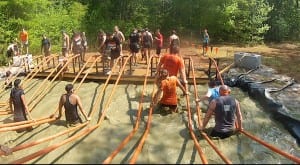 The first mile was a long trail run along the “road” used to get vehicles around the back trails. I wish there had been a obstacle or two, something to jump over, crawl under, but with needing the trail for access that was just not in the works.  Quagmire was the first obstacle and it was okay, I would have liked to see it a little longer and the mud a little deeper. Warrior Carry was next and as always there are people who don’t know how to do it well, but once again it was on and starting to feel like Tough Mudder. The first of Tough Mudder’s “new” obstacles Pole Dancer was next in line. The dip in the middle is what gets most people. I will say whoever designed it, thank you for the paint with the grit in it so participants are not just sliding and crashing down. 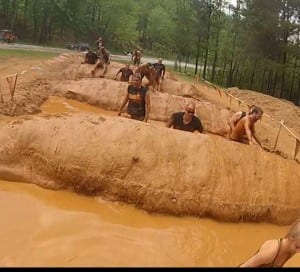 The water was also nice to wash the mud off shoes. Glory Blades were next followed by Cliffhanger. The course designer really picked a good one here; at around the 3 mile mark was the steepest longest climb of the course. Right when you could see what looked like the end, you realized you still had a turn and more hill to climb. Next was the new and improved TM staple of Funky Monkey. The new metal FM is a beast, with small fixed bars it looks like it might be easier, but the paint is slick and there is also a pump spray bottle with some oil just in case a little lube is needed. The placement of FM was great, right back by the festival area so lots of spectators. Then another short run until K2. To put it simply, TM finds the steeped biggest dirt cliff they can find and attach a net at the top.

A quick run and climb and it is done. Trench Warfare was next on the list, the only thing I think needs to be done here is make one of the trenches a little wider. There were several big guys who wanted to do it but just occupied more space than the trench was wide. As a side not, be sure to take off sunglasses before you enter Trench Warfare, it will help. It was getting hot by this point and I was happy to get to the next obstacle for a quick cool down. As always Arctic Enema was perfect for that job. Even with being the longest point on the spectator path, near a mile walk from the festival area, there were still a fair number of spectators here. Berlin Walls were the next obstacle, followed by the one unexpected delay of Spiders Web. The net was not overly high or muddy, but there was a big holdup there. My only guess is it was not very big, so only 2 -3 people at a time could climb it. Georgia red clay is the perfect substance for Mud Mile, when it is a little wet is gets sticky, when it is very wet it will get very messy, and to top it off, it will hold water like a bucket. My only complaint on Mud Mile was it was short, maybe 50 feet. 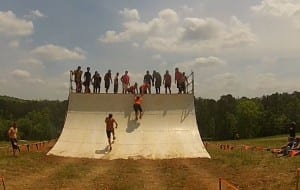 The next TM staple was Walk The Plank. Again TM has safety in mind with the solid structure, deep pool, and lots of water safety personal on location. Almost no spectators because it was so far out to get there few wanted to walk that far. Balls To The Wall was after a nice run around the lakes on site then up a monster approach to Everest.  To me it seems like Everest has gotten a little shorter, I went back and compared pictures and I could not really determine if it has or not. I will say the curve is less which does make it a little easier.

With just the Legionnaire’s Loop and Electroshock  Therapy left, TM decided to some more of the natural obstacles, a massive downed tree, and some of the horse jumps, just to tweak everyone’s calves a little more.

The Legionnaire’s Loop was to say the least disappointing. Seeing the huge waterslide and some of the other obstacles TM has come up to reward the repeat mudders, Georgia’s was a kick in the crotch. Family Feud could be fun, as long as the first ball is not “manned” by a teenage boy who thinks hurling it at peoples head it the right way to do it.

Last was the option to just go get your beer or get shocked then your beer. Electroshock, is now being posted at 7,500 not the 10,000 volts and less wires makes for a lot easier trip. 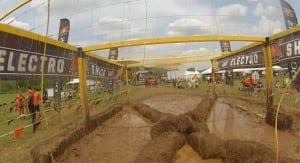 All of the laughs, cheer, and encouragement at EST are still there. It will always be funny to watch some He-man running in it, screaming like a little girl and face planting in the mud when he gets hit.

The festival area was nice, lots of big table to be able to sit down and eat, drink, and talk with friends, both old and new. The showers were as always, changing tents were a nice addition; the food options were all good, a little pricy, but good. I would like to see a few water barrels at the end so people could at least rinse hands and faces without having to hit the showers first.

All in all I would give Tough Mudder Georgia 2014 3.5 mud splats out of 5. I was told Nashville and Charlotte would have some of the bigger obstacles, and I know TM has them in their book, even some that have rarely been seen and some that are still undercover.

Did you do the Tough Mudder Georgia Race? Share your own rating & review about the event today!