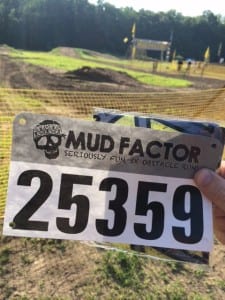 When I first identified this event, I became interested to see what it was all about. I had reviewed the information on a few examples of this event in other areas, so I thought I would give it a run. I was very happy that I entered this event, as it turned out to be a quality outing. The location was only about an hour drive from my house (as travel has become every OCR’s new best friend). The event was held at the Ida West Track and Trail location. The site is a running and ATV course when not hosting a race. Since the topography in that area is generally flat, they picked a decent natural environment to put on this event.

The parking for the event ($10) was very easy and organized, and the volunteers were very helpful in getting everyone in lines to be able to leave without issues. Upon exiting my car, I quickly determined that we were not to be short on heat for the day. It turned out to be about 85 degrees at race time. Proceeding towards the event from the parking area was the registration area. A very convenient transition from parking to obtain your race packet. Another quick and easy pick up, and again; the staff was very accommodating.

From the registration tent, it lead right into the heart of the event. The setup was fairly limited, but had all the necessary items to make it work well. A merchandise tent, bag check, changing tent, portable restroom facilities, a DJ, and a food/beer truck made up the main event area. Some of the major obstacles were visible from the main event area, and the remainder of the event weaved through the wooded areas; so those portions were not normally visible to the spectators. After the $5.00 bag check, I was able to get ready for my heat. 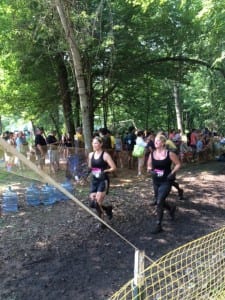 The starting corral was created with some simple fencing, and made for an easy/organized starting area. The heats were taking off in 15 minute intervals, so it made for some decent spacing. I started up front, just to make the transition to running easier with less traffic to begin with. The standard “rabbits” made a dash out of the gate; soon to be held in check by the overall 5K length of the race. Utilizing the natural terrain, and some man-made obstacles; this course did a great job at integrating both into the overall race design. The majority of the trails we traversed were wide enough for about 3 wide running. Cones designated the running lanes as the trail wound through the environment, which came in handy more than once with some potential deviations that were present. With the overall terrain fairy devoid of natural hills, the event did a great job at creating large hills of dirt and sand to climb periodically throughout the race. Large logs intentionally placed, and some of natural means; helped to impede the progress of the runners, and made for some good hurdling during portions of the course. The areas with mud/water were fairly deep, and executed their intended purpose by slowing everyone down. Those with heavy running shoes now must have quickly learned how heavy they can become when filed with Michigan mud and water. Some of the man-made obstacles were well-placed, and well designed. A standard 10 foot wall with rope, and some horizontal slats made for a good stop along the way. 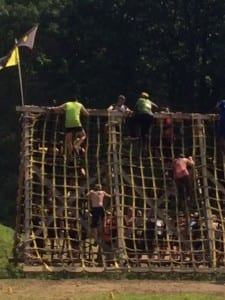 A cargo net strung between a few of the trees on the course in the wooded area also lent its difficulty to some. A large water slide at the event encountered some problems when my heat reached it, as the pump appeared to be picking up too much sediment versus water at the time; and we had to divert around it. At that time of day with the heat, it would have been a nice respite to cool off. Somewhat after the halfway point, a large/dual-sided cargo net wall split the course. It was a good challenge, and certainly slowed some, but everyone appeared to push through it. The looks of accomplishment when the other participants reached the other side was a very rewarding sight.

The track continued to weave in/out of the woods, and also through a natural stream that needed to be forded. Entering and exiting the stream posed a substantial challenge for those with shoes better suited for the street. Thank you Reebok for your all-terrain series, as they dug into all the mud and dirt on the course; making many obstacles possible. Another fantastic feature of these shoes was when exiting the water traps and stream, was the water drainage. No bath-tubbing with these shoes, making the course much easier to bear by not adding additional weight. Mud Factor did a solid job of spacing the natural and man-made obstacles throughout the duration of the course to never let anyone get lulled into too much “easy running”. 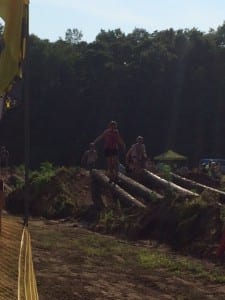 The final obstacle was to crawl under the “kinder/gentler” standard wire versus barbed wire for about 25 yards. The mud in that area was of the extremely viscous sort, and adhered to the other participants and I quite well. I imagine they wanted to ensure that if you had not received enough of a dose of mud throughout the race; that you received your share in the final stretch.The medal handed out was fairly substantial, and with a good deal of quality and weight. The showering area was also near the finished and was comprised of double sided showers. It worked fairly well, however having it a little lower may have allowed for the mud to wash off a little more quickly. Overall, I was very pleased with this event, the course and the staff. Courteous and helpful people abounded at the event, and it was well executed. I would certainly look to participate in this event again next year.

Did you do the Michigan Mud Factor? Share your own rating & review about the event today!