07-12-14 Urban RAID Boston Review!
The RAID series returned to Boston for the second year. The unique urban 5k designs an obstacle course race that occurs throughout the city streets of downtown Boston. The race occurred early enough in the morning that they were able to close a few of the streets. However, they also came up with a creative way to handle the busy streets that needed to remain open, More on that later. Similar to last year, I decided to run in my Elvis costume. I was also joined by Madonna, Michael Jackson and Scoobie-Doo!
LOCATION/PARKING 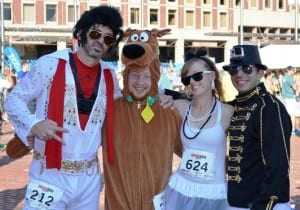 Since parking in the city is limited, most runners were encouraged to take public transportation. We decided to drive to the event and were able to find a parking garage a few minutes away for a reasonable $11. The start and finish this year was switched from Faneuil Hall Marketplace to City Hall Plaza. The area was expansive with a few of the obstacles, including the cargo net climb, right in the plaza. They had vendor tents set up giving free samples as well as high energy music and an MC keeping the crowd entertained. (One note: While I can appreciate hardcore hip-hop, there is a time and place for everything. Before 9:00AM in City Hall Plaza with young kids around is probably not the best place for uncensored DMX. It made for an uncomfortable few minutes with my 7 year old daughter.)

REGISTRATION
We were able to pick up our runner's packet the day before the event at a local Sports Authority, so I am not quite sure if there was any delay at the registration tent the day of the race. The packet included the racing bib with a timing chip to affix to your sneaker. This year, the registration also had the option of paying extra to receive a shirt. I'm glad I did. The shirts were nice green technical shirts and were also included in your packet if you chose to purchase them. They also provided complimentary gear check. Any racer looking to use the gear check was given a small clear waterproof bag to store their items. No large bags, backpacks or other personal bags were accepted. We decided to leave our stuff in the car and only take what we needed. 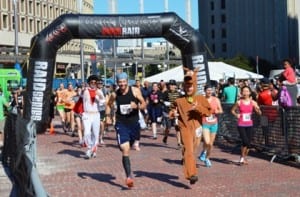 COURSE
When we arrived at the event, we were informed that the race would be delayed by about 20 minutes to allow them to complete the necessary road closures. Prior to the first wave, Beantown Bootcamp held a mini-warmup session for any runners looking to get their blood flowing before the race.

The race started in City Hall Plaza and went around the surrounding streets for nearly a mile before encountering the first of 10 obstacles. All along one of the closed streets were a seemingly endless amount of cone bars which were essentially bars sitting atop a couple orange traffic cones that racers needed to hurdle over. The cone bars were each spaced about 10 feet apart. The race continued through Faneuil Hall Marketplace where we encountered a set of 5′ military hurdles. To make our way over to Christopher Columbus Park, it was necessary to cross the Rose Kennedy Greenway. 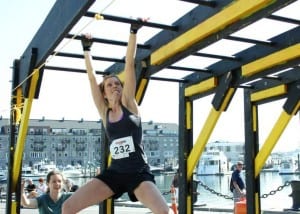 In order to account for the time lost waiting for the red light, they set up timing mats on both sides of the street. Each runner's time stopped when they reached the crosswalk on one side of the street and it began again when they crossed the timing mat on the other side of the street. It was a unique way to keep an accurate time, especially for the competitive runners. Within the “no time” zone was a water stop and an opportunity to catch our breath. We continued to the monkey bars and more military hurdles.

The course returned across the street to Faneuil Hall to the ropes obstacle which was like a “reverse fireman's pole” where you had to climb a knotted rope up through a hole to a platform and then walk down a rope assisted ramp. Immediately after the ropes was a couple tractor tire flips and we were off. Back at City Hall Plaza, we finished up with the final four obstacles. The sandbag carry took us up and around the steps surrounding City Hall and led us to a decent climb up the cargo net that was affixed to the brick facade of the building. Awesome! The only new obstacle added for this year was the slack line. It was essentially a balance walk across a taut strap with an overhead rope supported on a cable to help stabilize. The 8′ finish wall had sections that included rock climbing pegs for those that needed assistance. A short sprint to the finish and it was on to the after party. 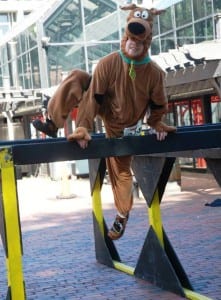 Post race
Once crossing the finish line, you were offered a water and an Urban RAID head buff. No bling again this year. THe after party was at the Hard Rock Cafe for music and beverages. Each race bib included a tear off ticket for a complimentary Shipyard beer. Another appreciated perk was that Urban Raid also offered each participant free high resolution photos from the race a few days later.

Conclusion
Urban RAID does a nice job handling the unique challenges that a city obstacle course race represents. The course was well organized and the obstacles, while not overly challenging, were solidly built and fun. I would definitely recommend this race to anyone looking for something a little different than the typical obstacle course race.

Did you do the Boston Urban Raid? Share your own rating & review about the event today!