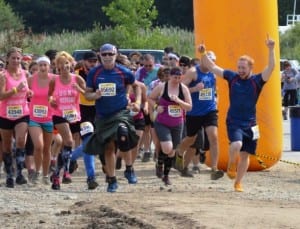 The Dirty Dash racing series recently brought their 5k fun run to the New England area for the first time. Leading up to the event, a few other national races of similar ilk had fallen on tough times. The female only Dirty Girl race series, which held 50 events last year, cut that number in half for this year and recently cancelled a few upcoming races. The 5k Foam Fest that was affiliated with the same company as Dirty Dash also announced that they were closing its doors. This led to speculation on social media that the Dirty Dash race was in jeopardy. However, about a week before the scheduled event, we received an email with race logistics which quelled some of the fears. I signed up for the race through a Groupon deal for only $30 so I wasn't too concerned. The untimed event was billed as a fun run so my expectations were not that high going in.

Location/Parking: As with the majority of national races that venture into Massachusetts, the event took place at Amesbury Sports Park. While a perfect venue for these types of races, the Sports Park has become over-saturated with events. Over the past few years, I've run a bunch of races at the venue and am currently scheduled to participate in six of them this year alone. Most of the returning race series have done a nice job creating different routes in an attempt to keep the races fresh, but it’s hard to get excited about events that continue to use the same venue. Earlier in the year, I ran two races on back-to-back weekends and many of the trails were duplicated. They even incorporated some of the same obstacles! For $10, parking for the race is at a nearby dog racing park and runners are shuttled to the venue. We could hear the MC as we got close but were confused because the main festival area was barren. For whatever reason, they used the smaller field on the side of the sports park for the festival area. While it made the event a little more crowded, it wasn't too bad. Spectators were able to enter the event free of charge. 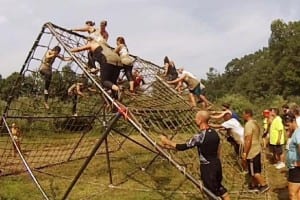 Registration: The email we received included a link to the waiver that needed to be brought to the event. We were also informed of a $1 charge for replacement waivers if we forgot to print one. Really? Before the registration tent, we had our ID’s checked and given a bracelet. I’m assuming this was done to indicate the runners that were old enough to participate in the beer chug “obstacle” during the race. We were then directed to the bag check table where they essentially confiscated any outside food or drink. They were even asking people to empty out their hydration packs which frustrated more than a few folks. I’m not sure where this directive came from, the Sports Park or Dirty Dash. Of all the races I’ve done at this venue, I don’t recall many of them having bag checks, so I’ll assume it was the race’s decision. While I can understand that they didn't want people bringing in outside food and drinks, I think it’s ridiculous to have people empty out their race related nutrition and water, especially since the pre-race email encouraged us to bring bottled water! After handing over the waiver and showing our ID, we received our race packet. A bag check area was also available free of charge to store your belongings.
Course: The course led runners to the top of the hill and through a few muddy pits and tube crawls. We continued across the open field to the A-frame walls that had foot rails and knotted rope for assistance. Next up was the blue pipe hurdles that had 10 PVC pipes stretched horizontally across a mud pit that runners had to navigate over. The first (and shortest) bottleneck occurred at the cargo net climb. By releasing waves of people every 10 minutes, the wait at some of the more technical obstacles was unavoidable. However, since this was an untimed fun run, I wasn't too bothered. 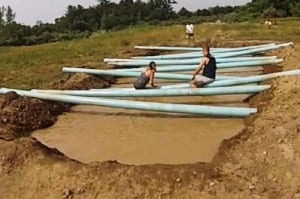 The course headed through the familiar trails of the Sports Park to the inflatable bounce house that looked exactly like the one used in the now defunct Foam Fest series. Hmmmm…A quick leap over a few hay bales to another inflatable obstacle. This one involved crawling across what can be described as a set of inflatable seesaws that were connected together and pivoted up and down as you crossed. Over a few 5’ walls and up a steep incline that had a rope for those that needed the help. One of my favorite obstacles was the mud mines which appeared to be a simple knee-deep mud pit. However, on one side were about 10 small machines that blasted mud at the runners as they passed by. A Dirty Dash member was stationed nearby gleefully controlling exactly when to detonate the mines. The next substantial bottleneck occurred at the slip-n-slide. It was a good 10-15 minute wait to fly down the three lane inflatable side but it was worth it. One of the better slip-n-slides I've done! We headed across the log balance beam over to the “Beer Chug.” Essentially, runners had the opportunity to chug a beer (or root beer for those under age) before finishing the race. I haven’t had a Miller High Life since college and now I know why! We headed down the hill towards the finish but where stopped dead in our tracks by the huge line waiting to take pictures. Immediately beyond the finish line, the professional photographer hired for the race was taking multiple posed photographs of each group of runners, causing the ridiculously long backup. Since the digital photos could be purchased later from the photo company’s website, it was obviously an attempt to get the perfect picture. The photo tent setup should have been moved away from the finish to allow people to at least cross the line first and then decide whether they wanted to have pictures taken or not. Personally, I skipped right past the line. I refuse to wait 20 minutes to take over-priced photos that I wouldn't be buying anyway. Dirty Dash did a great job marking the course with caution tape, making it nearly impossible to get lost. There was one water station on the course and water was also available after the race. With the hot weather though, they could have used at least one more water station. 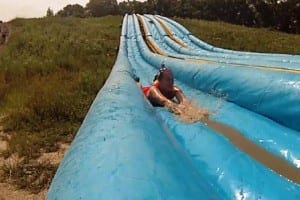 Post Race: After the race, participants were handed their swag. Dirty Dash doesn't give out bling but they did offer separate men’s and woman’s cotton T-shirts smartly wrapped in plastic. Everyone also received a Dirty Dash bandanna, either light blue, white or brown and pig tattoos. As mentioned earlier, professional photographers were also strategically placed throughout the course and offered the digital photos online for purchase a few days after the event. The hoses offered in the wash-off area where sufficient in getting the mud off. Thankfully, they didn't use the giant snow fan that sprays runners with freezing cold water that most other races use at the venue. Please stop doing that! I didn't notice any changing tents. The smaller festival area was filled with the typical vendor tents handing out samples. There was a good size merchandise tent with all things Dirty Dash. Your standard food and beer were also readily available.

Conclusion: Admittedly, I had low expectations going in to this race and was pleasantly surprised by the course and obstacles. While they were not the most technical or difficult, they were entertaining. For the cheap registration fee, I thought Dirty Dash put on a decent event. They also graciously gave a portion of the proceeds to the Special Olympics of Massachusetts. Except for the bag check and long wait times, I would say most people appeared to enjoy themselves. I wish them the best but, with all the competition, I question how sustainable these types of races can be.
Ranking: 3 out of 5

Did you do the Boston The Dirty Dash? Share your own rating & review about the event today!