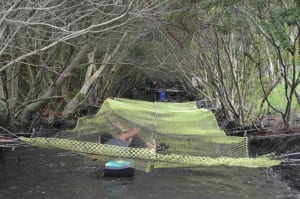 Location
The Mega Mud Run Challenge (MMC) took place at Legare Farms, a 300 acre historic site in Charleston founded in 1725. Legare Farms is a working farm. Participants in the MMC literally ran past free roaming herds of cattle, baby pigs, and the occasional water buffalo. At one point in my tour of the course with the race director, Glenn Herring, a volunteer flagged down our all-terrain vehicle and told us that an injured pig was charging at the runners. What other mud run can claim that?!
Location Score: 4 out of 5

Parking
The parking was free, ample, well organized, and close to the start and finish lines. Enough said.
Parking score: 5 out of 5

Sign-in and Festival Area
The Mega Mud Challenge only drew about 500 runners for the event, so there weren't any long lines to wait in. That being said, the event ran out of t-shirts and the liability waiver ended up being a blank sheet of paper where a couple dozen people ended up printing and signing their names attendance roster style. I’m not sure that would hold up in court, but it is what it is. Most mud runs include a free beer. MMC did not. In general it was a lackluster festival area. I did score an $11 off coupon to Complete Nutrition though which was cool.
Festival Area Score: 2 out of 5 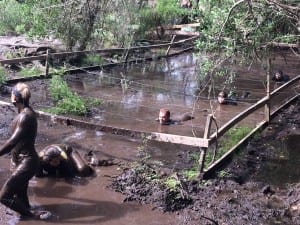 The Course
MMC is an untimed event for individuals, but is timed as a team event. There was little difference between the team and individual events until the end of the run. Over the final 100 yards, two members of the four person team had to fireman’s carry the other two team members across the finish line. There was also a one minute time penalty assessed if a team didn't complete an obstacle.

The run started out with a short jog to the first obstacle which took us under netting strung across a tidal stream for about 50 yards. The MMC happened to coincide with high tide. According to Glenn, in years past this obstacle was a crawl through mud. This year added the challenge of the mud being covered with about an extra two feet of tidal salt water. High tide would play a part throughout the event. The water was so much higher than expected, some of the course signs were barely poking out above water. 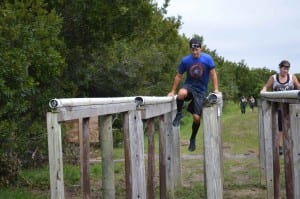 The course included a couple slatted walls, a monkey bars obstacle, some cargo nets, rope climbs and a rope swing, and other traditional OCR obstacles. What the MMC did extremely well was use the natural terrain to its advantage. About 25% of the course had you running through water or mud of some sort. This significantly sucked the energy out of most of the runners. Glenn also seemed to alternate upper body intensive obstacles with the thigh burning slogs through the water and mud. By accident or by design, this was an effective one-two punch that slowed down 90% of the runners after the first mile.

The coolest series of obstacles had runners trek to a series of two islands on the farm. To get to the first island you had to walk across a tightrope strung from the bank of the stream to the island. There was another rope above your head to hold onto to help your balance as you traversed the stream. Once you conquered that, you got to the “jump hang”.

The jump hang started from the bank of the first island. You had to launch yourself, American Ninja Warrior style, off a sheet of plywood floating on Styrofoam to attempt to reach a suspended cargo net a short distance away. If you were able to latch onto the net, you traversed the 25 foot horizontal cargo net to the next island. The final obstacle to get back to land was a series of seven sheets of floating foam backed plywood spaced about two feet apart. The sheets of plywood had to be hit as close to the center as possible and as quickly as possible to avoid tipping over into the stream. At the end of the last sheet of plywood was a gap of about 15 feet to the far bank. If you couldn’t swim, God help you, but there was a volunteer close by with a floatation device he could toss to non-swimmers. 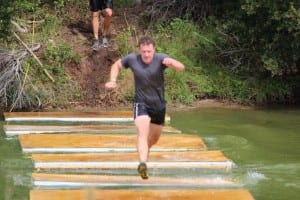 MMC failed on its Tough Mudder-like electric eel obstacle that took runners under electrified barbed wire. About an hour and a half into the run, the battery that electrified the obstacle died. It wasn't publicized to the runners that it was a “dead” obstacle so it still caused alarm to runners that approached it, but a few adventurous runners who touched the “electrified” wire were disappointed that they didn't get zapped with electricity. It was a rookie mistake that I am sure Mr. Herring will correct before the next time the MMC is held.
Course Score: 3.5 out of 5

Event Rating and Final Notes
The MMC started two years ago. Glenn Herring clearly has a passion for his Mega Mud Challenge and oversees the building of each obstacle and designs the layout of the course himself. This is both a good and a bad thing. Some obstacles were hardcore and fun; others definitely had a homemade feel to them compared to a Spartan or Rugged Maniac. MMC is a new player in a growing sport. Glenn’s goal is to add new obstacles each year and develop his event to be the premier obstacle course in the Charleston area. Getting over the few rookie mistakes and polishing the event as a whole could build the Mega Mud Challenge into just that.