The Bonefrog Challenge recently returned for the third year to the New England area and I had the privilege to attend the event for the first time. The regional race, created by Navy SEALs and appropriately held on Armed Forces Day each year, was developed to test athletes to move beyond their comfort zones and push themselves both physically and mentally. With a course that boasts over 50 obstacles and 10 miles of rugged, mountainous terrain, it definitely accomplishes this goal in spades. The aptly named race is truly a challenge and requires athletes to be functionally fit to complete the course.

The Bonefrog Challenge is held annually at the ski slopes of the Berkshire East Resort. The scenic venue provided the perfect backdrop for the race with over 4000+ feet of elevation gains. The parking lot was steps from the resort and cost the standard $10. Late arrivals we redirected to a nearby lot and shuttled to the venue. The registration process was seamless. There were plenty of waivers available for people that didn't print them out prior to race day. However, a plumbing issue inside the resort limited the bathrooms facilities to only three porta-potties. There was a substantial line when I arrived which was unwelcome, especially after a two and a half hour ride.

Participants were given a choice of either running the full 10 mile course or a shorter sprint version. The course routes were distinguished by different colored paint and signs throughout. Waves of runners were released every fifteen minutes and were sent off with high energy music pumping. The volunteers were enthusiastic and helpful and there were six water stops on the course. However, many of the stops were slightly disorganized and didn’t appear to have enough water to last for the whole day. 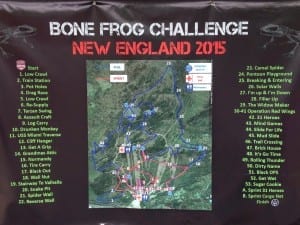 The varied terrain included some technical trail runs, muddy paths and some epic climbs and descends. The entire mountain was well utilized and the view from the peak was amazing. While the trails were great, the strength of the Bonefrog Challenge lies in its hard-core obstacles. A race like this defines what a true obstacle course race should be. The term “military-style obstacles” gets thrown around by almost every other race in the industry but most of them pale in comparison to the ones here. All of them were solidly built and spaced evenly throughout the course. The penalties for failed obstacles included burpees, push-ups, sit-ups and others.

The relentless assault of obstacles (officially listed at 53!) included many industry standards including tire drags, mud crawls, rope swings and climbs, multiple walls (vertical, traverse, inverted, ladder), cargo net and balance beams. The course also included five carries: two of the sandbag variety with the second one forcing runners to fill up their own bags (nice touch) , a log carry through a single track trail, an uphill tire carry and a sole-crushing ammunition box carry literally steps from the finish. Your upper body strength and endurance was put to the test with numerous rope assisted vertical wall climbs and four hanging obstacles including peg-style monkey bars, standard monkey bars that were accessed by a rope climb and a long, elevated set of monkey bars positioned near the finish line that had a net underneath to catch anyone too gassed to complete. The most difficult obstacle of the day, Get A Grip, involved a row of suspended handles at varying heights that doomed anyone without superior grip strength. For a complete obstacle recap check out the video. 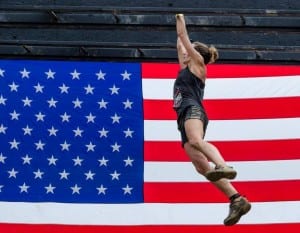 All participants received a quality Bonefrog medal, distance specific T-shirt, complimentary beer and free digital photos. The festive concourse included a handful of vendors, merchandise tents and a few food choices. Spectators were allowed free access to the venue and the fan friendly layout allowed for some great photo ops.

Overall, Bonefrog Challenge is the real deal and more than lived up to the glowing reviews that they’ve received. It easily stands alongside Spartan Beast Killington as one of the most challenging and demanding races I have ever done. I respect that none of the obstacles were diluted in an attempt to appeal to a broader audience. The quality of the race caused participation to swell to more than double the runners as the previous year. However, this success led to the substantial logjams that occurred at a few of the obstacles. The Navy SEAL involvement and military theme also made for a more meaningful event. If you are an OCR enthusiast and want a challenge that tests your strength and endurance, Bonefrog is the race for you.

Have you done BoneFrog Challenge? Share and Rate Your Experience…