The Mogollon Monster Mudder a 5k race with over 30+ man-made and natural obstacles returns to town of Payson, Arizona at the rodeo grounds for another great race for a third year in a row. Last year in only their second year they had 345 participants. This year was proof this race is definitely growing in the OCR Arizona community. Registrations for the 2015 race showed a significant increase from the previous year. In speaking with race director Cameron Davis he told me to be ready for new challenging obstacles, way more awesome mud, and some very cool prizes for the top three men and women. 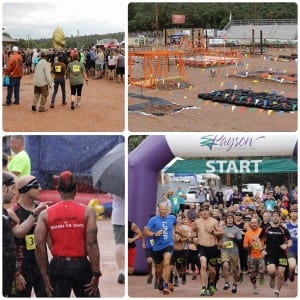 The weather in June in Arizona is typical nice, warm but not too hot. But due to some unseasonably rainy weather this made the 2015 race a wet and chilly one. The rodeo grounds made for easy parking and close to the race starting line. The weather caused some delays in the registration process and we found ourselves waiting in line for 35 minutes. The location of the registration caused lots of congestion and people having to cut between each other to get through. We offered some suggestions on improving that for next year.

I was signed up for the 9:00am first wave of runners. Along with other competitive OCR racers that made the trip from other parts of the state including; Eric Acuna, LaShay Marks, Robert Grabeck, Dan Pryzg, Hector Acuna and Matthew McDowell just to name a few. Many of these athletes ran it last year, including myself.  We were all excited about this years' race and what they had in store for us.

The race started out with a quick 100 yard sprint to the first obstacles. We traversed a natural pile of large rocks then quickly onto the “timber climb.” Once over that it was a mad dash for the “Hells Gate Leap” off a 20ft wall into deep muddy water. This obstacle really challenges many of the racers. You either take the giant leap from the top into the cold water, or safely climb down to the bottom and jump in. Then came a series of obstacles that were easy but also still challenged you. With the “Tangled Forest” you made your way through these bungee ropes and onto the 7 foot “Big Wall Climb” which was a bit slippery from the previous water obstacle. After this the course opened up a bit with a few staggered obstacles to challenge your endurance. A tire drag for about a 100 yards followed by the “Hurdles of Death” then right into “Tire Pummel” which as an agility test of running over a series of tires. This brought us to the “Sand Bag Lug” where you had to haul one sandbag through the water and under the net all while keeping your bag with you. The earlier rain soaked this course and provided a fun and slippery challenge while we did our best to not slip and fall while running through these obstacles. 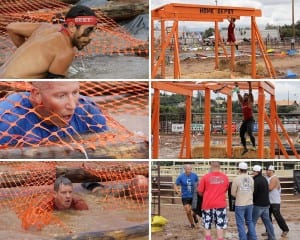 Now we found ourselves climbing up the big pile of dirt they called “Volcano Mountain” just a quick scramble up this hill then back down to plunge into the “Monster Mud Trench” which was 5 feet deep and provided enough depth for us to swim in this cold muddy water. Finally we got about a half a mile of running before climbing a few fences to the “Tunnel of Doom” a very long and dark tunnel that you could hunch over and walk through.  This was not very easy for a 6'4″ guy like me. That obstacle really slowed me down which was a bit frustrating. Keeping with the tunnel obstacles we now were faced with “Belly Creep” which offered three tunnel choices for racers to get through. At the end of that you fell a short distance into a pool of water. After crawling out of that you had “Artic Trench” very close and also was a tunnel you had to crawl through. Moving through that water you found yourself at the “Wall of Rocks” which we had to climb up and over. This was a bit challenging due to the fact they were very slippery and soaking wet. I made my way over those and was happy again to see that they course now lead us out a bit so that we could just trail run for about a half mile. A simple trail that was not very technical.

As the trail came to an end this led us to one of my favorite obstacles “Big Foot Lookout” which featured a short crawl through a tunnel. At the end of this tunnel you had an 8-foot drop into a deep and extremely muddy pool of water. After you made your way out of that on the other side was another pool of quicksand like mud! Very thick and textured. I sunk all the way down and almost lost my shoes. It was fun to watch a few racers tackle these back to back obstacles. I have to say the placement of “Gauntlet” was perfect. We now had about 75 yards of just water to walk through. What an awesome way to clean up a bit before having to run down the rocky stream on our way to the “Mammoth Mud Slide” where we had the chance to get wet and muddy once again. But seriously who doesn't like a waterslide into muddy water. 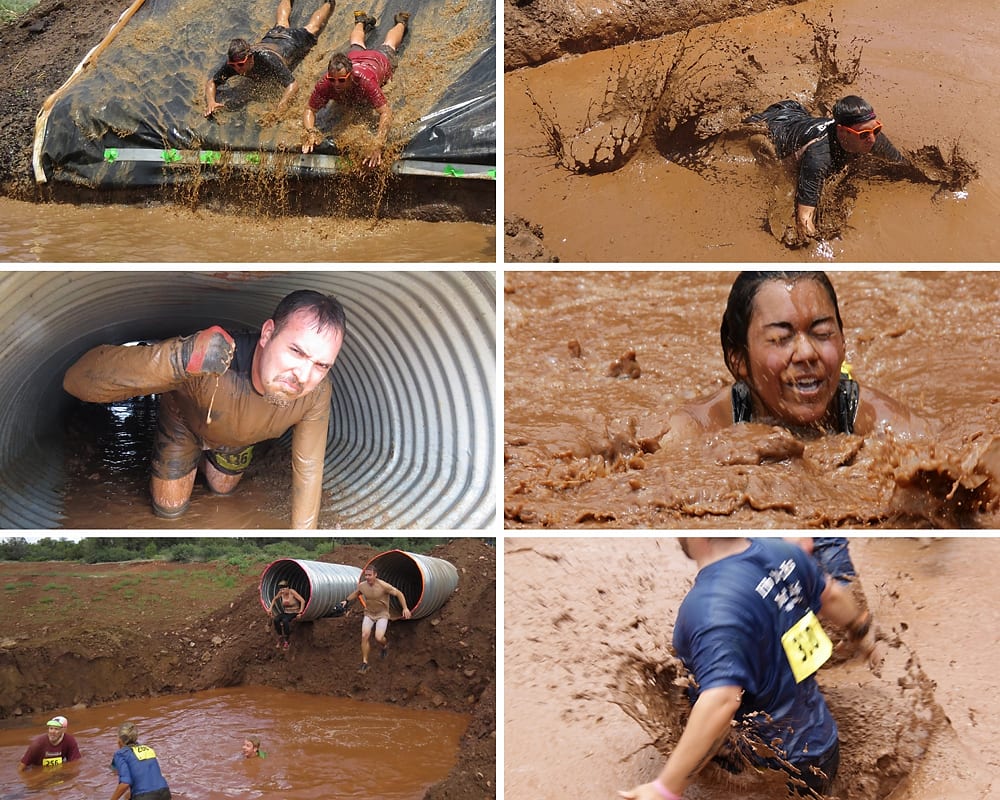 At this point the course now had one of its longer runs on “Sasquatch Mountain” and “Forbidden Forest” this stretch of trail allowed us to open up the speed a bit more. There were a few spots we had to climb and boulder just a bit but that made it fun. As we passed the “Point of No Return” we had less than a quarter mile until we entered the “Coliseum of Terror. Created after the ancient Roman Coliseum's of old this is your final test. Family and friends will cheer you on as you enter the Coliseum. This part of the race has 10 obstacles that are sure to challenge you mentally, physically and emotionally. After a series of up and down the bleachers you are then ready to enter the coliseum but first you must get past the “Gladiators” as they try and knock you down with these soft football pads. I remembered that from last year and this year I was ready for them. They were nice young men from the local football team and they understood how tough they could be with each person that came through. I personally hit them pretty hard and I nearly got knocked over. Now you're ready to get wet again with “Barbwire Hell” a series of crawling low in the water to clear all the barbwire.

Next up was back to back monkey bars that were very challenging this year. This time they did not have water below them just the ground to land on. The next obstacle is kind of a scary one for me personally and can be tough if you are afraid of going under water in a tight spaces. The “swamp log roll” has racers going under a series of logs while holding their breath as they come up your head hits the mesh netting they have over the top of the entire obstacle and you have to do this four times on each series. As I battle through both sets of these I found myself getting through them very quickly. After we powered our way out of this obstacle we did another series of tires to test your agility once again. I found myself very tired with all these obstacles so close together. Up next is a new obstacle that was designed by Home Depot called “Claustrophobia” designed to test your strength, agility and your mind in a very close space. Above you was heavy water weighted plastic running about 40 feet in length. You were to crawl on your belly and make your way through to the other side. There was some technique that you needed to do to maneuver through and it was challenging and heavy. People coming out of this had big smiles on their faces with a feeling of accomplishment. And I agreed it was one of the tougher obstacles we had that day. 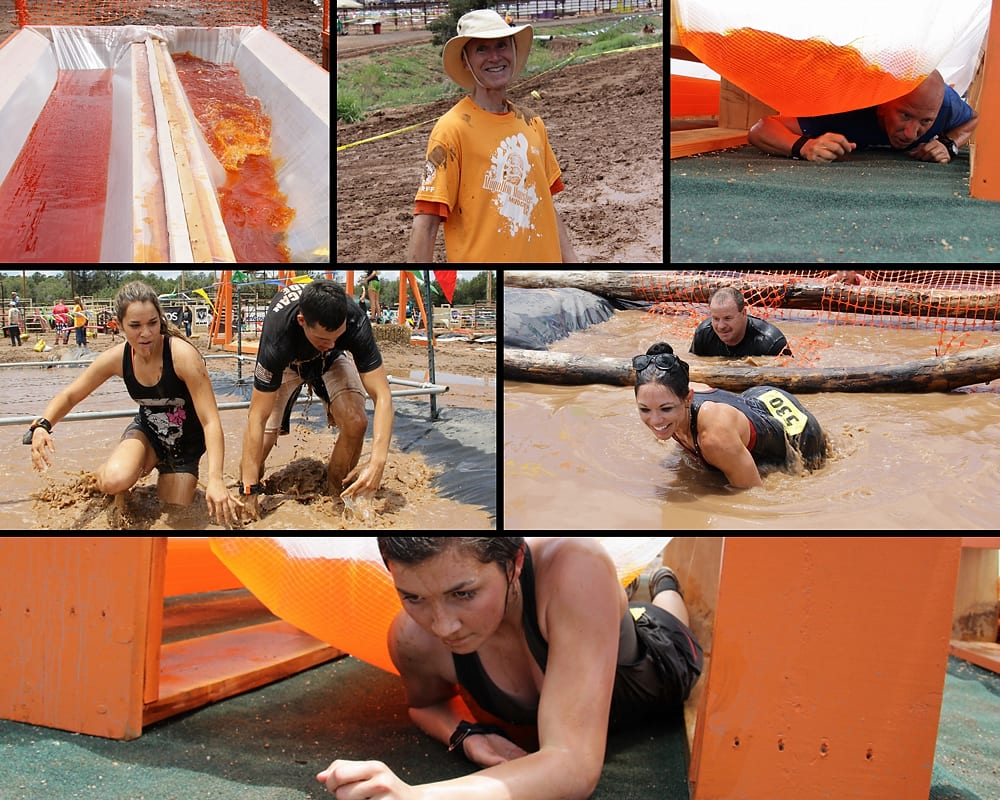 After finishing “Claustrophobia” the finish line was very close. We still have a series of fun but easy obstacles to make our way to the finish. What's nice is now you could see and hear all the family and friends cheering you on from the stadium bleachers. This really helped pushed you till the very end. Climbing over the “A-Frame” cargo net provided a nice view of the entire stadium. Right after that we had another small muddy water pit to jump into followed by a balance log obstacle. Another new obstacle was a double rope traverse walk across a water pit. This was fun and challenging really testing your footwork, balance and a bit of upper body strength. Next up was a series of hurdle jumps leading you into the final stretch of the race. Now it was time to get low and crawl through some tractor tires they had stuck in some mud a series of three sets of those before a small sprint to the finish.

Once again the Town of Payson put on a spectacular OCR race. They really stepped it up this year with more challenging obstacles and the promise of more mud and they definitely delivered that! This is a very challenging course. With over 19 OCR races I've completed this was my second year at the Mogollon Monster Mudder and I continue to say this course along with the 5,000 feet of elevation is a beast of a course. What I loved about this is the course is designed to challenge the top elite athletes and also fun and challenging for family and kids.  The energy from racers, spectators, staff and volunteers was amazing all day and made for a better event and race. Next year I am hoping to see bigger things and maybe even an elite heat for the more competitive racers.

For swag this year for finishing the race we got a very nice light weight shirt and finisher's medal that matched in colors. I am not sure what they did last year for the awards for the top 3 men and top 3 women.  But this year they were awarded some very cool prizes I have not seen at any other race. The top male finisher was Robert Grabeck with a time of 31:24 and his prize was a large gas grill and a small hatchet with engravings on it. The top female finisher was Alesha Jones with a time of 36:04 and her prize was a $600 gift certificate from Big O Tires and a smoker grill; pretty cool stuff if you ask me.  The second and third place finishers also received prizes.

The festival area and festival rocked and hosted a great time.  The combination of challenging/tough and fun obstacles were amazing and the way the course used its location and surroundings helped this course stay packed with obstacles.  That is exactly what they promised and they certainly delivered. I am rating the Mogollon Monster Mudder race a 5 out of 5 stars. The race was top notch and as always every obstacle was built out of top quality materials and construction and I felt very safe.

Have you tried Mogollon Monster Mudder? Share and Rate Your Experience…

About the Author: Jamie Hines

I'm an athlete that competes in OCR, Trail races along with other endurance and strength type competitions. I'm also a professional photographer & videographer with over 14yrs experience. We run, shoot, and write fitness and race reviews