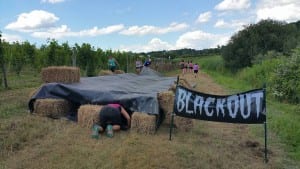 I pride myself in not being just someone that runs the larger OCR company races, but also goes to the less known and what some would consider less challenging (not me) obstacle courses. Vino and the Beasts is a perfect example of one of those types of events.

The festival was set up on a nice and flat area surrounded by fields of grape vines. The pre-race MC did a good job of informing each wave when it was just about time to start and they played good music as well. The registration, wine tent, several food trucks, and a few vendors were all not far from each other and made for an easy to navigate festival area. Later in the day after all the waves were completed the festival changed from pre-race mode to post race party mode and they switched from the MC music to a live band. The only odd part was for a short period of time both the live band and MC played music at the same time and it was a bit confusing. I also am not sure where the porta potties were located, because I didn’t see any in the festival area.

This was a smaller event with a smaller turnout than I typically see at other obstacle course races, but to be fair, it was a very hot and humid day and only about thirty minutes away from this event was also an Insane Inflatable’s event/race, so pretty much anyone local with children probably opted for that event.  With all that said those that attended did look to be having a good time and enjoying the wine and live music.

To envision this course, the festival area as noted above was in a nice flat section of the venue/property but the course pretty quickly made a turn and went up what wasn’t the highest or even steepest mountain, but with that said was a very challenging terrain to run on. The course started with a very brief sprint and made its way around a lake on the property and then came to the first obstacle, “Wine Me Up”, which was a ladder wall climb that wasn’t such a bad challenge for any of the racers I saw on the course with me. The course continued straight ahead for a very short sprint and up next was the next obstacle “Mount Vino”, which was a very challenging curved rope wall climb. I saw several racers struggling with this one and I even helped a racer just to my left get to the top and up and over the wall. After making it to the top, it was a nice and easy climb down a ladder wall. At the point, the course made a turn towards the above mentioned mountain and it was time to start going up and deal with the incline and scorching sun. It was at this point, I started to see a lot of the racers go from a decent sprint to a slower walking pace. The course went for what I want to say felt like a good mile before it made its way to top of the little mountain with several zig-zags through the grape vine fields before coming to the next obstacle “Walk of Shame”, which was a series of two balance beam obstacles, I have to give the volunteer at this obstacles his props, as he was lending a hand to anyone that asked. The course then continued on for another decent distance sprint and up next was “Got Sack?” which was a potato sack hop, which my studded Icebug Zeal’s on; it was difficult to get in the bag, so I stepped on the back and hopped the whole way. I am never a fan of this obstacle, as I just stink at it! The course made its way around another section of rows of grape vines and came to “Tangler”, which was a very long fishing type net that racers had to crawl/fight through. The was one of those net type obstacles that I always dread because my hydration back pack always gets hung up, lol. 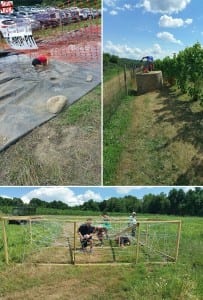 After “Tangler”, the course continued for a brief sprint to “Down the Shoot!” which was a fun water slide down a slippery and wet tarp! A short distance later was “Vault to Vino”, which was a four foot over the wall and then an under the wall and then one more over the wall.  The next obstacle on the course was “Blackout” and this one reminded me of an obstacle I did at a previous Bone Frog Challenge, you crawled into a completely pitch black crawl and then eventually came out the other end through some heavy and very hot draped black tarps. This obstacle is far more challenging on a hot and humid day, so it wasn’t some walk in the park. At this point the course went for a short sprint and then entered a section of grape vines and went down a row with grape vines flanking both sides and had a series of at least five hay bales to climb/jump (some walked around) over. I have to continue to point out, with little cover from the scorching sun, obstacles like this kicked most of us racers ass. The course went on for a short time more and up next was “Valley of the Vines”, which was exactly what the name suggests, a decent sized box structure that had a boat load of bungee cords crisscrossing which made for a challenging obstacle to get through; especially with other racers in the same obstacle at the same time. The course has another decent distance sprint between two sections of grape vines and up next was an obstacle I was very happy to see, “The Mash Pit”, which was a crawl under wires (not barbed if I recall) in some cool water. I was so happy even coming later in the course to get a chance to get in some water and cool down! The course went on for a short time more and it was time for the last obstacle on the course “Web of Winos”, which was a lose cargo next climb both up and down! The course had one last trail sprint and then came to the finish line.

When you combine the hot & humid day, the hills/mountain, and the twelve obstacles this was a very challenging course and even though Vino and the Beasts had a smaller turn out, all the racers and spectators appeared to me to be having a great time and many stayed after to enjoy the live band and local made wines. I am happy I ran the course and I enjoyed having a glass of wine both during (one of the water stations had wine) and after the race. 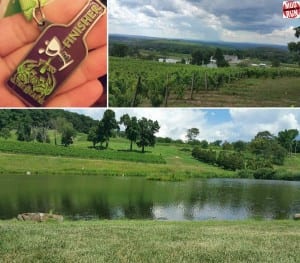 The schwag is a really nice dry-fit type shirt and (a on the smaller side) finisher medal. But the medal is shaped like a bottle of wine and very unique and says “finisher” on it which is always a plus in my book.

Registration went smoothly, the volunteers and staff were all very polite and did a great job, the schwag was cool, and the course included some both fun and challenging obstacles. The festival area was clearly a more adult friendly setup, but this is an event that was hosted at a local winery and the idea is to stay after and enjoy hanging out and drinking the local wine, so I don’t think they expect many kids to be brought to the venue. I spoke to my contact with Vino and the Beasts a few days after the event and she explained the porta potties where actually in the festival area, but I didn't see them because one of the food trucks blocked my view to them. I rate the event/course a 4.75 out of 5 stars.

This event/course is another example of an obstacle course race that is somewhat outside the typical OCR box and will not be for everyone, but with that said, I saw and can think of a lot of OCR racers that would/did enjoy Vino and the Beasts and these types of events are good for the continued growth of the OCR industry and I would definitely do another Vino and the Beasts in the future.