Wintergreen, very few events regardless of which OCR company is doing them, brings to mind such suffering. While Spartan does have events that are more difficult, this is the mass event which everyone respects. The weather this year was a huge improvement from last year. The few days leading up to the event looked like it could be a repeat of the rain and fog. But Spartans everywhere prayed to the proper gods and the skies opened to allow for beautiful views of the epic scenery and a light breeze to keep it reasonable, but in true Spartan fashion that is where the nice things ended. 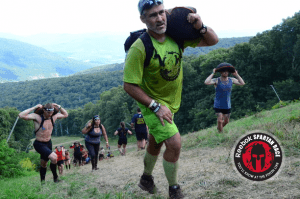 Norm and the rest of the Spartan crew did an awesome job layout a great course that would have been great as originally set, but a few words from Spartans made them adjust the course to add in the entire elevation gain of the Virginia Sprint onto the Super. The quick way to cover this is to say go up and down the mountain multiple times, but that makes it sound simple. While the ups were mostly on the ski slopes the downs were mostly in the woods along rocky, root covered loose dirt which made for slow going. Spartan estimated an 80 minute fastest finisher time by Matt Novakovich at just under 115 minutes. Spartan moved around some of the obstacles from the previous layout which made for a better event in my opinion. While Wintergreen is very much a leg eating machine, and the upper body work was saved until the closing miles, this course still ate up and spit out a lot of competitors.

The rope traverse was a nice addition to give the legs a little break and warm up the upper body. Personally I 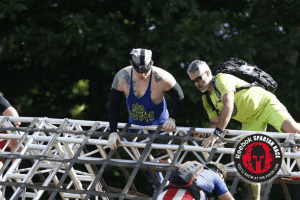 would like to see a few of the other upper body obstacles more evenly spaced but getting the equipment to some of the areas could make that near impossible. With 29 obstacles, this year spread over a 9+-mile course, and I have seen some GPS posts showing 11+ miles, the layout was still heavy ended as are most Spartan events. The only obstacle that I had any issues with was the multi-rig. I think it needs a little more height to it. I watched a number of guys 6 feet plus dragging toes even with their legs pulled up and arms bent. The rig was fine with the items, rings, ropes, pipe and more ropes, it was only the distance between the items and the ground. The Spartan monkey bars are some of the most fun and tough ones around, the constant change of height has a lot of people doing burpees. The only thing I would change with them is to have it split into two sections with one of those having the bars a little closer together. I say a number of the ladies and some shorter guys who just did not have the wingspan to reach the next bar. (Editor’s note: The Spartan Multi Rig is mandated to no higher than 7 feet tall to avoid fall-related injuries) 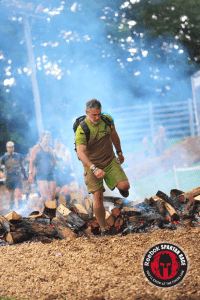 Spartan was gracious with the rope climb in that they have changed out the ropes to a little larger diameter and left a few with no knots. I have been looking for those since my first Spartan and was happy to see that a rope climb could finally be done with fighting over knots that only hold the mud.

To sum to all up Wintergreen while “only” a Super is a beast. Few other events strike both fear and respect into the normal OCR racer. I still think that this event is not for everyone, it is brutal terrain the weather is unpredictable at best, and the layout will eat racer up like a pack of hungry wolves. That said I am ready to sign up for next year’s Wintergreen. Let the training and suffering begin.

I need to send a special thanks to Blythe Kirksey for the pre-race pic.

Have you race at Wintergreen or done another Spartan Race this year? Share and rate your own experience and share it with the world…