The first ever Chicago area Battlefrog was held on September 19th at the Grand Geneva Resort in Lake Geneva Wisconsin. The winter ski resort located about an hour’s drive from Chicago and Milwaukee provided excellent terrain for what is becoming known as one of the toughest OCR series around.

Consistent rain the previous two days before the race set the stage for a slippery track on the technical trails around the resort. After arriving at the event with my wife and kids I found that the regular 10 dollar parking lot was a half miles walk away while the 25 dollar “VIP” lot was located right in front of the registration tent.

None of this was explained on their web page or through email. With young children racing with me I had little choice but to park in the 25 dollar lot.

At the registration tent only one volunteer was checking in the Elite racers and the first of the Open wave class athletes to arrive. As we were waiting in line more check in volunteers finally showed up to get the crowd registered and moving on to the festival area. That’s the last negative thing I have to say about the race because the whole rest of the day was pure awesomeness! 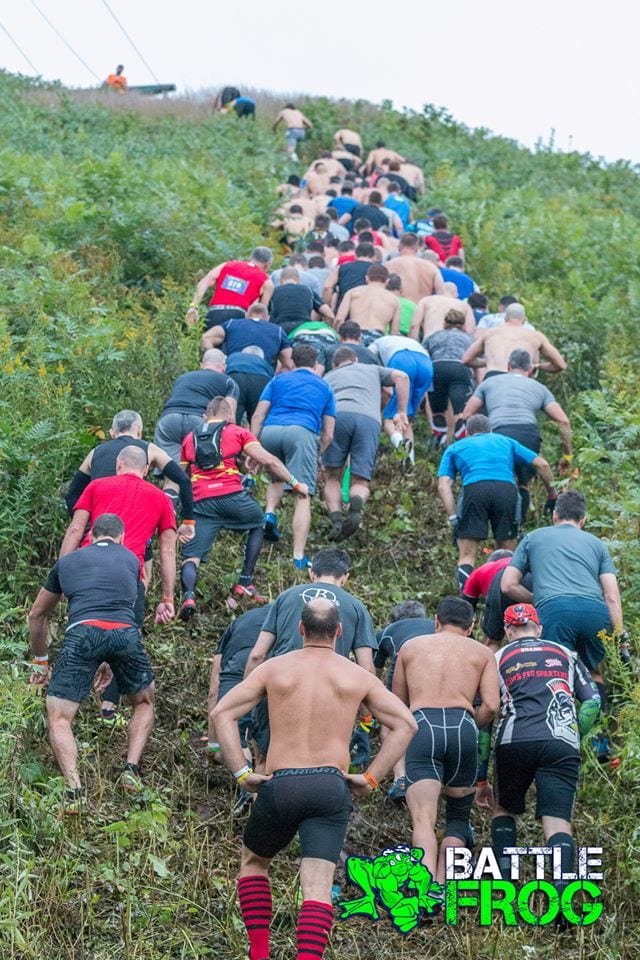 Walking into the event area you were greeted by the voice of Coach Pain {DeWayne Montgomery} pumping up the crowd on the microphone while you got a chance to scope out the ski slope and surrounding woods. The BattleFrog shop and numerous other vendors were right on your way to the bag check and restrooms.

Once competitors got settled in and warmed up they headed to the starting corral which, in true Battlefrog style, was right at the bottom of the ski run. Yep, obstacle number one was to run up that muddy slope.

Once we got to the top of that hill it was time to grab a wreck bag for a little down and up the hill fun before swinging us around to the Platinum Rig. This Elite band stealing obstacle was backed up with athletes due to its difficulty and mandatory completion by Elite racers, many of which were on their second of third attempt.

Battlefrog’s placement of this obstacle right next to the festival area made for great photo and video opportunities. Waiting for racers next along the muddy course were some of Battlefrog’s signature obstacles including inverted walls, the A frame cargo net, the in and out, and the Normandy jacks which were actually under water due to the heavy rain. 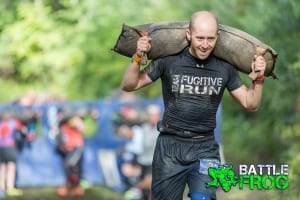 Making our way out of the marsh we started a gradual climb back up the ski hill through wooded terrain, which master race course designed Chris Acord used to his advantage sneaking in dual 12 foot rope climbs, the ramp walls, inverted walls, and a rope traverse.

After athletes finally made their way back to the top of the ski hill we were met with a nasty jerry can carry on a rock covered and slippery trail down the side of the hill and back up. Luckily for us there was an aid station positioned at the jerry can drop off cause most racers were really gassed at that point.

Battlefrog’s version of the balance beam walk was next up with a unique twist, you were required to walk the beam while carrying a wreck bag with you. Athletes were starting to get pretty tired at this point along the 5.8 mile course with the Delta ladder, 100 yard swim through beautiful Lake Geneva, and tip of the spear staring you right in the face. 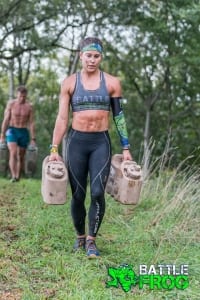 One of the most unique obstacles found near the end of the course was the mounds of grounds. A water slide down and up a muddy hill where a ton of coffee was used at the top of the hill and had to be the best smelling obstacle I’ve ever seen. With the pleasant aroma of coffee all around us we coasted back around a turn and back to the start finish area where an awesome looking Battlefrog medal was given and finisher’s photos taken.

My overall assessment of this race was that The Beard {Chris Acord} did all that he could to make this course tough, and it certainly lived up to the great reputation Battlefrog has among racers looking for a challenge.

Have you done a Battfrog Series Race?  Leave your own BattleFrog Series review and feedback…