How do you define the Epic Series? Sometimes, you can define something by what it isn't; in the British comedy Blackadder, sidekick Baldrick once wrote a definition of “Dog: not a cat.”  The Epic Series is not a mud run, it is not a strongman competition, and it is not the Crossfit Games – but it has elements of all of the above.  The brainchild of Aaron Ward and Tim Fitzpatrick, The Epic Series originally derived from Crossfit and has undergone numerous changes as it has evolved through seven events since its inaugural run in April of 2013.  It is a “functional fitness challenge”. The Epic Race is divided into two parts; the basic race that everyone does, and a bonus Elite competition that was itself split into Strength and Endurance divisions.

The event took place at a local park, making a short, level course with ten obstacle stations, many of which had multiple components.  At the start gate, heats of 10-25 people were released onto the course every 10 minutes. We started with a PVC flagpole, and did a quick lap of the park, then hit our first obstacle, the Atlas Stones. 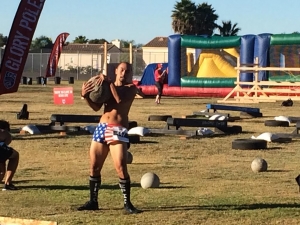 After the Atlas stones was a rope climb, “Sack Attack”, an old fashioned sack race for ~30′ or so and back, then there was a keg hoist (three different weights here, color coded). The intermediate level felt very light to this Spartan, who has gotten used to progressively heavier Herc Hoists at several venues this year.  After the hoist was “Poles of Glory”, a heavy wooden pole attached to a hinge that had to be flipped a prescribed number of times before continuing.  The next obstacle was one of the most challenging – a metal I-beam on a track that you had to knock to the other side using a rubber-coated sledgehammer.

A short low crawl under Bungie cords (on grass this felt positively luxurious), a balance beam, navigating through crossed wires, a 4′ wall and an adult-sized bounce house to crawl and climb thro 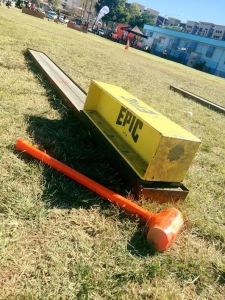 ugh were all part of the next station.

Next up, buckets, partially filled with water, sealed and color coded for difficulty, for a lap of the park. Drop the buckets, grab cement blocks with handles for a short but heavy farmer's carry, then we were on to an obstacle that required precision instead. Grab two baseballs, and throw them at a series of tires hung on the backstop; a bullseye lets you continue. As someone who was never exactly a star on the baseball field, this took multiple tries, and it can be duly noted that each successive attempt had me taking a few steps closer to the target.

Once I finally made a decent enough throw to continue, it was on to one of my least favorite exercises of all time; burpee box jumps. I knocked out my minimum of 15 here, did a quick tire drag, and then grabbed a slosh pipe for another lap of the park.

Dropping the slosh pipe, I proceeded to the plank station, with 1, 2, or 3-minute hourglass timers. You could hold any style of plank, or switch amongst them (standard, forearms, side plank), and they weren't overly picky on form here, at least not for the heat that I 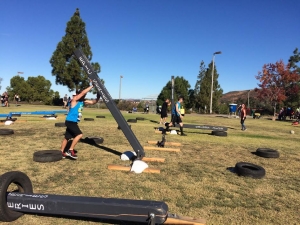 participated in.  This lead to a tire flip station, followed by the silliest part of the race; big inflated balls to bounce a certain distance and back.

Next was an “obstacle” whose only real purpose was to make people spend a little more time on the course, and maybe give everyone a rest; we had to transfer water from one trash can to another using a small pitcher.  This was followed by a deceptively simple obstacle: a thin rope suspended at knee height. The objective here was jump over, go under – 15 times. One last lap of the park, this time balancing a partially filled keg on my shoulders, and I was done. A sweet medal around my neck and an ice-cold coconut water.  From start to finish, at a pretty leisurely pace, took roughly 45 minutes. 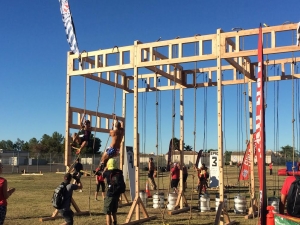 The EPIC Elite Competition was run after the EPIC race. It involved a one at a time, timed sprint style workout consisting of a variety of movements such as the tractor pull, deadlifts, Atlas stones, rope climbs and all sorts of other badass exercises.  The Strength division involved fewer reps at a high weight while the Endurance division was lower weights but higher reps for each exercise.  The winners of the elite competition received a very cool looking WWE-style championship belt.

It should be noted here that there were some complaints after the competition regarding scoring discrepancies in this section, and a bit of bitterness from athletes who believed they should have placed higher in the rankings for their accomplishments.  The race directors addressed this quickly and publicly on their Facebook feed. 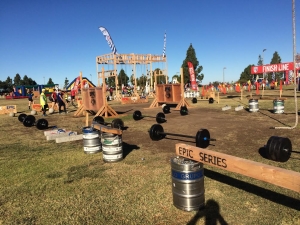 Logistically, the event can be run at any open space making it very flexible and no doubt affordable to put on (at least, in comparison to traditional OCR's). A bit more attention spent on logistics may have led to easier parking, and a few rented porta-potties would have relieved stress on the park facilities, which aren't intended for that big a crowd.

Over the course of the day, 400-500 athletes participated in the event.  They had plenty of enthusiastic volunteers on hand to cheer on the athletes and describe the rules at each station.  There was a decent village with sponsors and affiliated gyms and apparel companies represented.  The energy levels were great, and it was a fun and different way to get your workout in on a Saturday morning, and come away with a nice finisher shirt and medal. Clearly, they're still tweaking the formula, but I think it shows a lot of promise as a new hybrid event that can increase the crossover between Crossfit and obstacle course racing.