The Tough Mudder crew set up shop this year in one of the most fantastic locations imaginable.  The 10+ mile course was literally along the New York Harbor.  Mudders spent the weekend with a little less mud than what you would expect at a typical event; however the views of the Statue of Liberty and The New York skyline made this an unforgettable event.

The Tough Mudder team had their obstacle to deal with at Liberty State Park.  Listening in on a conversation between some 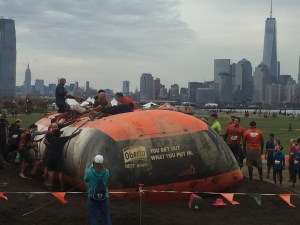 crew members, I learned that Park regulations prevented the crew from bringing in the heavy machinery and digging trenches and pits for a handful of obstacles.  The crew did the best they could to bring the mud to park with the million dollar views.  All of the usual obstacles that require excavating had been modified.  Funky Monkey was built above ground and the water was still there, this time in a manmade pool.  Crybaby and other obstacles such as Kiss the Mud were modified as well.  With Kiss the Mud, a tarp was first laid down, and mud was brought in and covered the tarp.  It didn’t seem to make much of a difference in this respect; mud is still mud!  Because of the park regulations, a few major obstacles were missing.  Both King of Swingers and Mud Mile were absent from Tough Mudder Tristate.  This left many disappointed as one mudder said, “It’s not Tough Mudder without Mud Mile.”  Looking at the course from just that point of view, it was a little disappointing to have a course minus a couple of the iconic obstacles.  The very flat course made for a quick run.  A lot of the running was on blacktop with maybe a mile or so going into some lightly tree covered areas.

This is a br 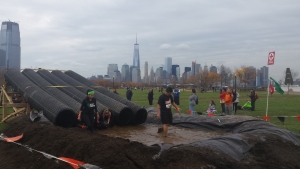 ief section.  There wasn’t much mud.  All of the mud Tough Mudder offered was brought in and spread out over heavy black tarps.  I was able to make the most of the experience and try and submerge myself in the few areas where mud was present.  Kiss the Mud, Prairie Dog, and Cry Baby were the only places you could get muddy!  For a first time Mudder, this would be a very bad representation of what a traditional Tough Mudder delivers.  Points have to be deducted for lack of mud!

The weather was unseasonably warm for early November.  Tough Mudder as usual, 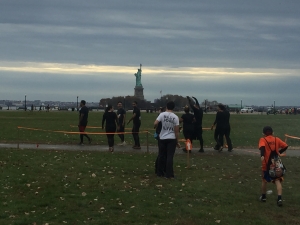 put on a well-organized event.  Volunteers were on the course helping with navigation of the park, and the Mudder Village seemed to have plenty of food and beer to offer up.  Olympic medalist Summer Sanders was on hand signing autographs at the mini mudder!  Finally, I would like to speak of the view.  Running along side of the Manhattan skyline and the Statue of Liberty was amazing!  For someone who does not make it to New York City often, this was just a jaw-dropping day all together.  To run along the water and see Ellis Island makes you appreciate the city and everything it stands for.  For the view alone, this Tough Mudder was a memorable one for me.

Score 3 out of 5 Muddy fingers