Op-Ed: The Pen is Mightier… Recently, I was peripherally involved in an article that helped open my eyes in a number of ways. It was an article that raised questions about safety at BattleFrog Series, a relative newcomer to the world of OCR with grand ambitions, who wants to position itself as one of the big players in the market space.

While the article was well-written, it lacked balance and perspective. Although it brought up some legitimate concerns, it failed to mention that all of the OCR companies have had safety issues at different times and venues. It didn't mention that Tough Mudder had an accidental drowning at one of its events and is currently involved in a major negligence lawsuit based on this incident. It failed to bring up multiple issues at Spartan Races that have included obstacles being removed due to unreasonably high injury rates or a recent death at one of their races that appears to be the result of an underlying heart condition.

Along with this lack of balance, the article also was very untimely, rehashing issues from races that took place months ago, many of which had already been addressed. Every growing business will make mistakes; successful companies own their mistakes, learn from them, and take measures to ensure they don't happen again. Given the release date of the article was only a few days before BattleFrog's first event of 2016, and their first event ever on the west coast, the article came across as an assassination piece, designed to cause damage.

And it has. The OCR community is still very small, and an article like this can make athletes and casual weekend warriors re-think their registration options, opting instead to stay with more established and better-known companies. It can also create bigger problems behind the scenes, making venue owners second-guess their willingness to host the race.

In other words, what we, as writers and bloggers put out there has a real cost.

Thanks to friends personally involved in this, I got to hear some of the actual backlash from this one; the added stress put on real people who were already under huge pressure to put on a high-quality event in a new market and set the stage for a successful year. The human cost of having to change plans at the last minute to put out fires that had been caused by the simple act of publishing a minor article with limited readership. It left a really bad taste in my mouth. 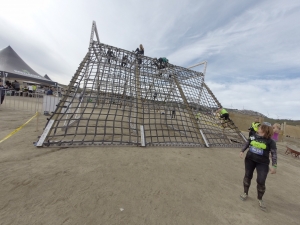 For the record, I spoke the day before their California debut with Ryan Atkins on the topic. As well as being an extraordinary racer, Ryan was recently hired by BattleFrog as a course designer and is the race director for the San Diego BattleFrog. Ryan assured me that the specific incidents mentioned; the collapse of a cargo net A-frame and a dangerous river crossing, had been addressed by BattleFrog staff some time ago, and that new SOP's had been created as a result. The cargo net structure at the San Diego venue was a hugely over-engineered steel frame structure. A short but cold water crossing at the San Diego race had three lifeguards on hand; two in wetsuits in the water and a third standing by on land. While certain hazards such as the possibility of landing badly after a wall or falling off monkey bars are part and parcel of the sport, safety is a huge concern for all the major race companies, and BattleFrog is no different in this regard.

“We are always striving for continuous improvement across the board with a zero defect mentality in every aspect of safety down to the customer experience in a porta potty”. Christopher Acord (aka Beard™), the Assistant Director of Race Operations at BattleFrog

I also took the time to speak with the lead of the contracted emergency staff and found that the number of medics assigned is dependent on the distance involved and the number of expected attendees. Smaller events will normally have around ten medics on hand, while larger ones might have 18-20, and will also have more vehicles to access remote areas of the course. The precise numbers and equipment brought are determined by the emergency services group themselves, not by the race companies.

As aspiring journalists, we walk a fine line. It is our duty to bring serious issues to light, and we can't and shouldn't sugar coat every race review, or they become meaningless. At the same time, we need to ensure that we're fair to the people whose livelihoods are on the line and that we present things in context and in a responsible manner. To do otherwise, we risk creating self-fulfilling prophecies of doom in an industry that we love.

0shares
Disclaimer: The viewpoints expressed by the authors do not necessarily reflect the opinions, viewpoints and official policies of Mud Run Guide LLC, or their staff. The comments posted on this Website are solely the opinions of the posters.
By Nomad|2016-01-27T11:32:58-05:00January 26th, 2016|Op-Ed|10 Comments