Spartan Race kicked off its 2016 season in Southern California last weekend with back to back races at Vail Lake in Temecula.  Immediately obvious on arriving at the venue was the distressing lack of water in the lake; with a drop of at least 10-15’ of depth since our last visit back in September, it was clear that the long California drought is far from over.  This also left exposed a vast mud plain that was once the lake bottom and would play a role in the race.

Saturday morning was crisp and sunny, and temperatures would rise from the low 40’s early in the day to somewhere around 70 degrees; it was a near perfect race day.  Once again, Spartan staff had designed a rugged course that made full use of the many hills available.  The course wound through the hills on the left side of the lake with obstacles that included early mud pits, the dunk wall and the slippery wall (as the only real water obstacle on the course), walls of varying height, and a fairly long but flat barbed wire crawl.  The course wound back into the festival area for the monkey bars before heading back into the hills for the sandbag carry, memory challenge, hurdles, and Atlas carry.  Up and over the hills one more time we went before coming down towards the lake again with the cargo A-frame and spear throw.

This was followed by a nice run along the beach with a slackline balance (in beta testing mode – there was no burpee penalty at this one) and the test for the memory obstacle, then we headed on a long arc through the mud plain mentioned earlier.  This was a shoe-stealer, and it paid to have a quick pace and a light step as we headed to the 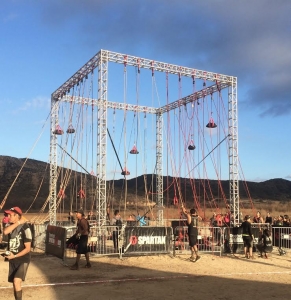 backside of the course where it diverged for the first time from the Sprint course.

The ~3.5 mile loop exclusive to the Super boasted the Stairway to Sparta, the Z-walls, and a few heavy elements including the plate drag, Tyrolean Traverse, and the Bucket Brigade, along with a couple more monster hills.  Although I’d been running pretty well up to this point, it was here that the wheels started to come off for my race; at ~6.5 miles in, my quads started cramping painfully, and the rest of my legs weren’t far behind.  A number of other runners were having similar difficulties at this point and there was much sharing of mustard and salt tabs to try to alleviate the suffering.  It was a shame, since the course now wound along flat paths through the trees that should have been very runable.  As I hobbled along, I knew my chances of faring well in the age group division had evaporated; now it was a battle just to finish.

Finally we came out of the woods for the final stretch of obstacles before the finish line (which were also looped back in for the Sprint); the rope climb, Herc Hoist, Multi-rig and fire jump.  This variation of the rig looked very doable; alternating rings and ropes leading to the bar sloping down to the bell.  Unfortunately, as I swung to grab the second ring, my hamstring froze solid and I dropped in pain.  The volunteer took pity on me and let me try again, and exactly the same thing happened.  I then stood at the end of the rig for a few minutes, waiting for my muscle to release so I could walk again.  Burpees were out of the question right then; I owed them and paid up later, but rest assured that I almost certainly stood there longer than it would normally take me to knock out 30.  Finally, I hobbled to the fire, stepped gingerly over it risking the loss of a little leg hair, and collected my medal; battered and humbled but not defeated.

Round 2 – The Hurricane Heat

A few hours later, after refueling and resting just long enough for the muscles to get really nice and sore, I was back at the venue for round two; Hurricane Heat – 078.  The temperature started dropping as the sun set, and I dressed in multiple layers as I had some idea of what was to come.  The HH had a big turnout; around 160 brave souls showed up, and we were quickly divided into 5 groups alphabetically.  There were 5 cadre present; Steffen Cook (Cookie) as the event mastermind, Kyoul Cha the evil little ninja as his second, and Cody Allen, Map Domiguez and Dingo Dominguez rounding out the panel of sadists.  The gear list included a sandbag which we quickly filled with sand from the beach and which would add spice to the PT exercises throughout the evening, and a towel… anyone who’s done prior events with Kyoul knows to dread the towel.  I have completed several hurricane heats at various Spartan Races; all are about building teamwork and cooperation through a variety of challenges along the way.  At one HH, we were zip-tied hand to foot and had to crawl through a drainage tunnel under a road; on another, we had to maneuver a massive tree trunk through part of the course.

This hurricane heat was different; although the teamwork component remained the same, each group was rotated through the five cadre who ran the groups through different training exercises, all of which were pretty intense.   I strongly suspect that this may represent a deliberate escalation of the endurance events on Spartan’s part that goes hand in hand with the new Spartan Delta, but only time will tell whether or not that’s the case.  This one felt more like a 4.5 h beatdown… particularly following a tough Super.  It was a grind, pure and simple, and I’m proud of my teammates and myself for pushing through it.

While Saturday was a typical sunny day in Southern California, Sunday could not have been more different.  A huge Pacific storm had rolled in, and dawn came to a steady drizzle that would later turn into very heavy rains and strong, gusting winds.  Getting up and driving back through the rain for the Sprint was a huge mental and physical test.  It would have been so much easier to sleep in; everything hurt.  Nevertheless, my wife and I braved the storm to take on day 2.  She was much fresher than I (having run easy during the Super and skipping the Hurricane Heat) and took pity on me, running and walking with me through the course to get it done.

We managed to get on the course early during a break in the weather, but once we got through the dunk wall remained wet throughout as the steady rain came back.  The weather made some obstacles like the inverted wall and a few of the steep climbs trickier, and others such as the monkey bars nearly impossible.  By the last mile, the rain was more or less horizontal and chill set in quickly.  The changing tent was never so welcome; it was a huge relief getting out of the rain and into warm and dry clothing.  We wisely left the venue shortly after finishing; as the day went on the weather got considerably worse, resulting in Spartan having to reroute the course around a particularly steep climb or two that had turned into a steady river of mud, and even having to cancel the last couple of afternoon heats as conditions continued to deteriorate.  Many were pulled from the race with hypothermia brought on by the wet and very windy weather.  The last obstacle of the race was that the parking lot turned to mud, and many cars required a tow (Spartan Race was quick to provide multiple trucks to help) to get out of the mire and back onto solid roads. 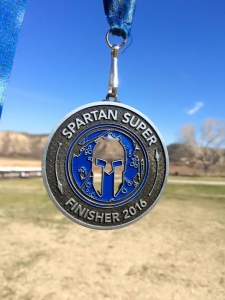 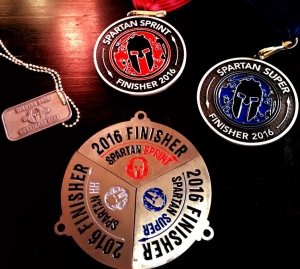 On the plus side, Spartan Race once again provided a great and challenging course at this venue that tested all the runners who showed up to race.  Their new medal designs featuring the cut-out spartan helmets are very cool, and this year’s finisher shirts are high quality and a great design.  On the negative side, other than the slackline balance they were playing with, there were no new obstacles; only the same ones we’ve seen before.  The SoCal race last year featured a large number of new obstacles to start off 2015 with a bang, and I know many had hoped for similar revelations this year.  While consistency is good, innovation keeps people excited to come back for more.  On this basis, I can’t help feeling a little disappointed, in spite of the fact that it was a great race and a solid start to the new Spartan season.

Ready for your own Spartan Race adventure? Use code MUDRUNGUIDE15 to save 15% OFF!