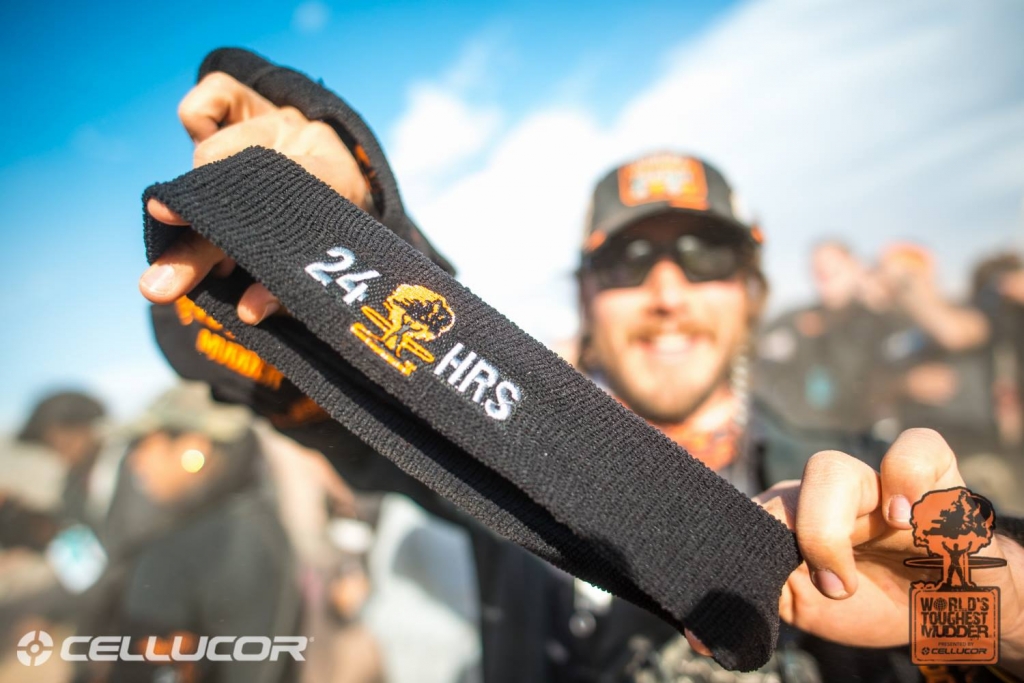 “Never talk about politics or religion in mixed company.” While that’s certainly sage advice, I think it needs a little freshening up, brought in line with the times as they say. Wouldn’t you agree? Great, I knew you would! The question is how? Hmm. I’ve got it! How about this…

And let’s take off our blinders and feel free to insert any of the “finisher” swag out there because it applies to more than the black headbands. Both on Facebook, and on the actual course, there has been no shortage of opinions on who is, and who is not, deserving of being adorned by these often-coveted symbols of accomplishment.

Some weeks ago, the World’s Toughest Mudder Community page on Facebook was home to quite the spirited debate on the worthiness of someone sporting a finisher headband if their race consisted mostly of time spent in the pit area either licking their proverbial wounds or simply socializing with their fellow racers. While I declined to comment in the thread, I did spend some time contemplating the matter, and ultimately arrived at an explanation for why this matters so much to some people. And, since there’s currently no one else sitting at this keyboard offering their thoughts, please allow me to bloviate…

When you look at a debate like this, there’s one group of stakeholders who tend to stay conspicuously quiet: the elites. Think for a moment, and then quickly jot down the name of the top five male and female OCR athletes that come to your mind. Be objective here. Don’t just name the first people you know of that compete. Stick with those that are truly elite – you know, the ones that are legitimate podium contenders every time they line up to race. When was the last time you noticed any of them engage in debates such as this? There may be exceptions, but generally speaking, they don’t. Admittedly, there are plenty of reasons for this, not the least of which is that paying sponsors don’t always approve of their athletes engaging in social discussions of this nature. However, I suspect that beyond that is the fact that these women and men know they’re good.

They don’t get worried about the medals, headbands, and t-shirts because they just don’t need to care that much about them. Standing on that podium is what matters most.

To the rest of us, however?

The average (or maybe even above-average) OCR participant wants, and in some cases, needs that symbol of validation. This is a sport that has grown rapidly in a very short period. Four years ago, if you logged into Facebook, and posted a pic of yourself crawling under barbed wire, scaling a muddy wall, throwing a spear, or hurdling a burning bale of hay, you were virtually guaranteed a flurry of “likes” and comments hailing your toughness and general awesomeness. It felt great, and there’s nothing wrong with that. This is intrinsic human nature stuff we’re talking about here people. The American psychologist Abraham Maslow famously wrote about what he called the Hierarchy of Human Needs in 1943, which explained the path that human motivation travels. The most basic needs are of course physiological – think “water,” “food,” “air” – but you know what else makes an appearance in the hierarchy? Esteem, which includes self-esteem. Translation: we need this sort of affirmation in our lives.

But those days are gone. The number of people who have done a “mud run” of some sort has grown exponentially, and the mystique surrounding the sport has faded. Your event pics may still get a gaggle of likes, but now a comment that contains a pic of your old 6th-grade school bus driver clinging for his life from a set of monkey bars over a pool of water is just as probable.

So, what’s an OCR athlete to do?

Well, the elites are covered. They’ve still got their podiums, sponsors, and (hopefully) cash prizes. But, the rest of us? Well, to go back to the example of World’s Toughest Mudder, we just substitute the orange headband with the black ones. In other words, we up the ante. “I’ll see your 5k mud run, and raise it with a 24-hour mud run!” Whew! That was a close one. Our awesomeness is once again intact, and we can hopefully move on to our pursuit of the final level of Maslow’s Hierarchy.

That’s why the black headbands matter for some people (notice I said “some,” certainly not “all”). And, it’s also the reason they get upset if someone dons one without “earning it.” They worry that such an act will dilute the meaning behind the trophy, and by extension, the perceived importance or impressiveness of what they have accomplished.

So, what can we do about this? Well, the reality is that we don’t have to do anything. Like I said earlier, there’s nothing inherently wrong with pursuing those endeavors that feed our need for “self-esteem” (remember, this need is embedded into our human DNA). But, as I considered this situation, I found that I was frantically searching my psyche for a way to resolve the controversy that seems to have engulfed this topic.

Suddenly, the voice in my head said, “Hey! Wake Up! You’ve already figured out a fix to this – remember the whole ‘Right to Marry’ thing?” Oh yeah. I kind of forgot about that.

For those of you who are not currently inside my head, I’ll explain (and if any of you are currently inside of my head, for the love of all things holy, please leave me alone or at least play nice with all the other voices already residing in here).

Remember that time that your Facebook newsfeed was littered with rainbow-colored profile pics? In what should forever be called the “Well, duh” moment of the year, the United States Supreme Court, in a 5-4 decision, declared that the Fourteenth Amendment granted same-sex couples the right to marry in all 50 States. And of course, social media melee ensued. For every rainbow, there also existed a rant or meme aimed at exposing the dangers of gay marriage, or condemning the Supreme Court’s actions as the final nail in the coffin of our nation’s moral compass.

While the ‘Right to Marry’ and ‘Black Headband’ controversies are certainly different (and obviously exist on polar opposite ends of the social importance spectrum), I find that I can reconcile them both (any many other disputed topics) through one simple question. Are you ready for it? Okay, here goes…

Notice, I didn’t say, “Does this upset me?” or “Do I agree with this?” I simply look at the issue at hand and try to objectively decide if it has any bearing on my life whatsoever. If the answer is ‘No’, then why should I get so concerned about what others are doing?

Think about it. Why would I care if two men who love each other want to get married? Does it affect my marriage? Are my wife and I any less married now that two women can get hitched? Of course not. It’s been months since the Supreme Court’s ruling, and frankly my life doesn’t feel any different. Why would it?

Similarly, as I sit here in Illinois, if someone in Kentucky is wearing his black headband at the gym, but he only did two laps in Las Vegas, am I somehow affected? Nope. When I hit a “wall” on my next long run, am I going to say to myself, “Why am I doing this? Anyone can get a black headband. Should just throw in the towel?” Hell no! When I walked into work this morning, did someone come up to me and say, “You know, I used to think you were awesome for earning that black headband at World’s Toughest Mudder – I almost named my firstborn after you, even though she’s a girl and would hate me forever for naming her Matthew. But then I met another guy who has one, and he only completed one lap before hanging out in the pits for 18 hours, and then walking the second lap. I’m sorry, but you’re no longer awesome to me”? Of course not (and frankly, an exchange like that would seriously creep me out). So, take solace in knowing that another person’s accomplishments, whatever the circumstances surrounding them, do nothing to diminish your own.

But if at the end of the day, you decide that the rules which govern how a particular race’s finisher hardware is earned aren’t stringent or elite enough for you, then the solution is simple: don’t earn one. Find something else that satisfactorily meets your “esteem” needs. But, please don’t chastise others for reaching their own personally defined goals, in whatever manner they see fit.

*Author’s Note: For full effect, I ask that when you read this line, please imagine the voice of DJ Jazzy Jeff at the beginning of he and the Fresh Prince’s 1991 hit single “Summertime”. This is especially important if you happen to be reading this article on a #TBT. And…if you happen to be too young to remember that song, then I highly recommend you check it out. However, you need to know that the Fresh Prince now prefers to no go by the name Will Smith, for reasons that are entirely beyond my comprehension.

**Another Author’s Note (because I’m the one writing this, so I’ll do what I want to do…na-na-na-na-na!): I do feel the need to warn you that adopting the practice of asking this question may result in a marked decrease of drama in your life. So, you know, if you thrive off that sort of thing, you might want to ignore this advice altogether.

0shares
Disclaimer: The viewpoints expressed by the authors do not necessarily reflect the opinions, viewpoints and official policies of Mud Run Guide LLC, or their staff. The comments posted on this Website are solely the opinions of the posters.
By Matt Walker|2016-05-11T09:51:40-04:00May 11th, 2016|Op-Ed|2 Comments