“This is going to be a short day…”

Said Dominic “PlatinumRig Dom” Maurice the founder of Platinum Rig as we left his house, outside of Montreal, Canada, at 7 am to head to the Platinum Rig headquarters for what would turn into a thirteen plus hour workday. Over the next few days, this statement would prove to be true. Since it's beginnings in 2011 Platinum Rig quickly made a name for itself in the obstacle racing world, and has been non-stop for its founder.  For five days I got to live and work alongside Dom.

With Platinum Rigs at over 140 obstacle races this year in over ten countries it isn't stretch to say Platinum Rig has become one of the most iconic obstacles in the industry and revolutionized obstacle racing at least in North America. 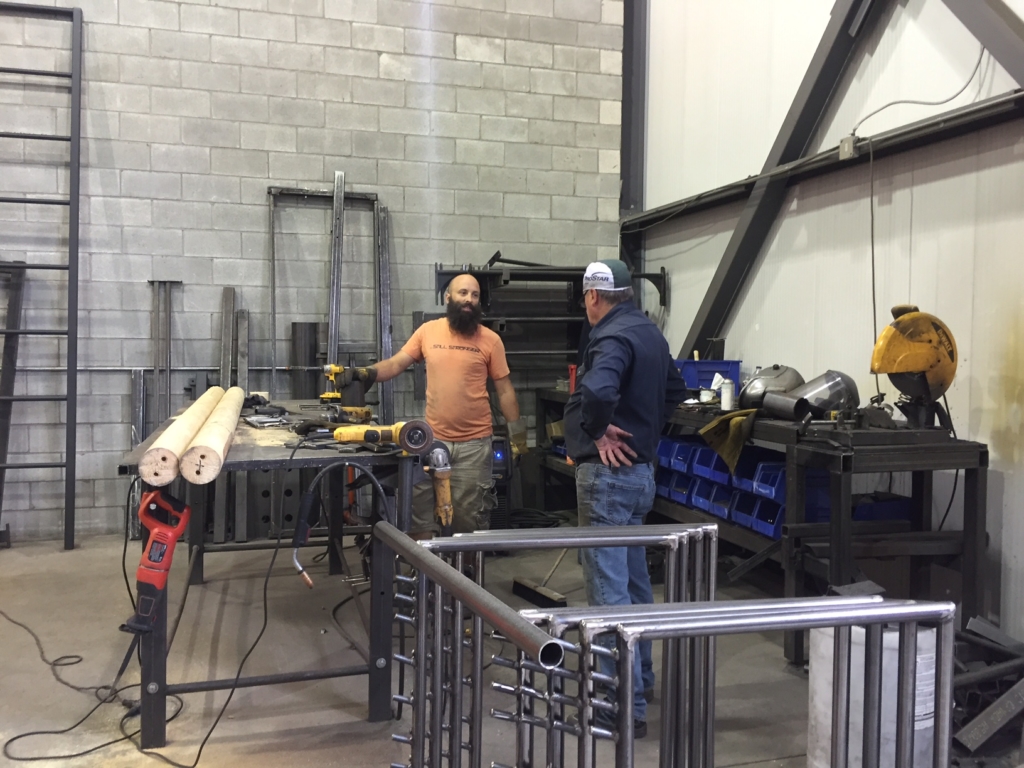 Dom and Rene discuss a new project in the shop

After a short drive we pulled up to the Platinum Rig headquarters, a nondescript building in an industrial park in Terrebonne outside of Montreal, our day would begin. After walking through the showroom, we entered the main work area. We would be greeted by Rene singing as he welded away in a corner and Alex the most recent hire tidying up after the previous weekend's events. For a company, many in the OCR community has come to grow and love or love to hate the warehouse, pardon the term, was spartan, devoid of frills, instead used for work and work alone. 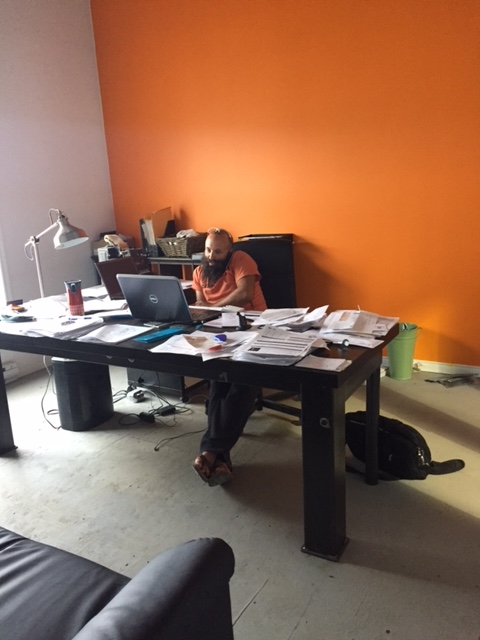 Dom led me up to the office area where he would answer a few calls and send a few emails before heading out to the latest install. Unlike many corporate headquarters his office is sparse, other than stacks of orders it is not the typical CEO corner office. One lone couch against the wall, a desk, and an office chair adorn his office. When asked later about his sparse office he said since moving into this space about a year ago they simply haven't had the time to decorate. Soon I would better understand this statement.

As we loaded the box truck at the office and headed off to the latest install of a huge rig at the Laval Fire Academy, Dom opened up about the beginnings of the company. It all started in 2011 when a now ex-girlfriend wanted a rig to train on. Dom, at the time a train engineer with a hankering for building hot rod cars, looked at existing rigs on the market and knew he could do better. With some experience in welding, he made the first rig then set it up at a friend and former professional hockey players house to take photos. Dom said first they took photos of the house in the background, then changed the rig and took another set of photos with the lake behind the house in the background and Platinum Rig was born… but that wasn't the original name. 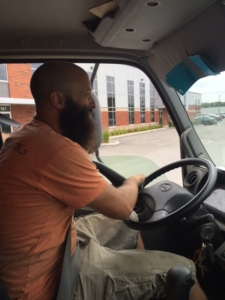 As I sit in the truck a phone call comes in over the speakers, in French, a few minutes later Dom hangs up and says “that was a new order”. Two more custom Platinum Rigs will be heading to locations in France and Canada. This pattern would repeat itself throughout my entire trip.

Dom continues his story saying they first named the company Premium Rig and then changed it later to Platinum Rig. After the first photo shoot, Dom had 8,500 fliers made up for the new venture and headed to the Tremblant Spartan Race 2011 and papered all of the vehicles.

On Monday after the race, orders started to flow in for Rigs and the company has never looked back.  From CrossFit gyms around the area including Laval CrossFit, one of the top boxes in Canada to private backyard Rigs Dom does it all. From this those 8,500 fliers Dom would begin a relationship with the Spartan Race Canada owners, and Platinum Rig made it's debut at a Spartan Race Canada in early 2013. Quickly becoming a staple in less than two years in the obstacle racing world. He finishes the story as we pull into the Fire Academy, and it's back to work. 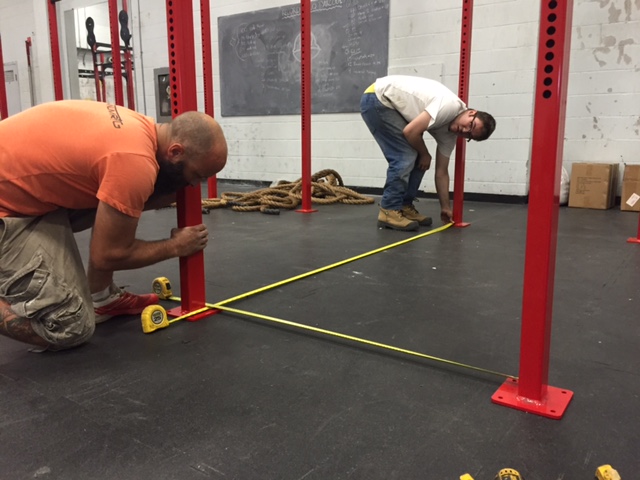 Dom and his assistant Alex unload all the tools and quickly get to work prepping the floor for the install. Dom was checking each measurement to ensure the rig is not only built strong but installed correctly. He personally is at every install.  We cut the squares in the mat for the base and then leave Alex to finish drilling the holes in the concrete before securing the rig. Then back into the box truck to pick up various equipment, parts, and supplies around the area. All the materials for the Platinum Rigs come from within 40 minutes from the warehouse with some being as close as one building over. 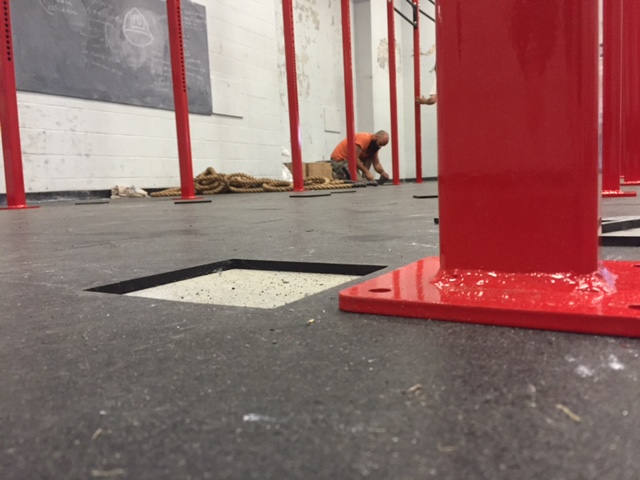 Install Continues. All welds are 365-degree for greater strength.

Around 12:30, we stop and catch a quick bite at an Indian restaurant near a supplier. Dom tells me more about the company, which employs about 4-6 people at any time depending on demand. While most in the OCR world are familiar with the Platinum Rigs seen on race day, that is only the tip of the iceberg for what they do. 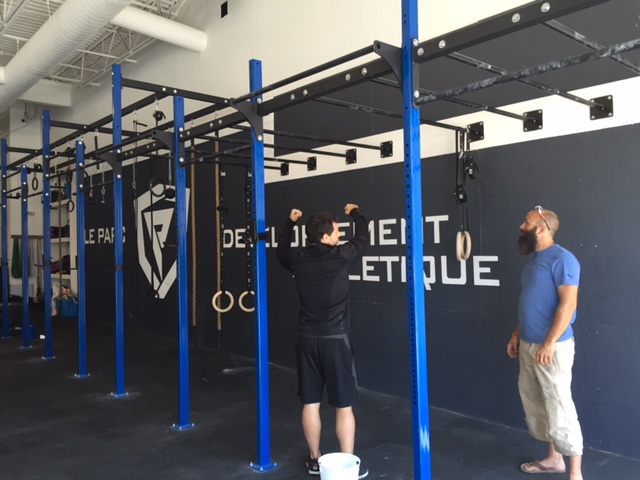 Since founding the company in 2011, Dom has installed Platinum Rigs in CrossFit Boxes, Functional Fitness gyms, MMA training facilities, Aerial yoga studios, large 6,000 member mega gyms, schools, parks, fire academies (as we happen to be doing that day), fire stations, corporate office gyms, backyards for personal use, even installing a rig outside of Palm Beach, Florida once for the owner’s personal use the list goes on and on. Platinum Rig can turn an empty warehouse into a fully functioning gym well beyond just the rig itself offering all the additional equipment needed including, weights, bikes, rowers, turf, and flooring. You give Dom space, and he can create the gym of your dreams. No two Platinum Rig’s are alike as each one is built to the specs of the individual or company ordering them. This has included a Platinum Rig bunk bed and other specialty projects. 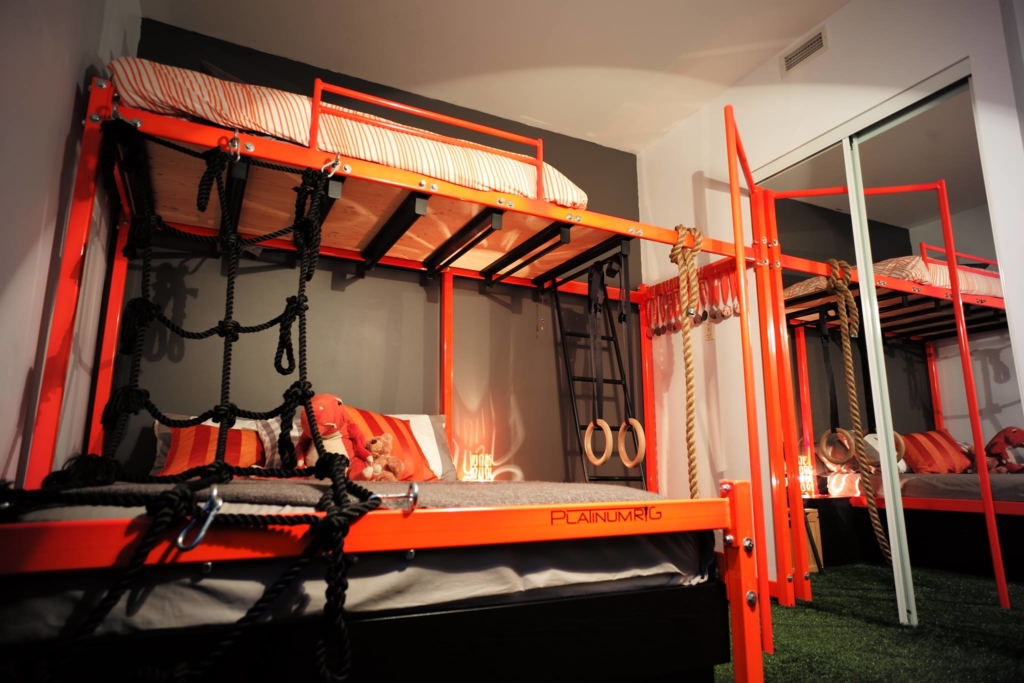 Dom went on to tell me what separates his product from much of the competition are the 365-degree welds they do around all the pieces of the rig, whereas some of his competitors use a spot welding technique. A strength I would see as we visited various rig locations during my trip. 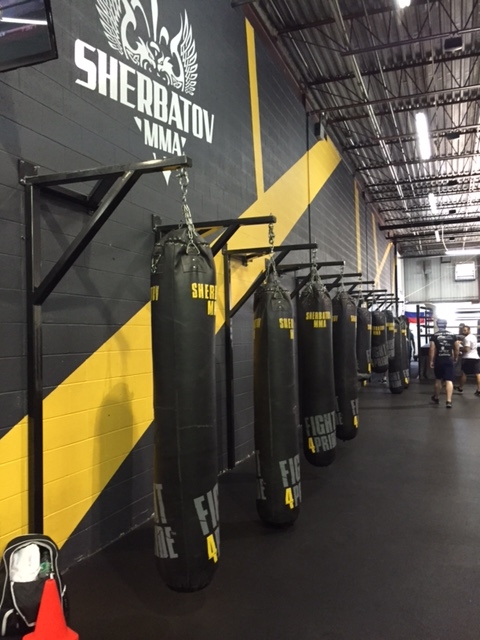 Platinum Rig is more than Just Rigs. Custom designing all sorts of gym equipment including this MMA gym's equipment.

In addition to sales, Platinum Rig’s are also available for rental for events. Later that weekend as we set up rigs at both a BattleFrog Series race and a Strongman competition the diversity of the company become apparent. 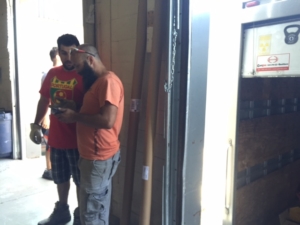 After finishing lunch, we headed to a local gym equipment supplier to pick up plates for the strongman competition as mentioned earlier. The striking thing about Dom is even as busy as he is he always took the time to talk with each supplier offering a joke and a few minutes of his precious time. That day the topic would be soccer and the European Championships. At every stop, a laugh, joke, smile and story accompanied the pickup, sometimes at this author’s expense being an English speaker among a sea of French Canadians.  It became clear that Dom not only cares about the product he produces but the relationships built on each order. 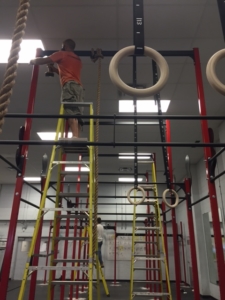 Back to the Fire Academy…

As we loaded the truck after about a half dozen stops and headed back to finish the install at the fire academy, it became clear that Platinum Rig is more than a business to Dom. It truly is his passion in life, and he wants to offer the best of himself and his product to those around him.

It was around 4:00 pm when we arrived back at the Fire Academy. Here we met Alex, who was finishing up drilling the holes and added the last nuts, bolts, and screws into the Rig before attaching the ropes and rings. It was well after 7 pm when we loaded up and left the fire academy to head back to the warehouse. Twelve hours from when we started the day.

Alex headed home upon reaching the shop. Rene and his singing had left for the day. It was Dom alone at his desk still finishing up paperwork for the day as the twentieth or so call came in, and yet another order. It would be nearly 9 pm before we left the shop. 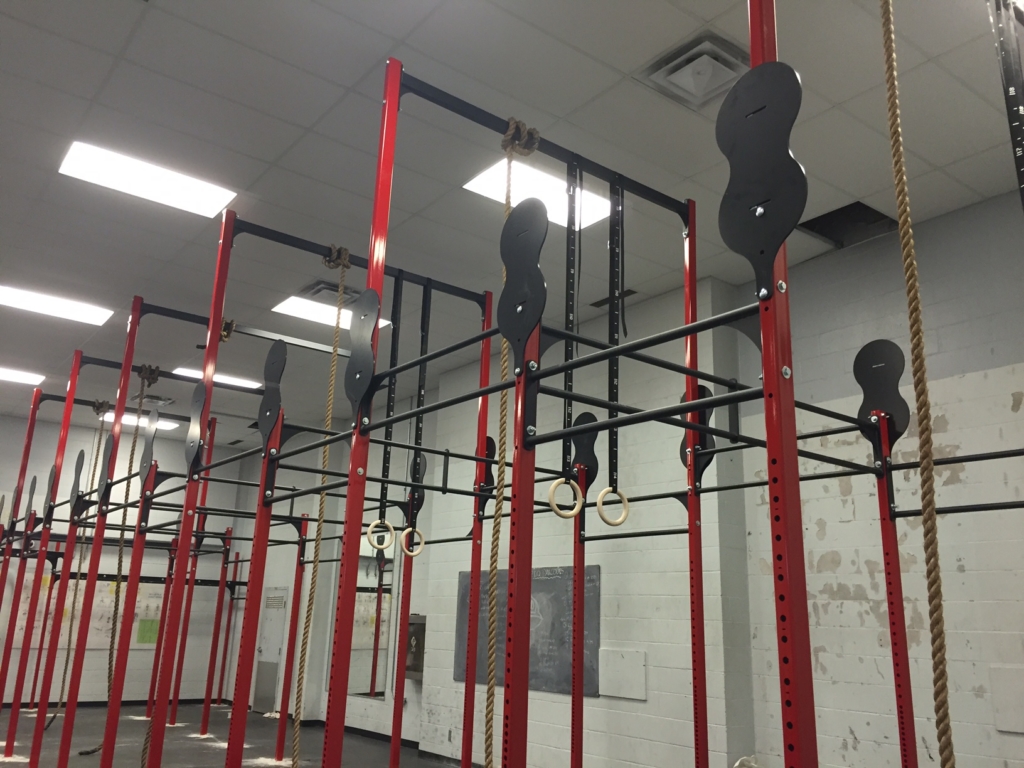 As we locked up and left Dom said, “Just another short day at Platinum Rig…” without a hint of irony in his voice and a smile. For the rest of the trip, we would continue on days like this setting up two events for the weekend on Friday, encouraging people at the Rig all day at BattleFrog Series event on Saturday and then on Sunday tearing down the weekend’s events. All in a day’s work. 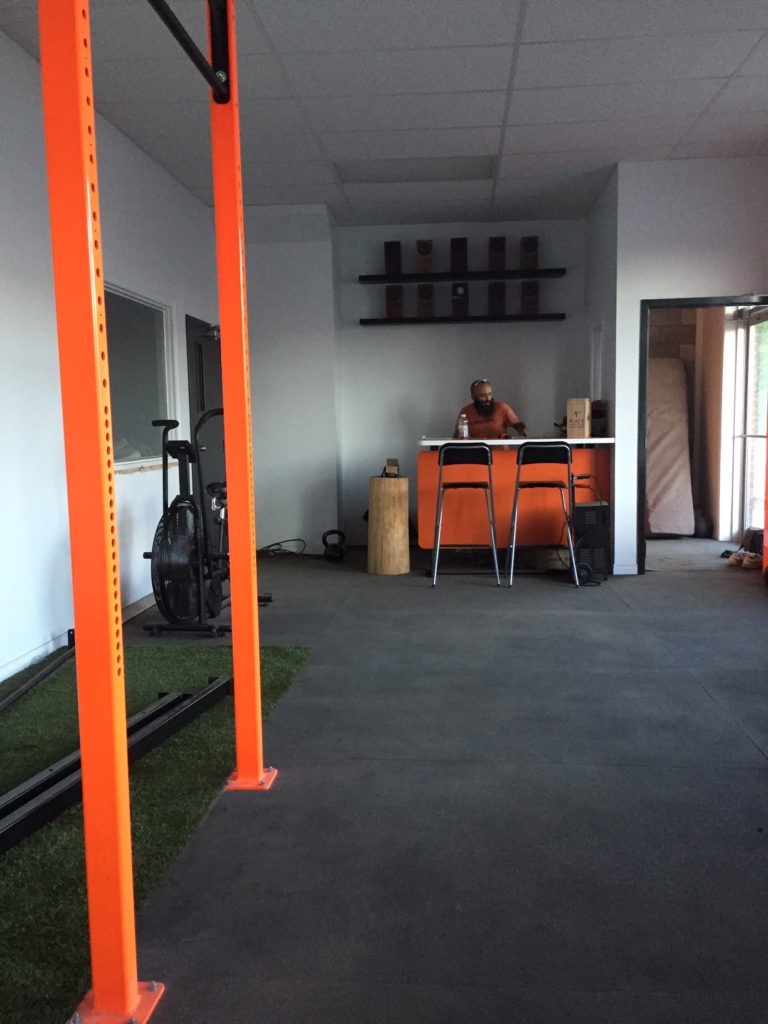 Final Phone Calls in the Showroom.