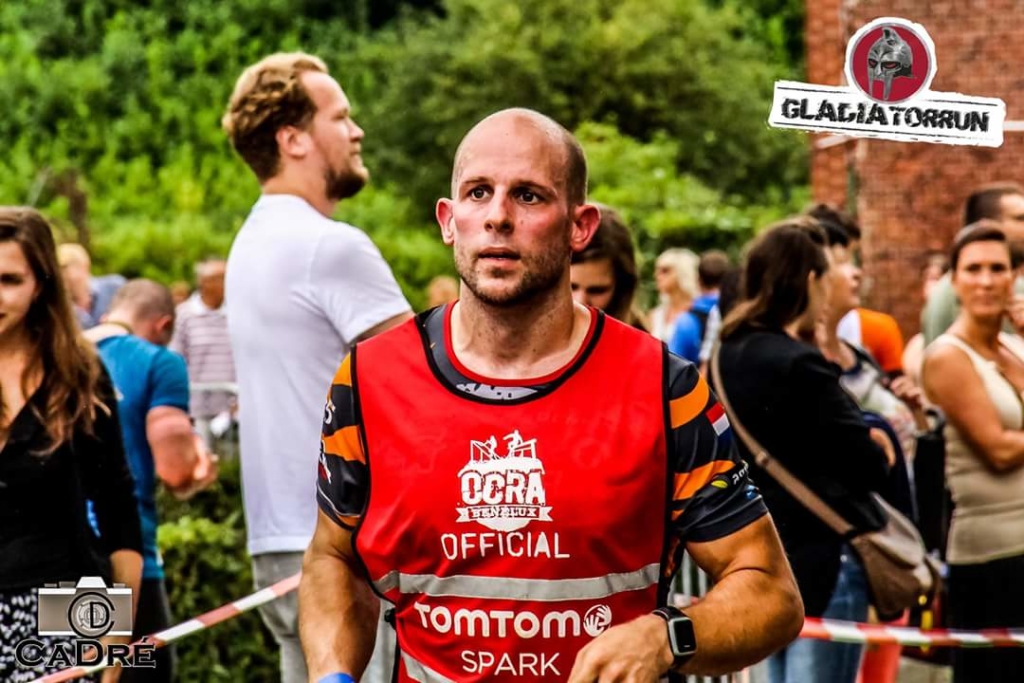 Yesterday, I did something that was new to me. Sunday, September 11th was the Gladiator Run Combat edition, 11km, in Diest, Belgium. The event featured a competition wave which was monitored by the Ocra Benelux. This competition wave also has a sweeper and I had the privilege to be that sweeper! The event took place at the Citadel, built in the mid-1800’s, with an almost medieval look combined with the looks of a first world war bunker.

Upon arrival we caught up with the rest of the officials and started to prepare for the competition wave. The other officials got assigned to their posts. The course looked awesome, almost completely taking place on the citadel grounds. I geared up and waited for the competition wave to fill the starting area.
My task was clear. The sweeper is the last one in the competition. Everybody that gets overtaken by the sweeper loses his or her wristband. I wasn’t supposed to run competition speed of course. Just a slow pace and including all obstacles (duh)..

As the starting area started to fill I made my way to the back of the wave. The wave was filled with a lot of Belgium’s Finest obstacle runners from OCR Belgium and a lot more familiar faces. The wave hadn’t started yet, but I was already taking wristbands. Two girls, dressed up as birds, accidentally booked the competition wave. Since they were going to need help on practically all obstacles (which isn’t allowed in the competition wave), they immediately handed over the wristbands. Two other runners saw them do this and admitted they also signed up for the competition wave without knowing the consequences. 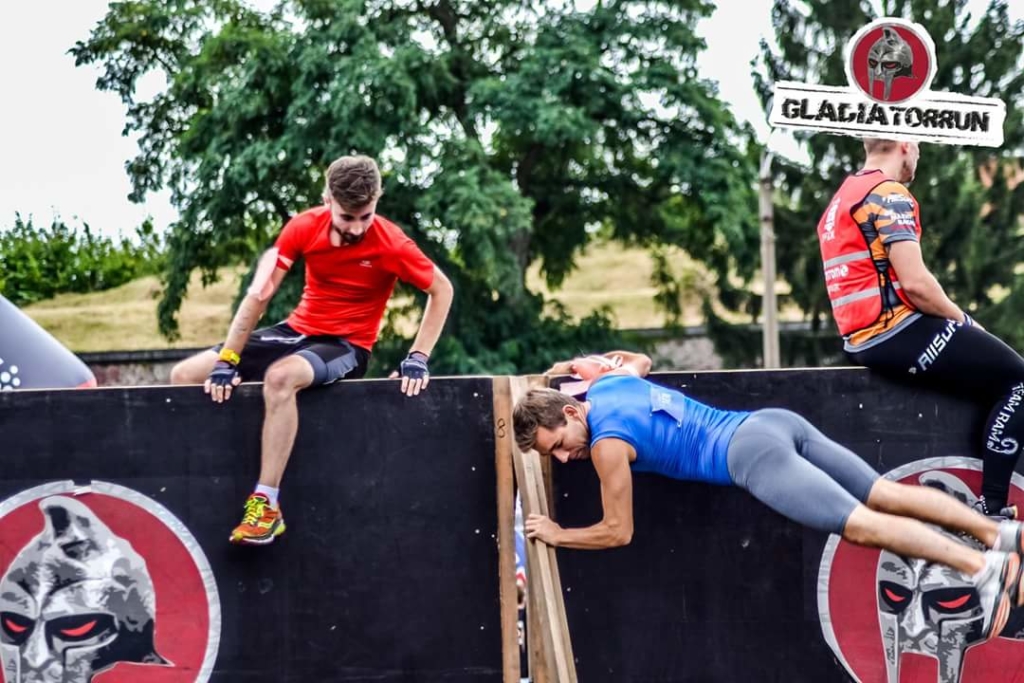 After the starting signal the competitors raced towards the first wall. Barely running I followed, making sure I was the last one (by far) arriving at the wall. The wall proved to be too high for both of the dressed up girls, so as expected I had to give them a bump up the wall. I then ran up the wall, sat myself down onto it to wait for some of the contestants struggling to get over. Unfortunately one was not able to pull herself onto the wall. It was quite thick, so she couldn't pull herself up high enough to get her foot onto the wall. The first band was taken.

I decided to move on, since all the competitors had passed. It didn’t take long for me to catch up to the birds. Stayed behind them for a bit, but overtook them eventually. Then I got startled a bit. One of the elite runners came limping towards me. He actually sprung his ankle on the wall and decided not to continue the race. I moved on. Keeping my average speed around 6kmph. It wasn’t long before I saw the first actual competitor and almost immediately regretted being the sweeper. It was a friend from another OCR team. What was she doing running at the back? I could see she was struggling. I decided to stay with her, try to boost her spirit and pace her a bit. All though the terrain was fairly rough (lots of steep hills, narrow paths through the bushings), she had a very hard time keeping her pace up. I felt so sorry for her, knowing this wasn’t anything like her. She explained having been ill the week prior. But wanted to try to keep going. So we did. The obstacles went ok, the running slow but steady. Until around 2km into the race. We were jogging on a flat area when she noticed her heartrate was still through the roof. Now I was struggling with the decision to pull her out before she could harm herself. I kept asking her how she was doing. I did not want to take that wristband! 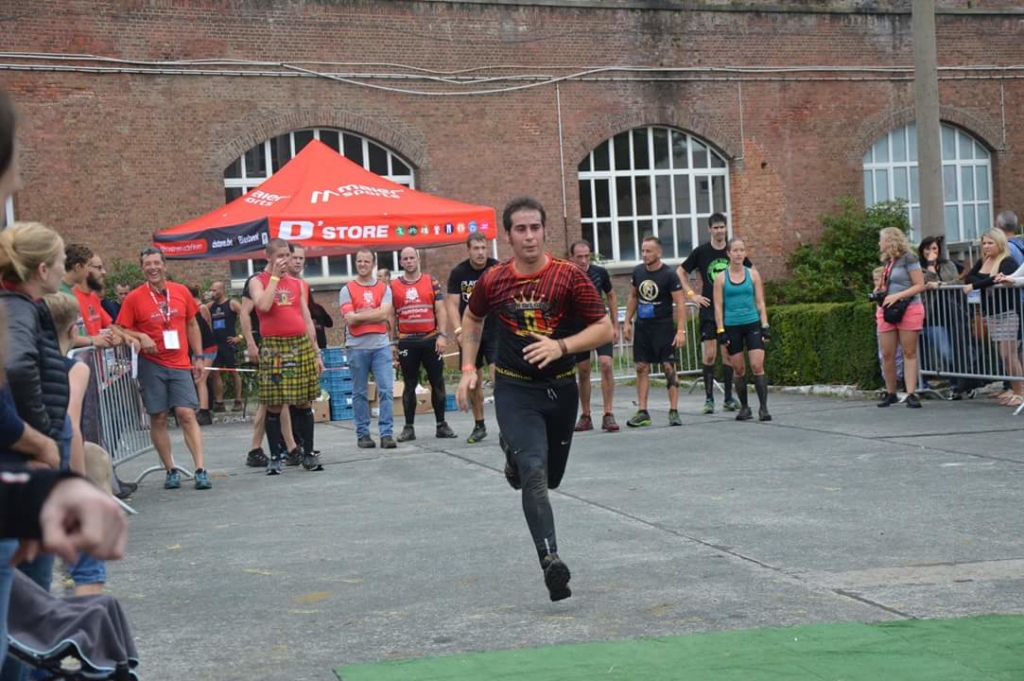 Not long after she decided to pull out herself. Handed me over her wristband and walked back towards the starting area. Ok, focus, move on. I decided to pick up the pace a bit. I was overtaken by a lot of people from the second wave already and lost a lot of time and speed on the first few kilometres. Didn’t take long for me to get the average of 6kmph back on the watch. Still no competition runners. The course went through the citadel and the grounds around it, swirling through the rough terrain with some nice obstacles. After a few kilometres I ran into a fairly large group of competition runners stranded at an obstacle. The obstacle where a bunch of horizontal beams, first one around 2 meters from the ground, on which you had to pull yourself to the top without the use of your legs or feet. I decided to wait out the group, give them the chance to conquer the obstacle before trying it myself. Unfortunately most of them lost their wristband on the obstacle. Moving on. Steady pace again, since I obviously arrived in the tail of the competition wave. I tried to make sure I stayed well behind the actual competition runners. I didn't want to take the wristband from somebody by overtaking them. I know I was the sweeper, but all I was looking at was whether they could keep running. I started to enjoy the run rather than focus on the other runners. I had fun, only had to take three wristbands, one from a French man that was having the time of his life and had no idea he was running in the competition wave and two from guys that simply couldn’t keep running.

The rest of the course was a blast. I made my way past runners that already lost their wristbands and for the remaining third of the race decided to maintain running behind the last runners with bands. So whenever they lost their bands at an obstacle would be my go to pass them. 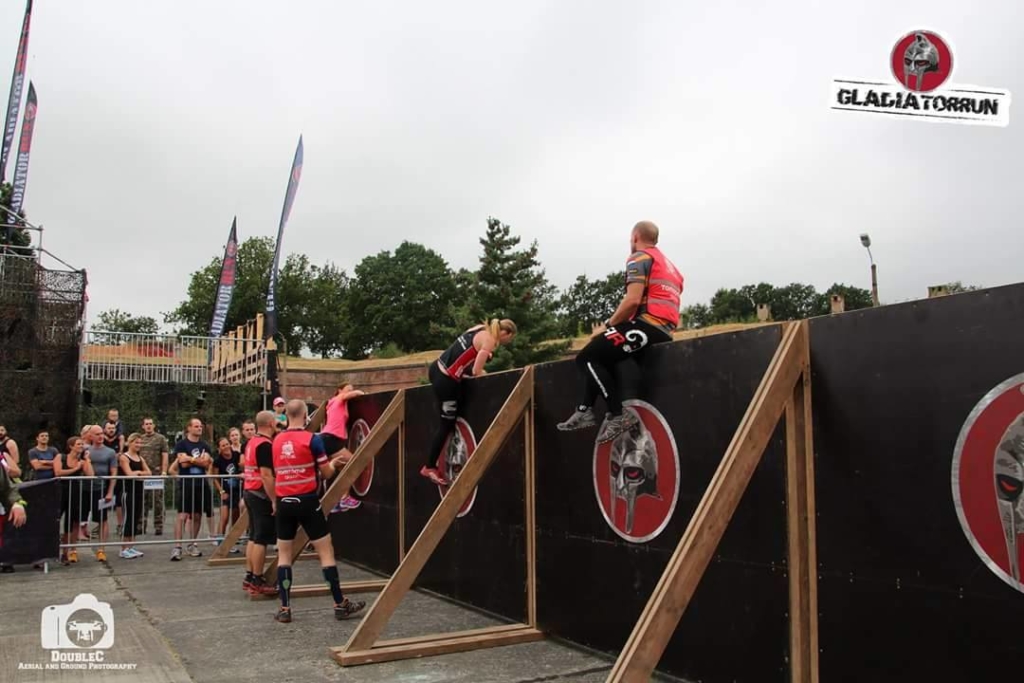 I got a lot of positive reactions, being a pacer for the last couple competitors, shouting them forward! I had no intention to take any wristbands on the last few kilometres of the race. The final two obstacles (the ramp and the water slide) where an awesome ending to a short, slow but fun race!

The atmosphere amongst the runners, the volunteers and the officials was fantastic. I had such a blast running the course. As I understood this could’ve been the last Gladiator run at this location, which is a shame! I’m glad I still got to run it. This was my very first Gladiator run and I must say I was actually impressed by the organisation!

I’m fairly sure this won’t be the last time I’ll be sweeping!