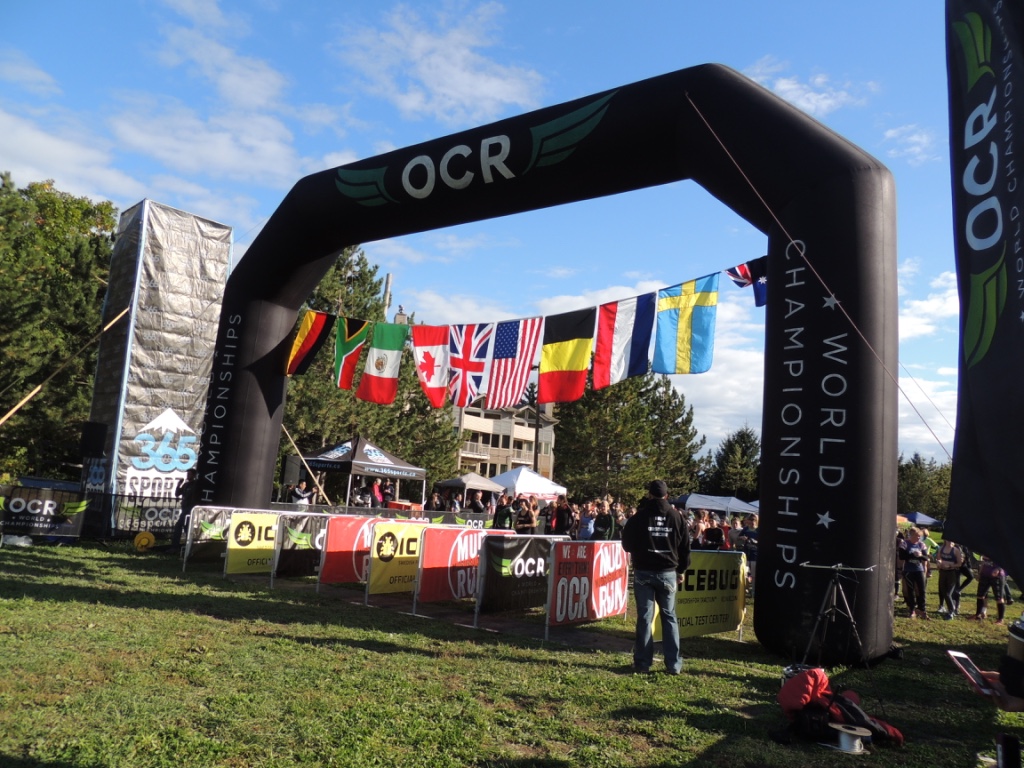 A crazy dream of Adrian Bijanada, many people laughed when he stated back in 2013 that he was going to launch an independent world championship.  A standalone event that didn't derive from any particular race series, at a time when Spartan Race was having its own World Championship and World's Toughest Mudder was moving to Vegas.  Then in 2014, he pulled it off.  A truly international event with strict qualifying requirements and an atmosphere that no-one in our sport had felt before.

In 2015, he did it again, roughly doubling attendance from that first humble event.  He brought in many other races with #OCRUnited, and had them display signature obstacles on a 15k course that was ridiculously obstacle dense and challenging.  OCRWC also boasted mandatory obstacle completion, ensuring that the winning athletes were those able to complete all of the obstacles as intended in the shortest time.

There were some big questions this year as he moved the event from Ohio to Ontario, Canada, making it truly a World Championships in yet another way.  While before the race took place at the home of Mud, Guts, and Glory, and made use of their obstacles, this year they would have a totally blank canvas to work with.

This past weekend, those questions were answered, as athletes descended on the sleepy town of Collingwood to decide who were the best in the world.

The venue was gorgeous; moderate ski slopes festooned with brilliantly colored fall foliage, overlooking Georgian Bay.  Centered on an active ski village, athletes have ample choices for food and beverages onsite, as well as multiple options for accommodations and free parking.  Spectators were also free, and “team support” had free access to the gondola which whisked all to the top of the mountain to better view the action.

The lack of set-in-place obstacles this year provided more room for other races to contribute, and they stepped up in spades, providing a final count for the main event of 48 obstacles across 15k.

Friday was the appetizer, a great way to get out there and whet our appetites for the main course on Saturday.  The short course is a new event this year and was a very fast 3k with 15 obstacles. 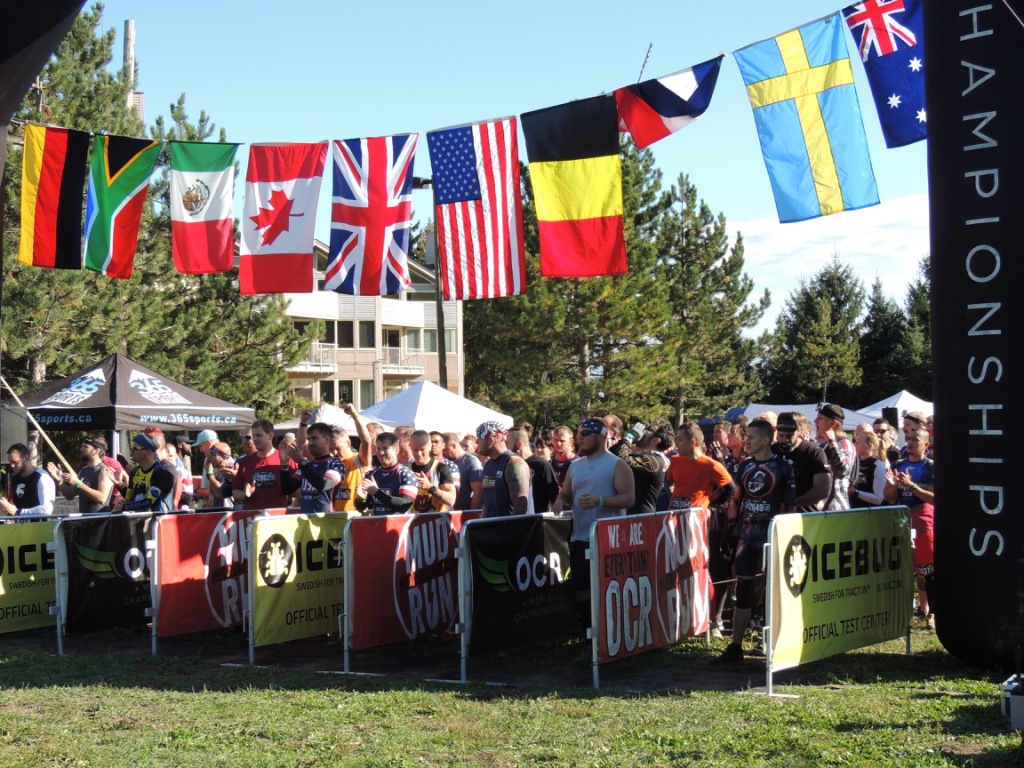 Competitors were sent out in a rolling start, with either 8 or 16 athletes  set loose upon the course at one time. Unlike 99% of races, the earliest starts here were not reserved for the elite racers going for the big money; instead, the Men's Master's Division started things off in the early morning.  Then Women's Masters, Men's Competitive, Women's Competitive, and Journeyman/Journeywoman divisions followed, all of them taking the course before the Pro Competitors finally got their chance.  This served a couple of purposes. First, some folks have grumbled for years that the races get harder as the day goes on, and the obstacles get muddy and slippery. Second, when the best in the world did take the field, they had a substantial crowd watching and cheering them along. 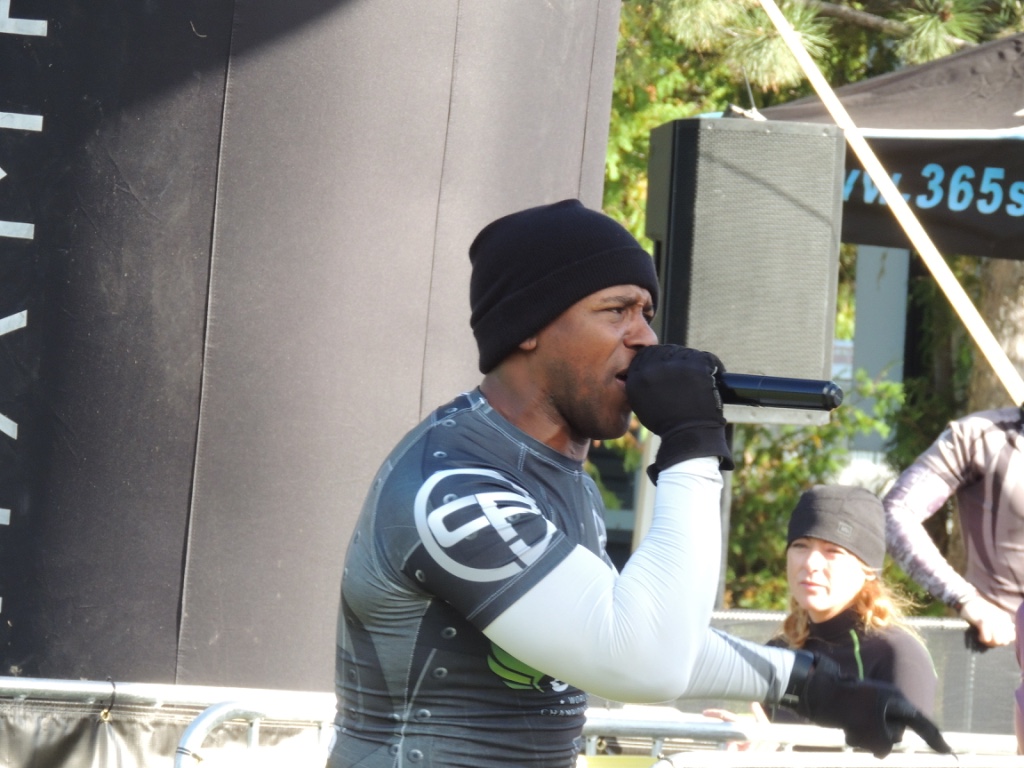 Once athletes in the start corral were briefed about the rules by Brad Kloha, and warmed up by a quick motivational speech by Coach Pain, they took off from the starting line up a mild incline and soon hit the first obstacles.  Past some simple hurdles and a version of American Ninja Warrior's Quintuple Steps (made easier by athletes being able to use their hands as well as feet to bridge the gap), they'd arrive at their first real challenge, and it would be a mental one: Dragon's Back by Toughest.  My advice for this one?  Trust yourself, breathe, and go.  If you overthink it, you can waste a LOT of time here. 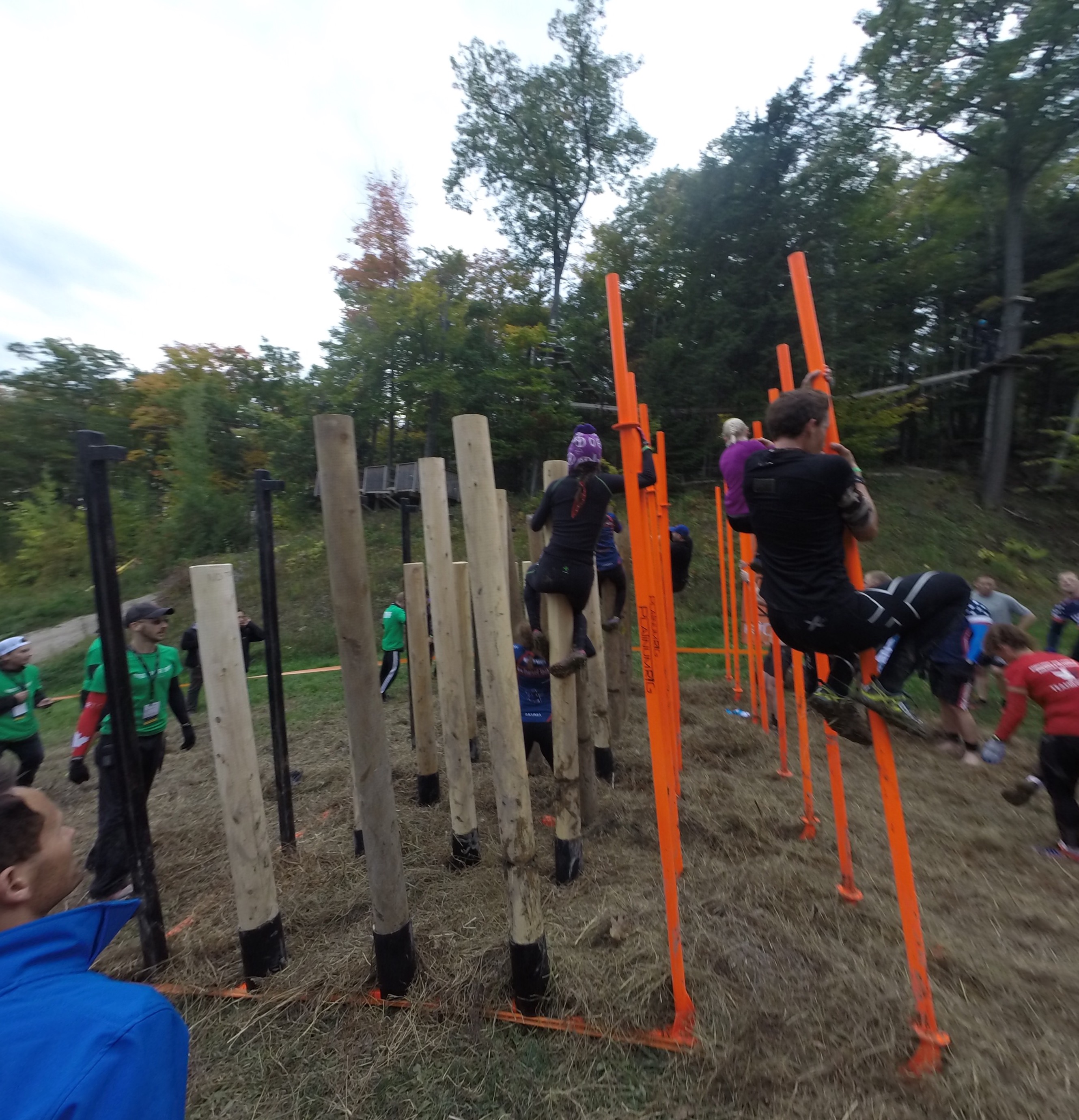 Climb a fairly muddy hill, then turn and arrive at the first major band-cutter today – Platinum Rig's Samurai.  This obstacle was completely new to me, and consisted of two metal vertical poles, followed by three wider wooden poles, then another metal one.  The goal was to traverse the poles without touching the ground, supports, or the top of the poles.  Being a member of the Weeple Army helped me here, as I've had enough practice giving full body hugs to be able to get through this one fairly easily.

After that, it was back down the hill to a “standard” Platinum Rig featuring a variety of rings, bars, and ropes.  This was in a prime spectator viewing area and boasted a long line in the repeat lane for those who failed on their first try. 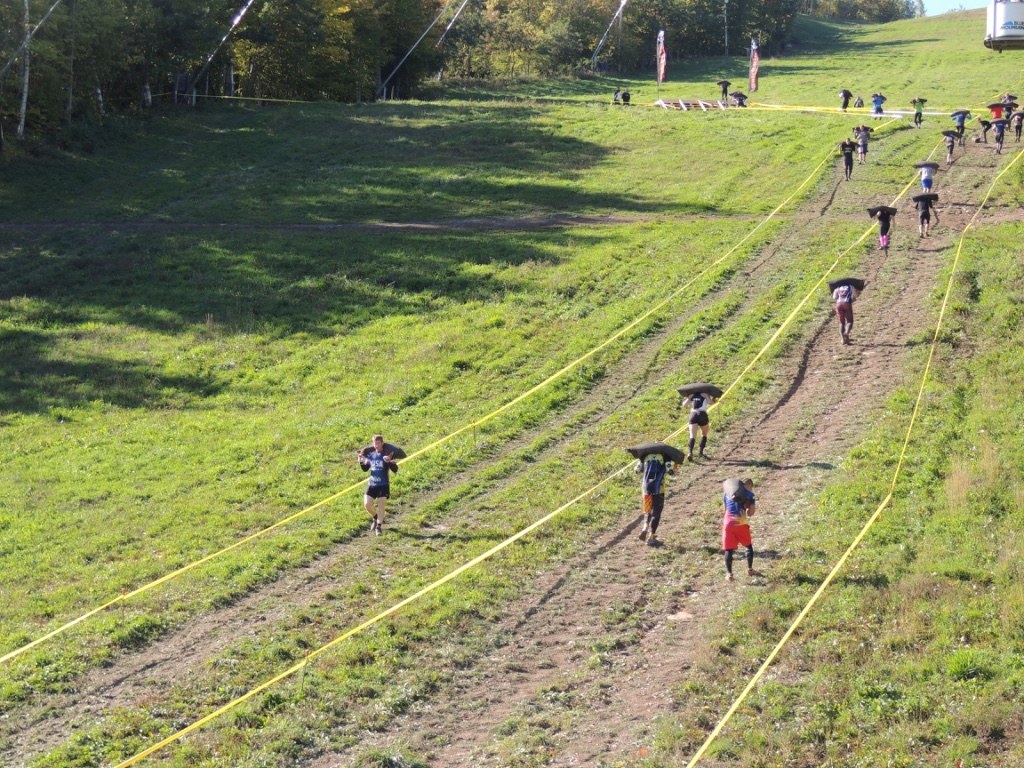 A short run from here lead to the Wreck Bag carry – 50 lbs straight up and back down the ski slope.  The good news for today is tomorrow's bad news; the turn-around point today was only halfway up the mountain (while the ominous yellow tape continued past this to the top). 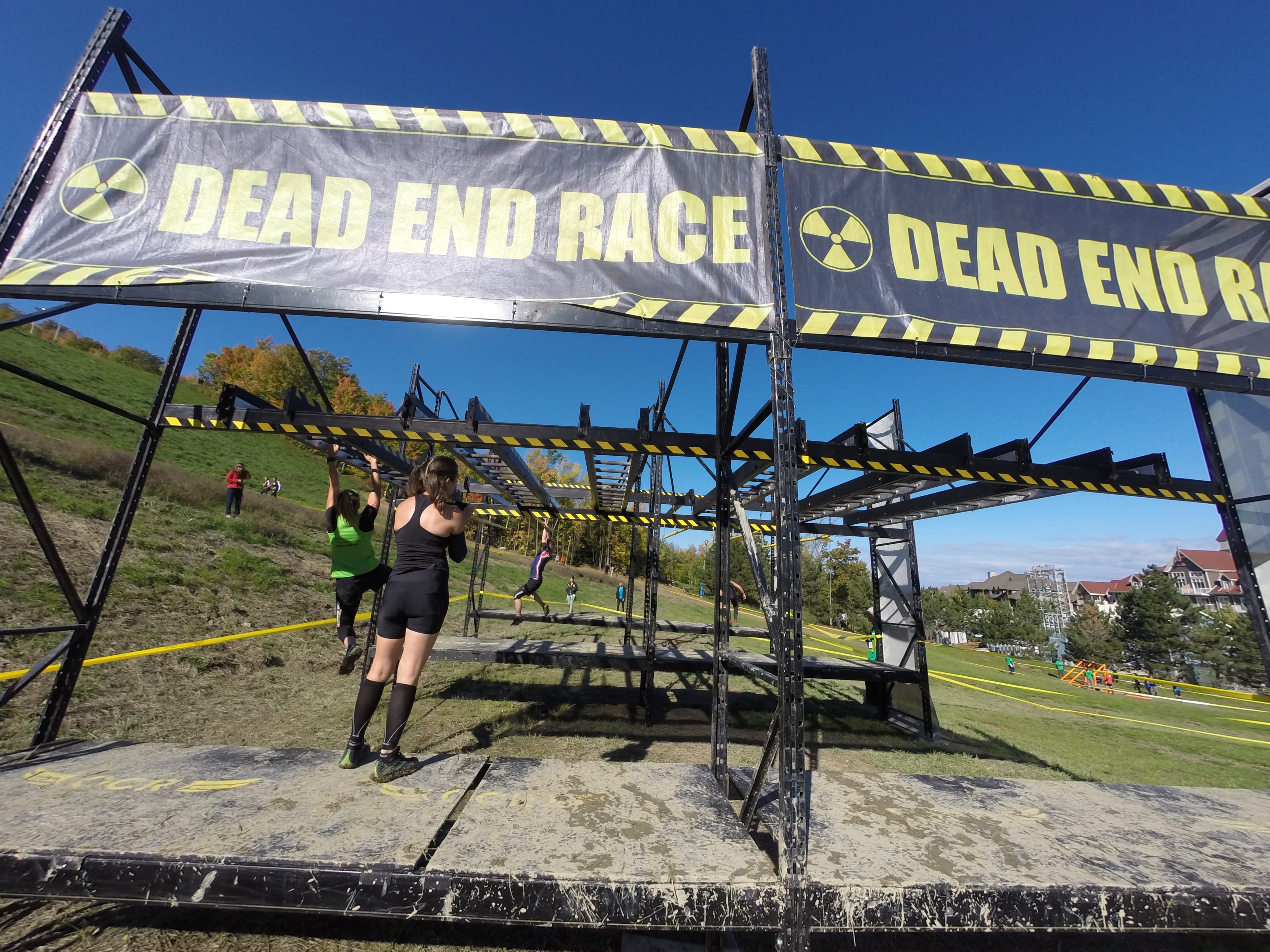 Another somewhat level loop went over an 8′ wall to Monkey Bars from Dead End Race – set fairly high above a muddy mess, these consisted of a thin ladder-like set of monkey bars followed by a pipe traverse.  The next one in line was a set of floating traverse walls that was probably my favorite obstacle of the day in spite of the fact that halfway through one of the rock-climbing holds rotated as I put weight on it, dumping me unceremoniously to the ground.  In seconds, a staff member was climbing up like a monkey to re-secure the hold as I made a second (successful) attempt on another lane. 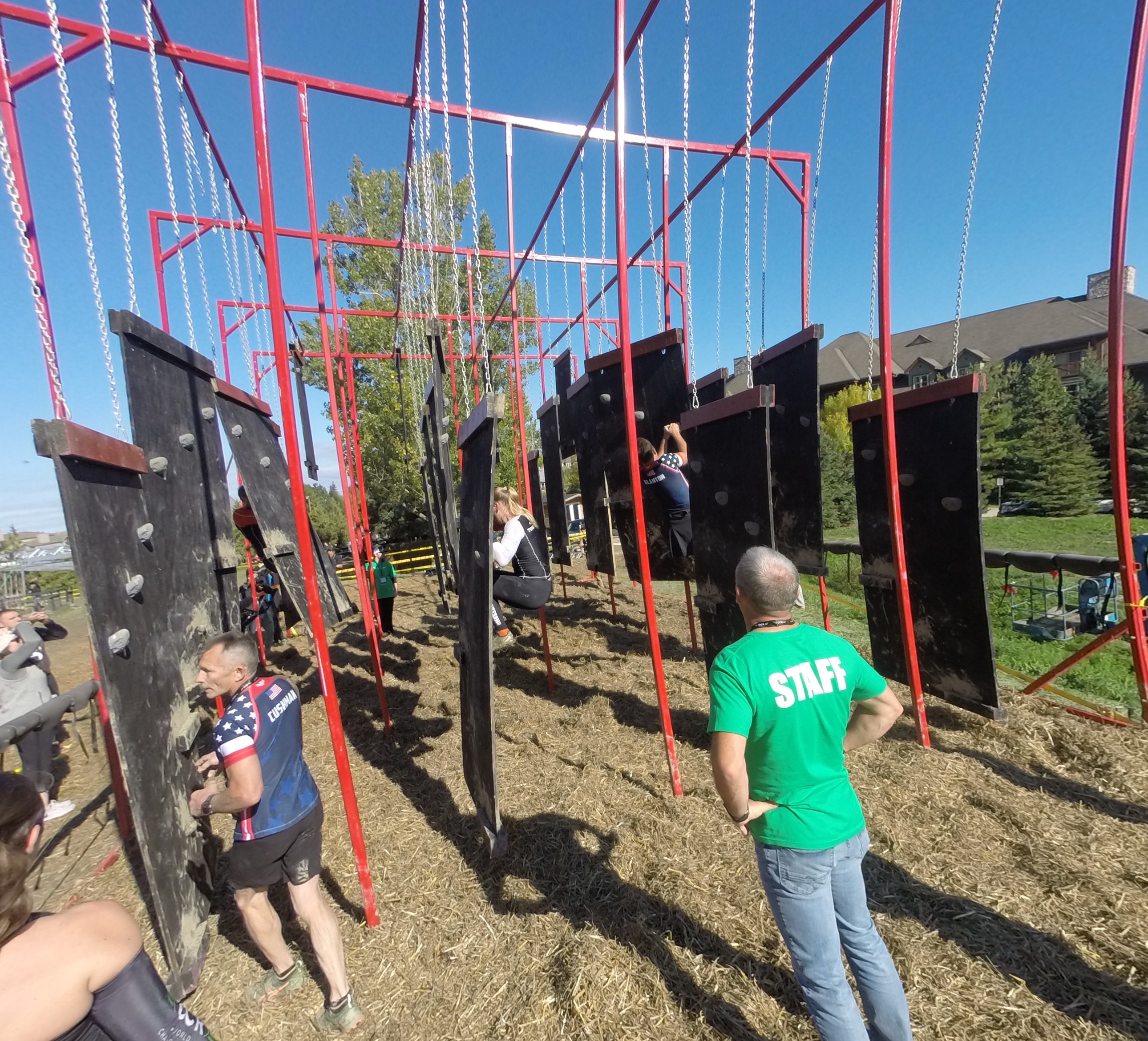 We were very close to the end and came up to my LEAST favorite obstacle of the day – Skyline.  This is a bar you grap that slides down an incline, but that you have to make “hop” over a series of ridges (think ANW again).  This one I grabbed, slid, came to a stop.  Tried to kip up and over the blockage, and missed.  Tried again, and my grip slipped, dropping me into a nice deep pile of straw.  I paused here, lying on my back for a few moments, contemplating my life choices before continuing on.  I did not give this one a second try as I landed pretty hard on my ankle, and had already given up my band after a couple of tries back on the Platinum Rig (trying to leave something in my tank for the next couple of days). 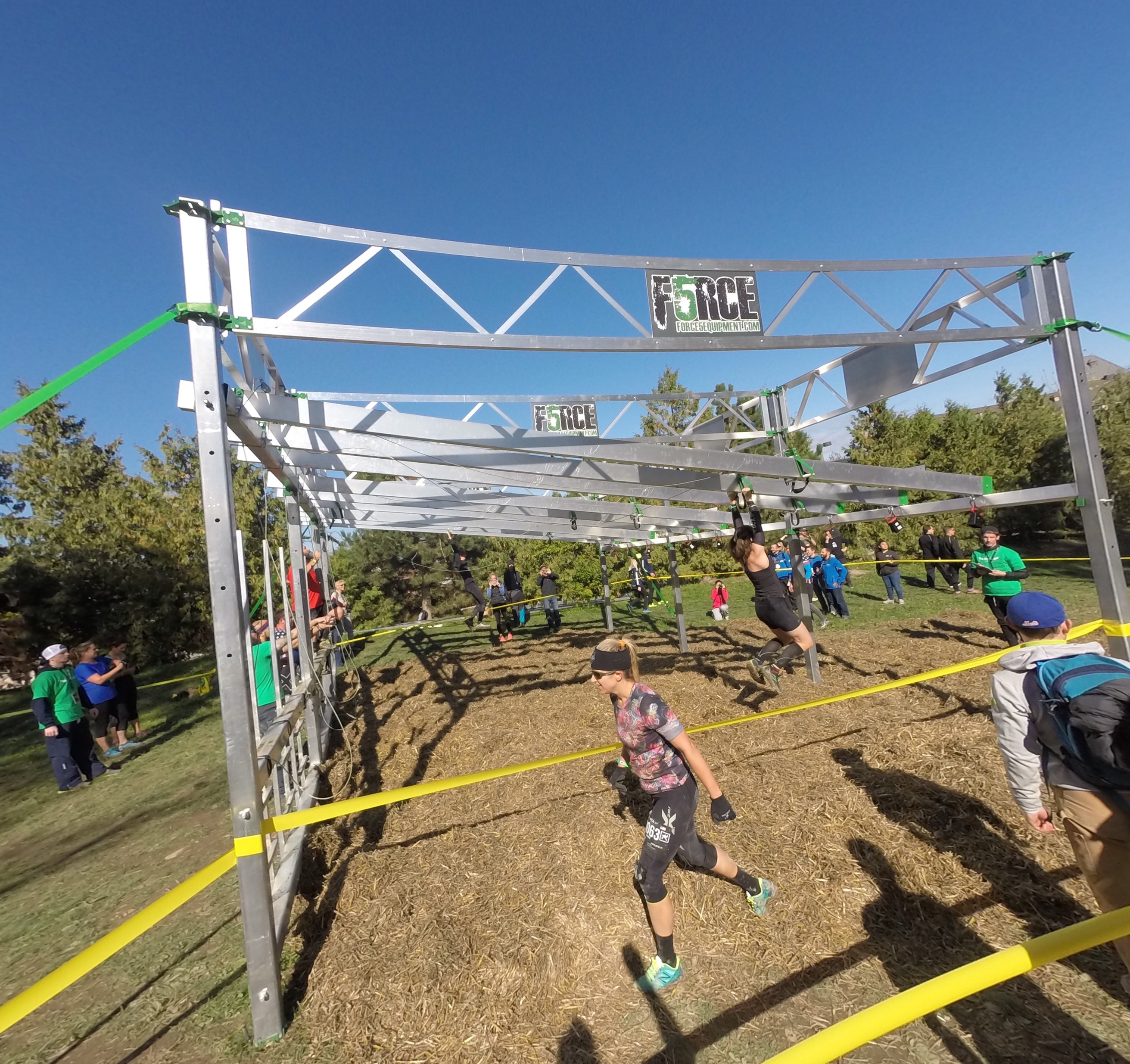 Then on to Urban Sky, a very cool obstacle with spinning angled wheels followed by spiraling monkey bars.  This one took me a couple of tries, but I managed to get through it.  Climb the steeply slanted wall using the attached ropes, and a short dash to the finish line completed the course. 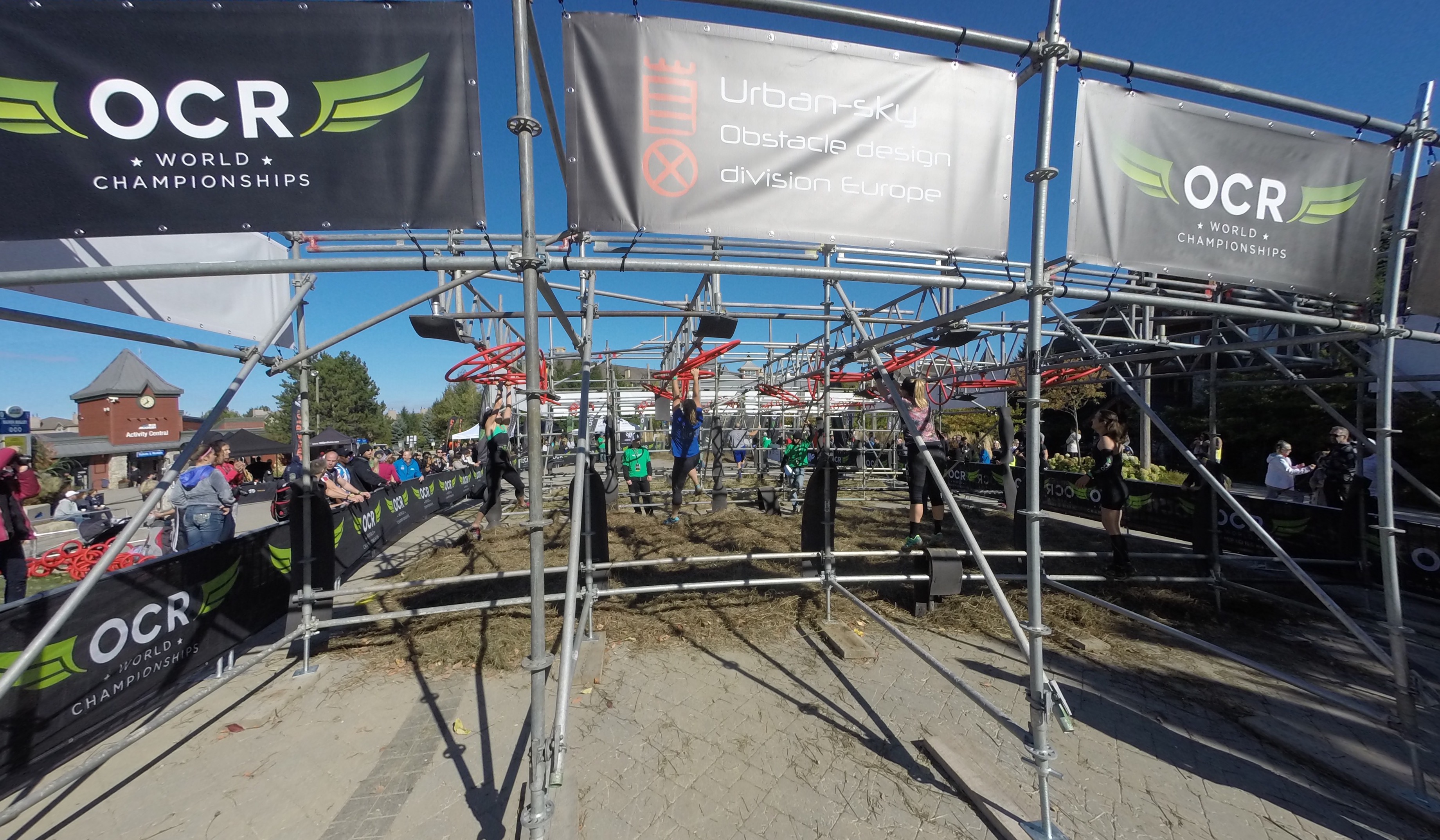 After day 1, it appears that Adrian and company have definitely raised the stakes on this year's OCRWC, and many of the obstacles on the short course proved very technical and grip-intensive.  I'm not sure how my arms were so pumped after only 3k and 15 obstacles… I have a funny feeling that the full set of 48 tomorrow is going to get ugly.

Watching the Men's Pro heat later go off, and taking multiple shortcuts to catch the action at the Platinum Rig and the finish line gauntlet made for a really exciting race, and the best in the bunch finished off this course in a remarkable 15-ish minutes. I loved the short course format and hope to see it again.