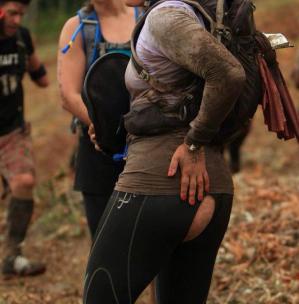 The issue of what to wear to an OCR whether it be an obstacle race, mud run, or another event is always one of the first and most asked questions for many people in the sport. Once people have the main idea of what they want to wear to an event there comes a more personal question, should I go commando (without underwear) or wear underwear while racing. No matter what gender you are this question is asked over and over again.

It is a funny question but one which is asked over and over again and warrants some exploring. For many in the sport, this question can cause as much of a battle as the whole butter side up or butter side down from the Dr. Seuss The Butter Battle Book. The answers to this age old questions are varied and vast with each side stating important points to consider.

Those in the Commando Camp:

Going Commando or racing without underwear on is popular for many and donning a pair of underwear underneath their compression tights is out of the question. Many say that wearing an additional layer of underwear is just one more layer to get wet and muddy. Others state it is a comfort factor.

Those in the Underwear Camp:

For many thinking about racing without underwear on is out of the question. For those racers racing without undies is like racing naked. Many note that the benefits to racing with underwear on are less chaffing and some note an added layer of protection against the mud and elements. Others have noted they train with it on so they race the same.

One woman, we asked noted, visible panty lines should be the last concern while racing. Some of the men asked said they wore compression underwear than a compression short on top of that and noted it helps keep everything in place as well adds an extra layer of protection from the barbed wire.

Most who choose the underwear route note that a snag on barbed wire or ripped short or pant can lead to an embarrassing show for those around them and prefer to not bare all in front of the other racers. Whether a racer decides to race with or without underwear all can benefit from a few tips to help make race day better.

Whether you like undies or not, a cardinal rule of OCR is no cotton. This extends to underwear with the cotton left at home good alternatives include wicking sports underwear available at sports retailers like REI and EMS used by hikers. They keep their shape when wet and expel water and mud. Others like to use a speedo or bikini bottom.

Whether underwear or not is for you. One of the most important things to remember is a change or pair of underwear post race. It is important to change out of wet dirty underwear as soon as possible after the race, especially if you are prone to infections.

Whatever your preference on race day is to make sure you have tested all your gear prior to the race. Like the old rule of thumb says, nothing new on race day. Try a training session each way and decide what works best for you! In the end, it's completely a matter of preference and one option is not better than another.

Where do you stand?

What do you do on race day?