For years now I’ve been trying to find ways to push my limits in search of that DNF (Did Not Finish).  I realize that may seem like a strange goal to many people.  But ever since I started Obstacle Course Racing (OCR) over six years ago, I keep doing things that would not have seemed possible…only because I tried.  Each step has been to a new plateau for me something just out of reach, but ‘possible.'  And more importantly, probably something I could fail at just as easily.  However, the only way to find your limit is to reach it.  For me though, it’s also a race against the clock.  Hitting 60 this summer means time is not on my side.  I’m not exactly getting better with age…trust me on this one!  So the Spartan Sprint in Miami was the perfect opportunity to push for something I hadn’t tried before….back-to-back races.  I’ve done much longer races, but there’s a difference coming back the next day…Ohh, I can tell you now, there is a difference!! 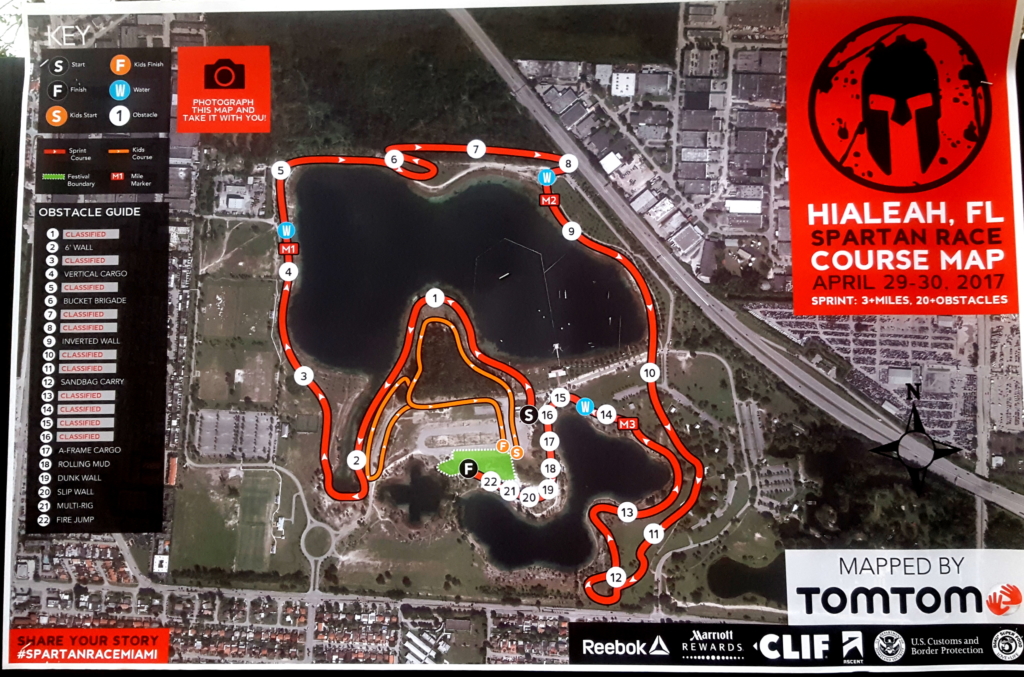 The weather for race weekend turned out to be gorgeous…for the Miami Chamber of Commerce that is.  Mid 80’s both days, but with a good breeze and…thank the racing gods…many passing clouds.  I’ve been at this venue before (Amelia Earhart Park) but haven’t done a Spartan here or any Spartan race for a bit.  I was instantly impressed again with how Spartan improves the organization with every event.  From parking and registration (thanks, Carla and Sarah!) to the festival area layout and the start and finish line arrangements.  They also had LOTS of volunteers.  I mean, they were everywhere…which is a great thing to see since races just can’t function smoothly or safely without them.  Spartan also had Garfield Griffiths, race director extraordinaire, much to my surprise.  My expectations were high for a good race weekend!  Expectations though were not so high now for my goal.  A Garfield course (which I took as a personal affront to my goal quest by the way) and the Miami heat are not conducive to what I needed to accomplish. 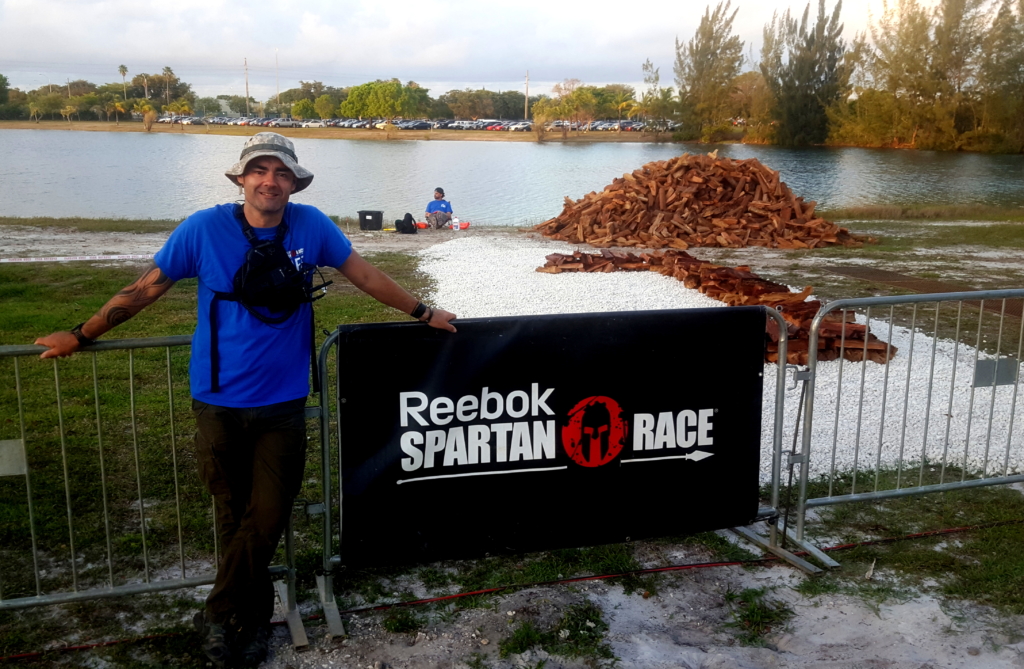 I was not disappointed in the course.  At this venue, any course is going to be flat and fast, as long as you can handle the heat.  It was roughly a four-mile course, and the elite males came in at just under 30 minutes Saturday.  The course layout itself was excellent.  Good mix of obstacle difficulty on the course and no overly long stretches of running (that gets a triple plus in my book!).  Another thing Spartan has learned is that bottlenecks at obstacles suck!  Saturday I went out in a mid-morning heat which must have been close to the 250 max.  But with the first obstacle placed a ¼ mile out from the start we were spread out nicely by then…which means I was hanging back with the rear guard.  So there were only a few minor delays on Saturday and none on Sunday when I went out in the last heat.  Early on we hit whatever-they-call that pair of square post hurdles.  It’s an awkward obstacle, but once I had a technique, it wasn’t bad.  Except for Sunday, when I lost my concentration on one and found new ways to bruise myself.  Twisting around a non-round piece of wood isn’t as much fun as it sounds!  After that, we were on to the over-under-through obstacle along with the 6’ wall.  Although there was a 7’ wall later in the race, that was pretty much the extent of vertical walls.  Surprised…not complaining.  We also hit one of my favorites in that first mile the vertical cargo. No, seriously, I like it. Later on we would also have the A-frame cargo net coming into the final ¼ mile or so. 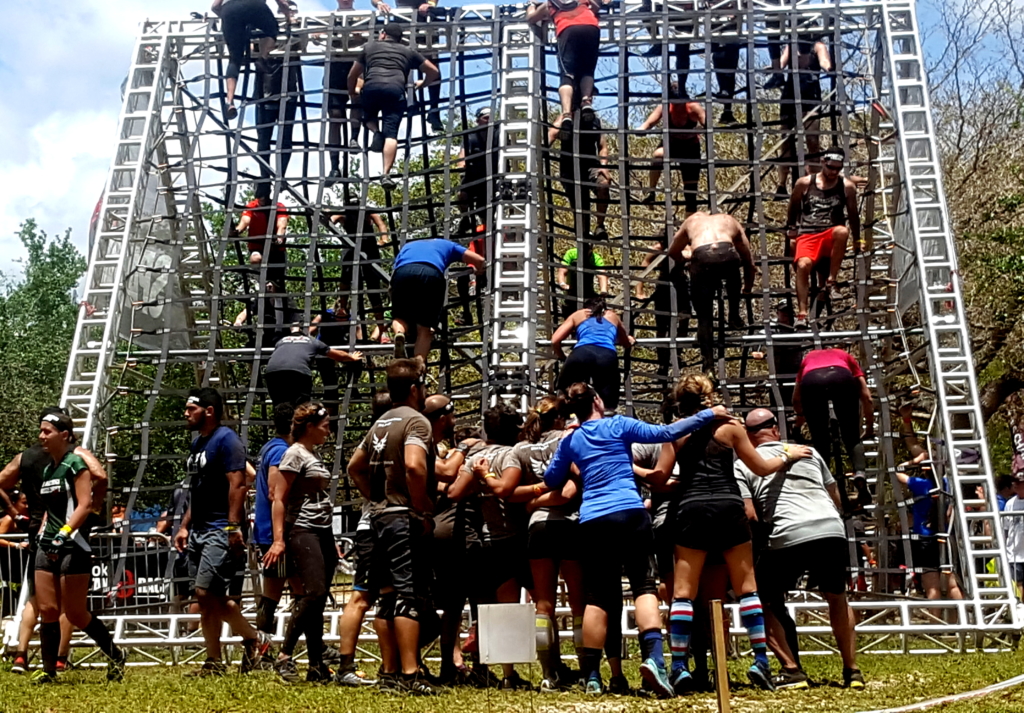 A little more than a mile in we hit the bucket carry, with the sandbag carry at mile 3.  In the heat, both of those are a real challenge.  But while they were certainly difficult, neither was of the ridiculous distances that we’ve come to see at some races.  A definite sign that beginners are also welcome at Spartan races!  While the bucket carry was the familiar five-gallon pail, the sandbag was a style I hadn’t seen before.  Despite being exhausted on the second run Sunday, I had a better technique I guess.  Saturday the bag kept trying to slide off the front of my shoulders and either try to choke me to death or break my neck…I couldn’t tell which.  But during the sandbag carry, we also got our first and only taste of the water this race…a shallow trudge but it was cool and most welcome.  While we did finally get a full dip in the water at Rolling Mud and the Dunk Wall, it was at the very end and not the lake.  And actually, I don’t believe there was mud at Rolling Mud.  At least nothing I noticed, although it was still great to finally get cooled off!  In fact, there was no mud anywhere on course.  Probably due to the venue rules.  As an OCR traditionalist though (can you say mud run kids)…I sure did miss it.  Particularly at the barbed wire crawl, which despite having no mud was pretty challenging as one of the longest I’ve ever done.

Of course, the Spartan favorites were there too.  Including everyone’s special favorite, The Rig, just before the Fire Jump (which strangely enough was more of a smoke jump for a while early Saturday).  Somewhere around the midway point was the second most feared obstacle, the rope climb, and mixed in was a new twisting monkey bar type of rig.  Not to mention a new style of traverse wall (new to me at least).  Although I gave the traverse wall a so-called shot, my hand and wrist issues kept me from really making attempts at these obstacles.  What I did do surprisingly well this weekend was the inverted wall and the slip wall.  Somehow the slip wall comes very easy when all these others just kill me!  Probably because when I get all that weight of mine perpendicular to the wall, it will take a fifty-five-gallon drum of axle grease and hurricane force winds to loosen the grip of my Icebugs!  And the inverted wall usually results in some leg cramping for me, so that was a huge mental boost when I made it over both days without incident. 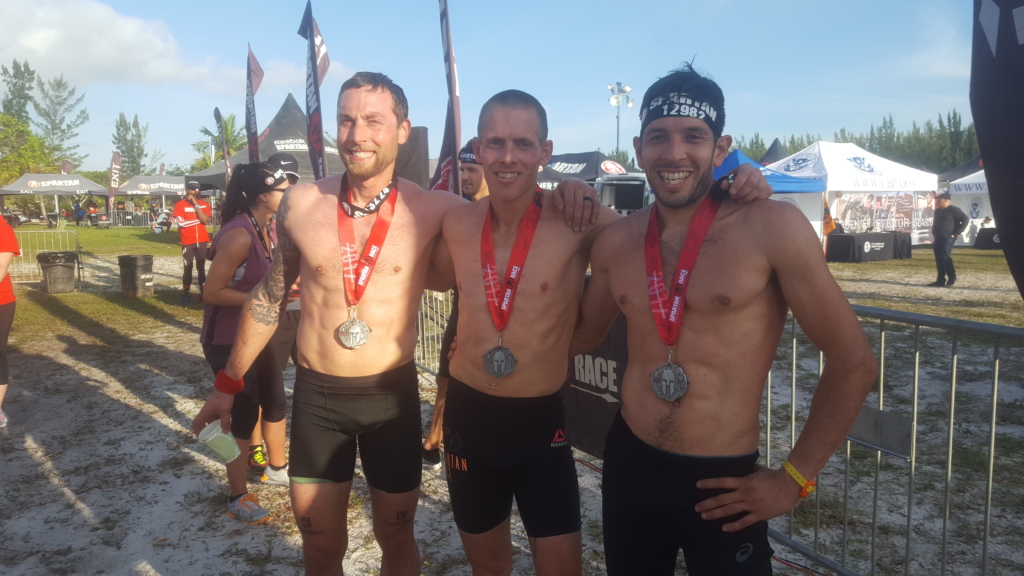 Two other obstacles were not quite as kind.  Because of the hand as mentioned earlier, I was very skeptical about the Atlas Carry and the Herc Hoist…both personal favorites in that I feel great being able to do them.  But knowing that I was physically restricted, I walked myself mentally through the speech I would give to the volunteers that I had to use the lighter weights because of blah-blah-blah-blah.  And every time I got there I found myself at the regular weights…and somehow getting it done.  And like OCR as a whole, doing something you just “knew” was impossible is worth the trip.  Speaking of miracles, for some reason, I haven’t had much luck with the Spear Throw lately.  But on the course Sunday, when I had my lowest expectations (which is out of character for me), I took an extra moment, balanced the spear, checked that the rope was clear and let 'em rip.  Amazingly it stuck!  I was so excited (shocked really) that I absent-mindedly walked over to do the penalty until it hit me…wait, I made it…no penalty this trip!  Sometimes it’s the little things. 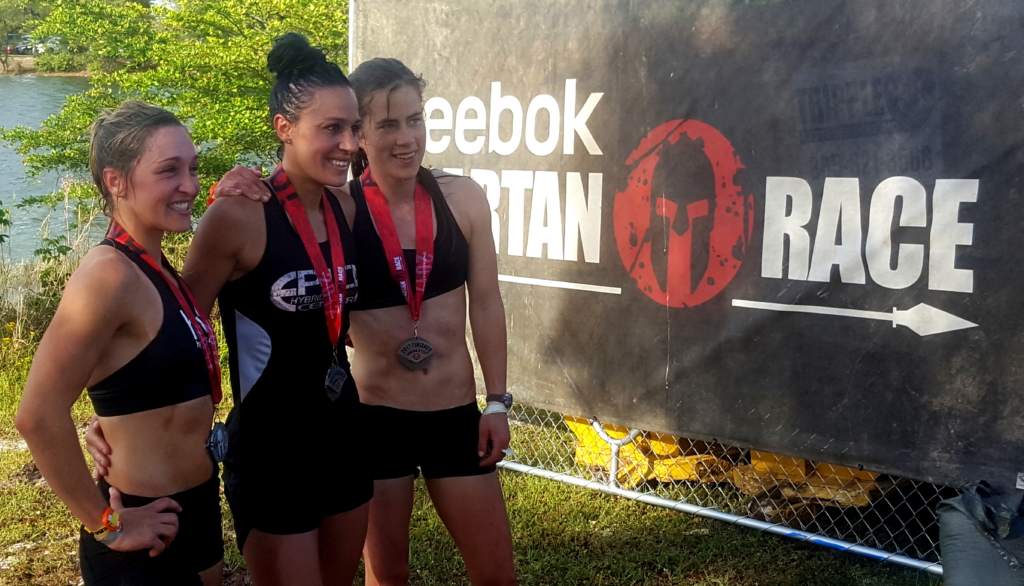 In the end then, although I spent much of the race on Sunday waiting for the fuel gauge to hit empty, it never did.  Maybe it was better conditioning (doubtful with what was going on for the last two months personally); the fact that I made sure to use my gel packs and hydrating before, during and in between the races; staying positive and truly being excited about this opportunity, or all of the above.  Whatever the reasons, not only did I complete my goal of finishing back-to-back races, I improved my time on Sunday by about 10 minutes.  Except, there’s even more to this amazing weekend.  After my plans had been set, apparently the inaugural USOCR Short Course National Championship Race was set to run the morning of Sunday’s Spartan weekend.  Obviously, it was an exciting opportunity to be there for this race.  So when I ran into the promoters on Saturday and was given a chance to run it Sunday morning…well, could I say no (as if no was ever actually going to come out of my mouth)?  Then, with minutes to get ready after the Championship elite starts Sunday morning…and through the valiant efforts of Laura from the Spartan staff…I had my bib number and chip.  So the miracle of this weekend was not just doing two Sprints, but back-to-back-to-back races!  As I said earlier, OCR for me has always been about pushing your limits…and maybe about not over-thinking something.  When something presents itself, sometimes you just have gone for it…and figure out later if you can.

One thing I didn’t give consideration to this weekend was gear.  Not being a particularly well-provisioned enthusiast, surprisingly it didn’t occur to me until prepping during race week that I’m not equipped with certain gear for back-to-back race days.  Keep this in mind if you decide to try this on your own.  Many people won’t have this issue, but if you do, make plans for a quick laundry in between while you recover!  Or better yet, pick up those missing items.  In closing, I also wanted to give another shout out to all the volunteers that came out this weekend.  Some of them were my OCR buddies (even got my final medal on Sunday from Lynn at the finish!) and plenty of friendly faces during some grueling hours.  Not to mention a nod to Spartan for a nice volunteer tribute after the race Sunday. I also wanted to give some recognition to the MC.  No one ever gives credit to these people, but probably because my gear ended up on his stage, I got a chance to see how much goes into something we all take for granted…great job!!

I am most fortunate to be in a position where I can still participate in OCR and even more thankful to be able to contribute and be involved through my friends at Mud Run Guide.  This weekend, for the first time in a while, I feel beat up enough to have earned those medals.  It’s that feeling that I remember as an OCR newbie…when you know you’ve given all you’ve got and completed something you thought might just be out of reach.  They used to say “You’ll know at the finish.”  Well….I know….And I can’t wait to know that feeling again.  Wonder what I can do next……