The British shoe company, inov-8, has is about to revolutionize the sports footwear market. The company has been working with leading scientists to incorporate the Nobel-prize winning graphene into their award-winning shoes. inov-8 has teamed up with the University of Manchester to become the first outdoor shoe company to use graphene.

Early laboratory tests have shown that the rubber outsoles of these shoes are more stretchy and more resistant to wear. Those inside the obstacle racing industry are excited about this new technology. As obstacle racing offers some of the most rugged conditions of obstacle course racing.

Graphene is the thinnest material on earth and is 200 times stronger than steel. First isolated at The University of Manchester in 2004, it’s the world’s first two-dimensional material at just one-atom thick and has the potential to revolutionize many areas of technology.

Graphene is produced from graphite. The compound was first mined in the Lake District fells of Northern England over 450 years ago. Other applications of graphene include battery and laptop technology. While most of the proposed applications are in the tech sector applying this groundbreaking tech to the outdoor industry is nothing short of revolutionary.

“Off-road runners and fitness athletes live at the sporting extreme and need the stickiest outsole grip possible to optimize their performance, be that when running on wet trails or working out in sweaty gyms. For too long, they have had to compromise this need for grip with the knowledge that such rubber wears down quickly.

“Now, utilising the groundbreaking properties of graphene, there is no compromise. The new rubber we have developed with the National Graphene Institute at The University of Manchester allows us to smash the limits of grip.

“Our lightweight G-Series shoes deliver a combination of traction, stretch and durability never seen before in sports footwear. 2018 will be the year of the world’s toughest grip.”

Commenting on the collaboration and the patent-pending technology, inov-8 CEO Ian Bailey said: “Product innovation is the number-one priority for our brand. It’s the only way we can compete against the major sports brands. The pioneering collaboration between inov-8 and The University of Manchester puts us – and Britain – at the forefront of a graphene sports footwear revolution.” 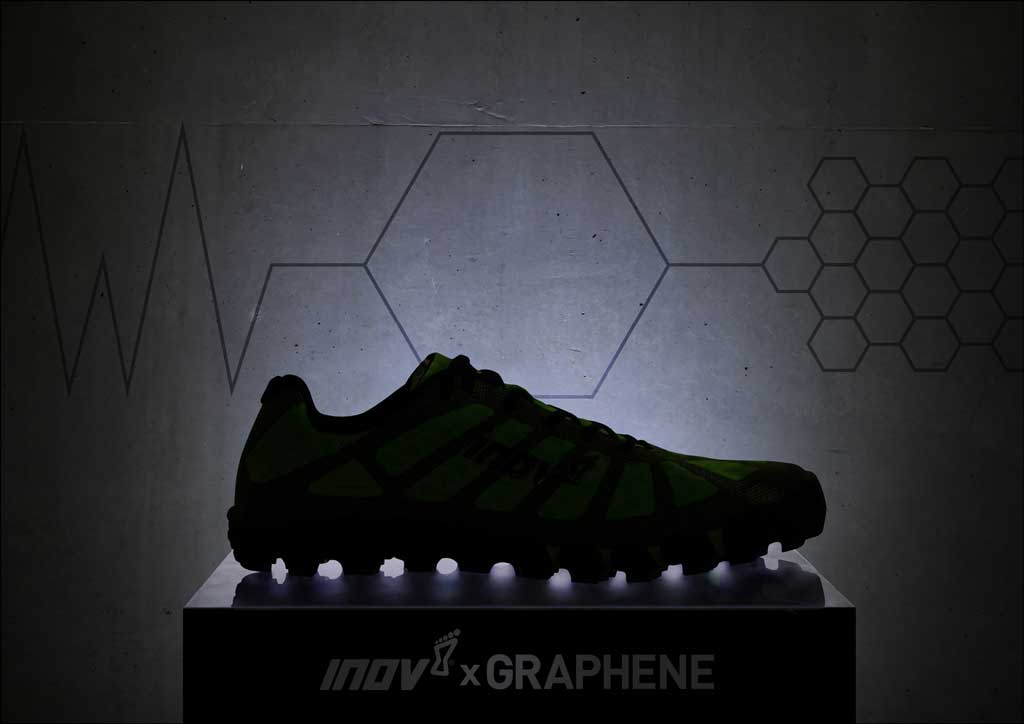 “And this is just the start, as the potential of graphene really is limitless. We are so excited to see where this journey will take us.”

Applying the New Technology to the Outdoor Industry

The scientists who first isolated graphene were awarded the Nobel Prize for physics in 2010. Building on their revolutionary work, the team at The University of Manchester has pioneered projects into graphene-enhanced sports cars, medical devices, and airplanes.

Dr. Aravind Vijayaraghavan at the University of Manchester said: “Despite being the thinnest material in the world, graphene is also the strongest, and is 200 times stronger than steel. It’s also extraordinarily flexible, and can be bent, twisted, folded and stretched without incurring any damage.

“When added to the rubber used in inov-8’s G-Series shoes, graphene imparts all its properties, including its strength. Our unique formulation makes these outsoles 50% stronger, 50% more stretchy and 50% more resistant to wear than the corresponding industry standard rubber without graphene.”

“The graphene-enhanced rubber can flex and grip to all surfaces more effectively, without wearing down quickly, providing reliably strong, long-lasting grip.”

“This is a revolutionary consumer product that will have a huge impact on the sports footwear market.”

Currently, only 17 pairs are out in the world secretly being tested by inov-8 athletes like Peter Maksimow who recently gave the world a little preview. The rest of us will have to wait until June 20th for the official launch of the new graphene inov-8's. Until then check out inov-8 for more information on their current award-winning shoes including the newly redesigned X-Talon with sticky grip technology.