So much mud you guys. This dirt was on my face for 2 miles

My apologies dear readers for bringing you this recap so late after the race. To be honest, the past few weeks have been the most difficult of my life. Our dad passed away on Thursday, September 6 after a long battle with kidney disease; three days before this race. Come race morning the weather was terrible with pouring rain and chilly temperatures. My sister Patti and I thought about staying home because our hearts really weren’t in it but we knew our dad would want us to race and be together. He always enjoyed seeing photos and videos of us on the course at various venues (especially the Spartan fire jump) and got so excited at a video of me finally landing my first spear. It was important to our dad that we exercise and eat healthily so in that spirit and with him on our minds we headed down to Maryland.

The race was held on Sunday, September 9 at the Hopkins Game Farm in Kennedyville, Maryland, about a two-hour drive from our homes in New Jersey. This is the usual location for both the fall and spring Maryland races. We had a 9:20 am open wave start, but with the weather, we arrived late and didn’t go until 10:00 am. There weren’t many racers with approximately 650 finishers and we heard several announcements encouraging people with later start times to go whenever they were ready.

General parking was $10.00, there was a minimal wait and it was close enough to walk to the venue. There was also VIP parking available for $20.00. Again, because of the weather, we decided to spring for VIP parking to get as close to the start as possible. In this instance, it was well worth it. Check-in was easy and quick. Kudos to the volunteers who braved the rain! After passing through the merch tent to the festival area we checked our bags for $5.00 each but parking was close enough where you could leave your bag in the car if desired. Porta-potties were widely available. Fortunately, all the ones I used were clean and stocked with toilet paper. There were also portable sinks with soap and paper towels.

Once in the starting corral, the MC had us get in 2 lines facing each other, link arms, sway and jump around while he shared some quick words of encouragement. Finally, we were off!

This was my first Savage Blitz and I wasn’t entirely sure what to expect, other than a shortened course and not having to do certain obstacles such as Shriveled Richard, Colossus, Sawtooth or Davy Jones Locker. I was kind of bummed at missing these, but at the same time was ok with not having to get in the water (looking at you, Shriveled Richard). Wheel World and Savage Rig (the final obstacle) were viewable from the festival area.

The terrain was a mix of flat open fields and woods with several natural water crossings. There were some changes in elevation, and a few of the hills were steeper than I expected compared to my experience at the venue last year. That said, after speaking with friends who did the Spring 2018 race here, the terrain was similar. Because of the rain, there was so much mud which made the course even more challenging but still fun.

I saw two water stations along the 3 mile-ish course (although I may have missed one). In my experience, Savage Race is the only brand where full bottles of water are given out as opposed to cups. It felt a bit wasteful and I observed team members and couples sharing. I’m guessing they have a good reason for setting up their water stations this way. If you know the answer feel free to comment below! 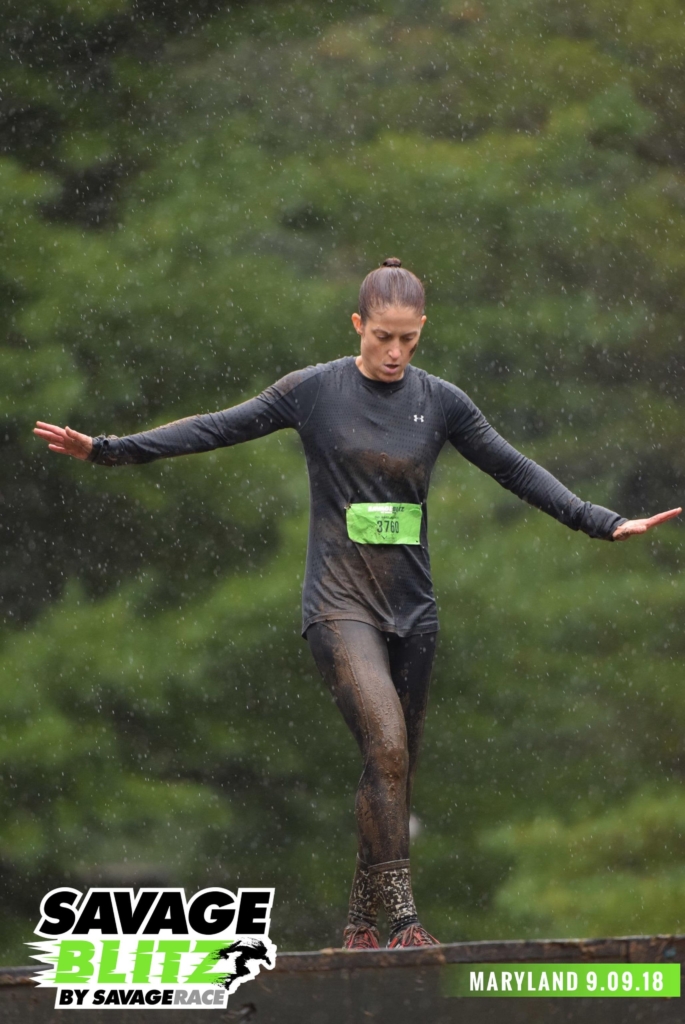 With regards to the festival area, it felt a bit subdued, I suspect because of the weather as both racers and spectators were huddled under the merch tent to avoid the rain. I noticed some tables and chairs where you could hang out, as well as food trucks (BBQ, shaved ice, healthy food) and sponsor/vendor tables but frankly, I was mostly interested staying dry for as long as possible before the race and getting warm right after. Guessing I’m not the only one?

I was particularly impressed by the Savage Syndicate medals, which are earned by running two or more events within a single calendar year or by running more than one lap in the same race (Savage + Savage or Savage + Blitz). They’re HUGE. The state ax pins indicating where the race(s) were completed are a nice touch. I earned my Syndicate at this event and claimed my medal easily from the designated tent where the volunteer only had to look up my name to verify the races I completed.

4/5… Savage Blitz is an awesome introduction to anyone wanting to try Savage without making a commitment to the full course but also challenging enough for the experienced OCR athlete. And it’s really fun!