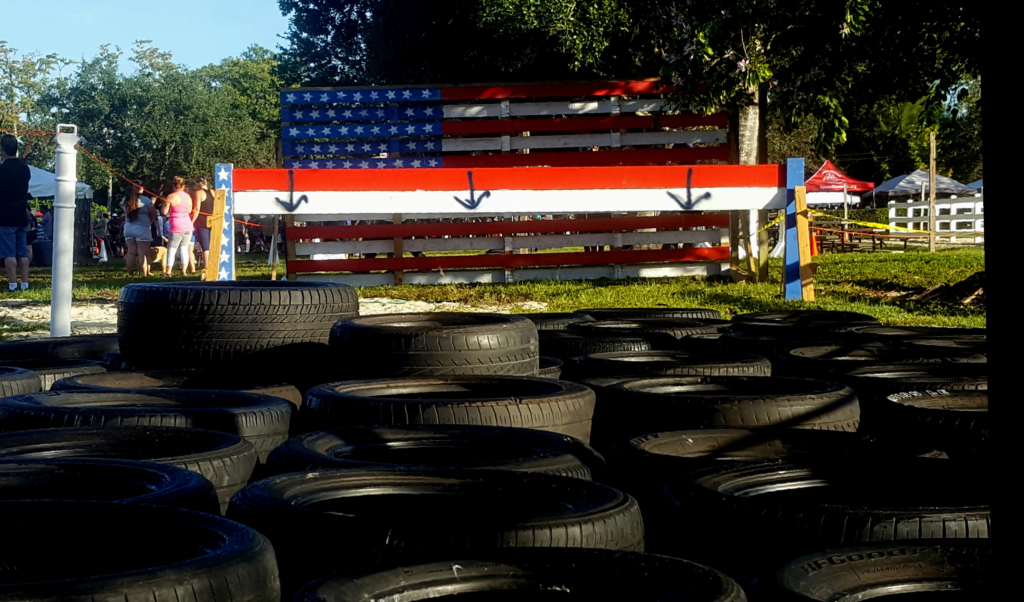 I’ve only done a handful of local races, meaning races that are annual or semi-annual events, not put on by the national race promoters. This one was different though. The Parkland Soldier Rush was very much what I would call a hyper-local race, a community race which had the feel of a community get together as much as an obstacle course race (OCR). Make no mistake though, this community race was every bit an OCR.

With its focus on the military and first responders, I wasn’t surprised at all with the excellent organization of parking and registration. Due in no small part to the JROTC of Marjory Stoneman Douglas (MSD) (more on the JROTC later). Thanks to Susan though, I was able to skip registration initially to catch the elite wave go off. That was almost a costly mistake (more on that later too).

One important lesson to remember at any race…read the instructions! That may seem odd advice, the point being is that every race has a different schedule. My normal routine of fleshing out the course, checking out the obstacles and festival area before running did not take into account THEIR schedule. The last timed heat was going out at 10am…I only had time to literally throw my pack into the registration tent (hoping someone would watch out for it…which they did…have I mentioned military/first responders?) and dash over to the start line. I was the last timed runner out. The timekeeper said “let me just turn the whole freaking system back on for you, since you couldn’t manage to get to the starting line on time like everyone else.” He was very polite and accommodating, and likely didn’t say those exact words. But I heard it like that, as I was mortified, as I am notoriously unforgiving for being late. 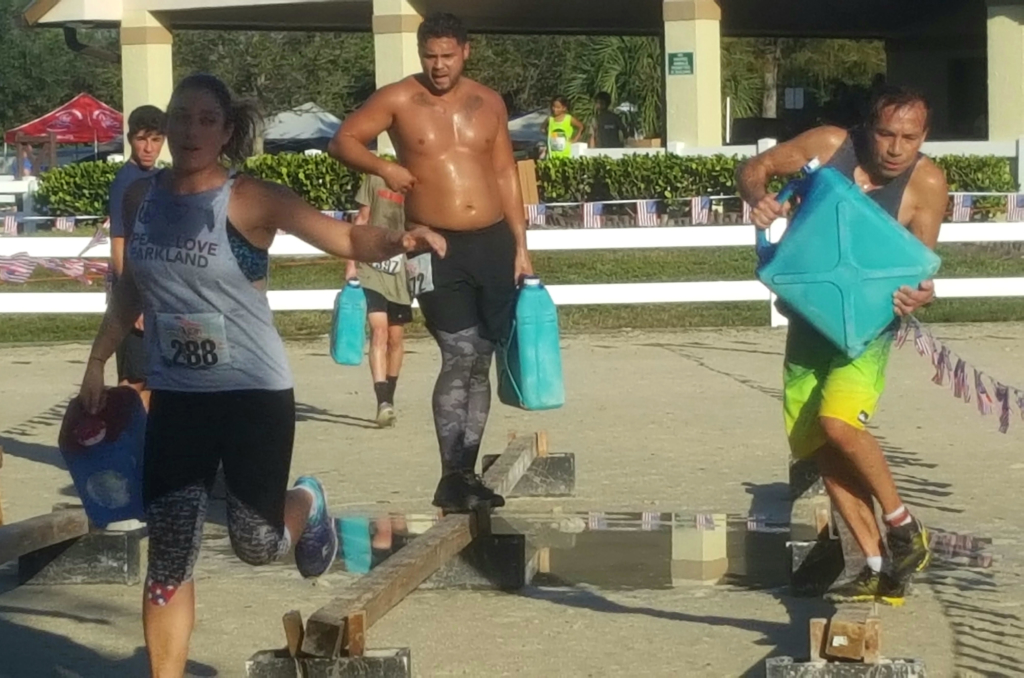 I got over it quickly though, discovering the first obstacle, the Hobie Hop (named after OCR legend Hobie Call).Now, they didn’t call it by that name, but back in 2013 (I believe) it showed up at the CitiField stadium race. Simply put, it was a resistance band around your ankles, followed in this case by about a 200 yard ‘run’. Patience is NOT one of my strengths.

Neither is being cooked in an oven. Another thing you should do before a race is check the weather for the venue, not where you live. There was a 5-10° difference between them. Doesn’t sound like much but when that means you’re into the mid 80’s in November, that is. What’s worth noting is that the sun feels like it’s 6″ above your head here and for those who haven’t raced in FL, like the song says, “If you ain’t been there, you wouldn’t understand.” One of the few things there wasn’t much of on this course was shade!

Fortunately I did have my hydration pack with me…safely stashed away in my knapsack, securely stowed at the registration tent. Something there were plenty of: volunteers. From what I could tell, most of these were part of the MSD JROTC. Hundreds of them! Well, might have been 50, but those kids move around so fast I couldn’t really tell (and yes…everyone under 30 is a kid to me, so just deal with it and let’s move on). 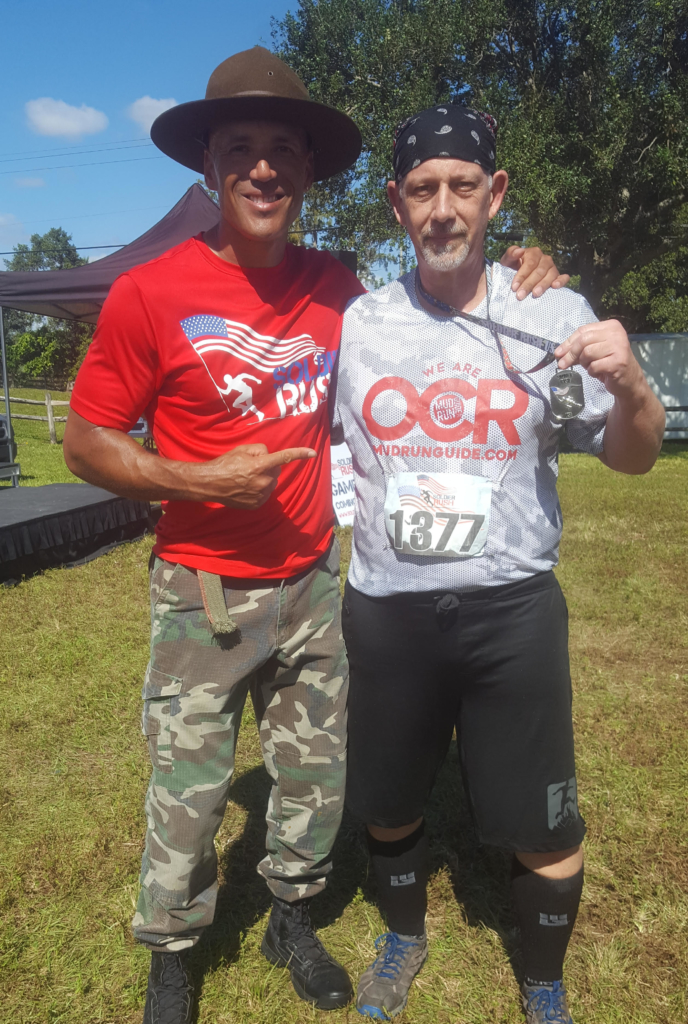 What I liked quite a bit about this course was the throwback feel to the old style OCR course challenges. While there wasn’t much to be done about shade, they did manage to fit quite a lot into a relatively small venue…warming my little engineer heart immensely. After the Hop, there was a zigzag course laid out which must have been close to a mile long in total.

This section included a log carry, a tire carry (including several short walls to hop over), and a double bucket carry, about half filled each with dirt (dirt, by the way, being a commodity in south Florida, whereas sand is the currency of choice and what your clothes are generally full of after a race). Following this was a longer stretch of running broken up by some of the many walls on the course, a number of which were set up in series.

At this point we’re back into the festival area where most of the race was easily accessible to spectators. It’s also where we hit the first of two water stations and one of the oddest obstacles I’ve seen…a water balloon toss. Which was the only obstacle I failed…yes, I completed the monkey bars, traverse wall, all the carries and missed the water balloon target. I did, however, manage two of three hits at the pistol range, so I managed to redeem myself somewhat.

After a tire flip (they loved tires here!) we came into one of the most grueling sections of any flat course I’ve seen. It started with another bucket carry, back and forth through the horse jumping practice course with short hurdles we had to step over (the venue was an equestrian park after all). Not extremely difficult unless the sun is searing through to your brain by this time. We went directly into a long tire drag/carry, an A-frame cargo net climb (yes…still a favorite of mine) and on to the labyrinth of death, although I don’t think it was called that officially. This obstacle was a water jug carry through switchback turns involving two 16’ balance beams, two crawls under tarps, a couple of high-stepping tire fields and a handful of crawls under faux barbed wire. On a normal November day it would have been a respectable challenge, this day it was brutal. The lack of shade on those carries really made me feel sorry for the horses that had to do this every day…carrying a person! Guess I was getting off easy.

Recharging at the second water station, and a GU gel pack later, we headed out on what was probably a mile or so loop around the east perimeter. While mostly straight up running, the race inserted a scattering of walls again, to break it up, as well as the traverse wall on the far side. In the mix was another tire flip and a tire high-step field leading into the eight foot climbing wall. I told you, they do love tire obstacles! 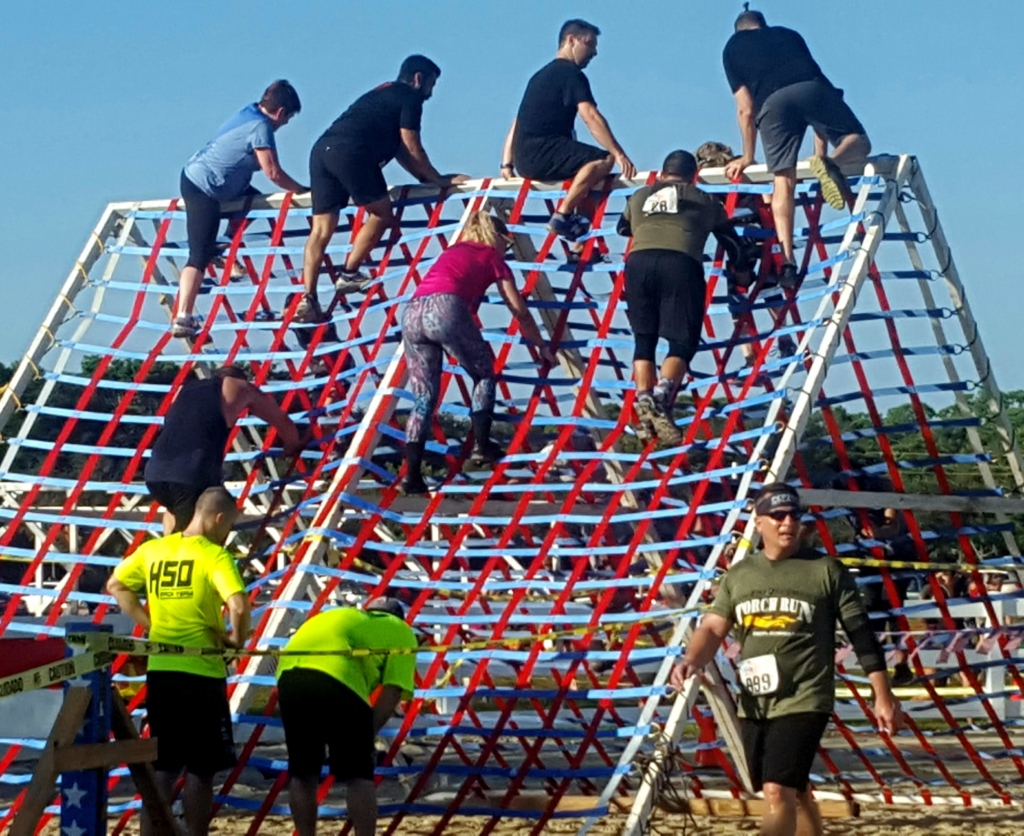 Next stop would be the home stretch, another series of walls leading into a water pool with faux barbed wire. For some reason, people were walking around it to get to the inflatable slide. Why anyone would pass up the water pool in this heat was more than I can figure out…I’d been waiting for this all race. Besides, one thing I did know…dry skin tends to stick to a vinyl slide…I’ll take as much of my hide home as possible, thank you very much.

Since my initial walk-about in the festival area was cut short, I took more time after the race to check out the festival area some more. The festival area was actually a bit larger than expected. They didn’t have any food, only frosty drinks I think, most likely because the race ended at noon. But in line with the concept of a community event, many local businesses you normally don’t see at an OCR had booths set up. 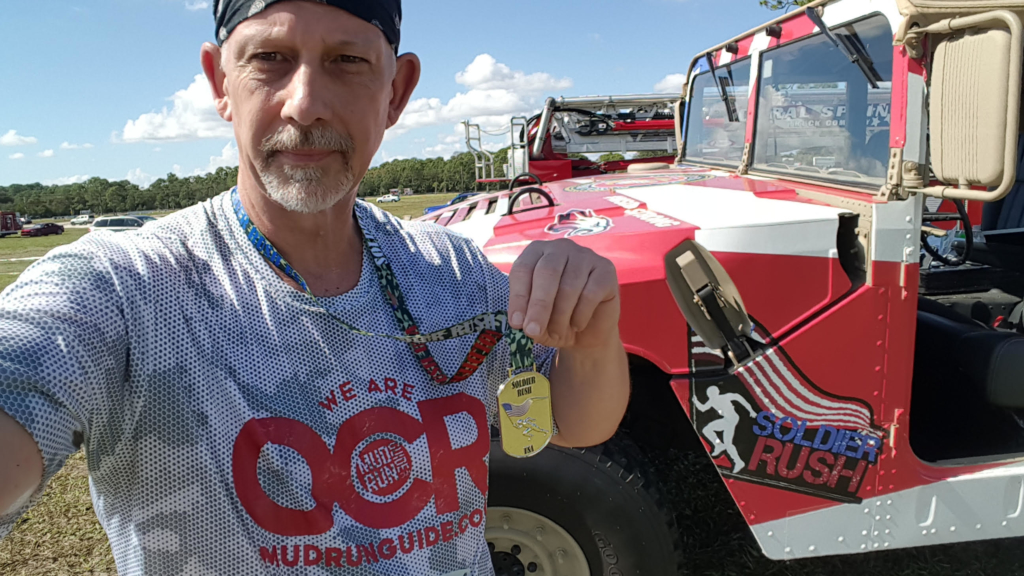 I found this race a good challenge for obstacle racers of any level. 5 out of 5 for someone that wants to get their first taste of OCR or for those experienced racers who want to introduce OCR to their interested…but tentative friends. An opinion I believe was shared by Mac, a fellow OCR enthusiast, and coincidentally, an MRG follower I ran into at the race. I’m looking forward to next year’s race and will definitely be at the start line on time then.

Have you done an Soldier Rush?

Leave your own Soldier Rush review and feedback...