On Saturday, May 11th Spartan debuted a new venue for the Boston Sprint. This year the race was held at the 508 International in Charlton, MA. The 508 International is located just over an hour outside of Boston and 20 minutes from the RI and CT boarders. This venue opened a couple of years ago as a motor cross venue. However, the folks at the 508 are not strangers to the OCR world. Last year Tough Mudder held their classic/tougher/5k/half and Toughest East races in June. I had a great experience at the venue then and couldn't wait to see what Spartan had in store. In typical New England fashion, the weather leading up the race didn't cooperate at all. One would this it was March with the 40-50 degree temps and the rainy, raw climate. Some around here have described it as “Maybruary”. Due to the massive amount of rain leading up to the race, a last minute change to parking for Saturday was not onsite. Instead, it was a 30-minute shuttle ride from Rutland. This occurred before when the race was in Rutland and the parking was in Charlton. Needless to say, racers weren't very happy about this. A few suggestions to Spartan going forward: First while conveying the message to racers, provide additional context as to why parking was being moved. A simple, “Hey, the field you would be parking in is flooded and we do not want to see anyone's car get stuck and the reason why the location is so far away is because of x, y and z.” Maybe it's just me, but I feel better when I have more context around it. Also, leveraging the Spartan community who know the area and can use local connections could possibly help assist with these types of issues going forward. Now back to that weather: Mother Nature took pity on us and shot this big huge fireball in the sky. No one could look at it directly otherwise it would make us all go blind (isn't that what the kids in the school yard use to tell you too?). With the sun being out temps moved into the low to mid 50's with a very cold wind. Basically, if you stood around it was torturous but once you were on the course the weather was perfect. 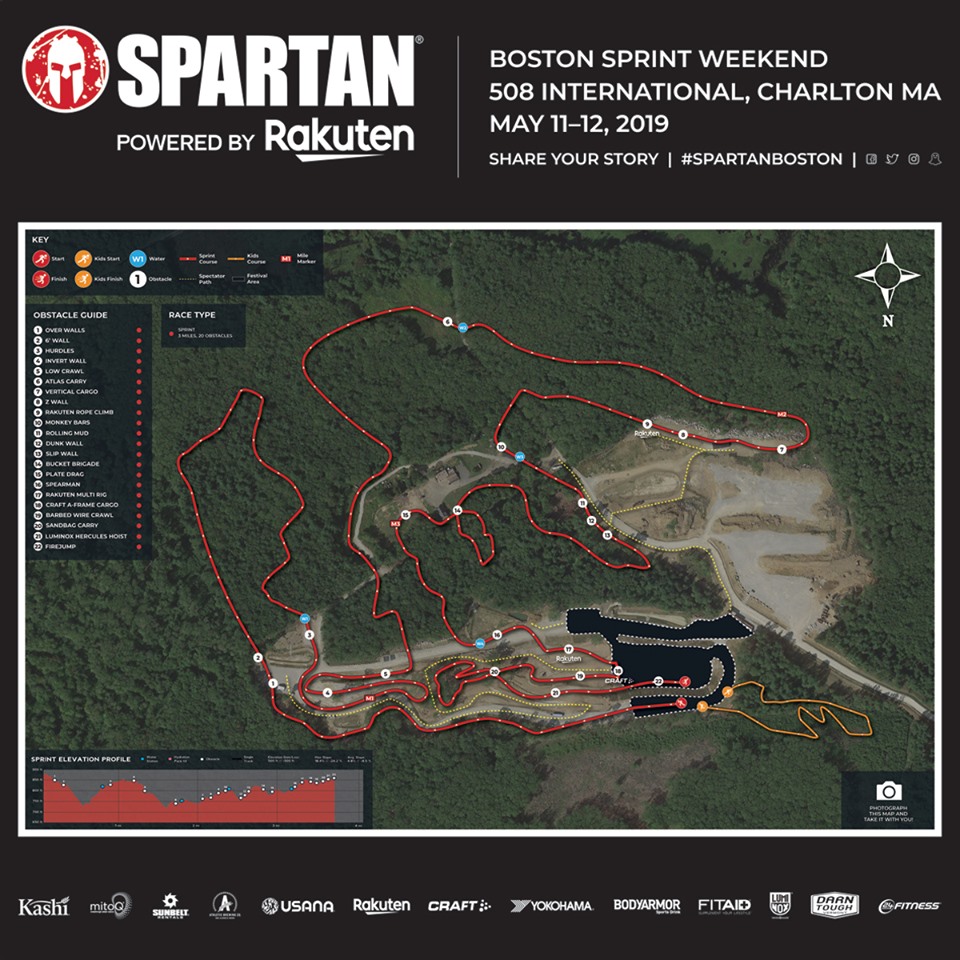 The course I really enjoyed. It was 3.5 miles without factoring in carry loops. By my watch, it came out to 3.85 miles. I heard a rumor that Spartan is looking to standardize race mileage a bit more which I am okay with. In years past prior venues lacked elevation, so in order to compensate, they made the course over five miles, which is more sprint-ish than sprint. The layout of the course was great, they had us start at the highest point at the venue and it was all downhill from there. There was some elevation, but in the grand scheme of things, one would consider this course a flat course. We saw a lot of the signature Spartan obstacles but we did not see twister or helix. The trail varies from fairly technical with hungry rocks and tree roots ready to take a bite out of your ankle to wide grassy, passable areas. I also loved how herc hoist was the last obstacle before the fire jump. Once you completed that obstacle, it was a nice descending sprint to the finish which was in the thick of the festival area. Which brings me to my next topic. In prior years the festival area was meh, not a ton of activity going on and not many folks lingered. This year the festival area was awesome. With the DJ stage in the middle, various contests and the 40ft rope climb, there were a ton of things to do. It really allowed for the most important thing: community. While waiting to watch the age group awards, I had the opportunity to talk to three sixteen-year-old girls who not only compete in age group, but dominate. According to one of the girl's mother, they all were competitive gymnasts who decided they didn't want to spent 8+ hours a day in the gym. Instead one found OCR and the other two joined in. I think it's pretty badass at the age of sixteen to be able to walk into school on Monday after having crawled under barbed wire, scaled massive walls and rolled through the mud. I think if I had OCR as a teenager, things may have been a little different for me. Regardless, its always nice to talk to the next generation of OCR athletes. It's a reminder that this sport is still so young and we haven't really seen that next generation of athletes yet. As I walked around the venue running into friends I hadn't seen in a while or just sitting back and people watching, it's a reminder that when you block out all the noise and distraction this sport stands on the shoulders of community. Without community, this sport wouldn't thrive, it wouldn't exist. Instead, as race companies get bigger every year the community becomes bigger. In my opinion, it's always a nice reminder at every race to sit back and observe the community in action. Lastly, I had the opportunity to chat with Course Director Woody Peters. If you have the opportunity to volunteer on the build team and work alongside, Woody do it. After speaking with him there are many words to describe him: Passionate, kind, caring, salt of the earth, the list goes on and on. Woody  doesn't have to do what he does, but he wants to because he loves what he does. His goal at every race is to design a course that is fun, challenging and safe. You meet Woody once, you have a friend for life. In my opinion Woody is the definition of what the OCR community is about.

It's so easy to be critical of the larger race companies like Spartan and Tough Mudder. Both are flawed in their own ways, but I do think they are working to get things right. Aside from the parking, I had a wonderful experience at this race. The volunteers were fantastic, welcoming, positive and upbeat from check in to obstacles to the finish line and everywhere in between. The venue was perfect and the community was alive and well.

Spartan returns to the 508 International for their Sprint/Super weekend in August. I know I'll be there and I hope to see you there as well. This author is part of the Mud Run Crew and received a free race entry in return for an independent review. All opinions are those of the author and were not influenced by the race sponsor or Mud Run Guide.
By Alexis Haddad|2019-05-23T12:07:20-04:00May 27th, 2019|Race Recap|0 Comments