On May 18th, Tough Mudder kicked off their Toughest series in Coatesville, PA. Located an hour outside of Philadelphia, the first Toughest race of the series was held at Plantation Field which has beautiful lush green rolling hills and plenty of trails … for horses. Yes, you read right. These trails are for horses and there is a dirt track for equestrian events as well.

Tough Mudder changed the format this year. In years past, Toughest was 8 hours beginning at midnight and ending at 8 am. This year the event started at 8 pm and went until 8 am. Adding that extra four hours was a game changer from the gear required (tents/put crews/wet suits etc) to qualification mileage for Worlds (35 for women 40 for men) and everything in between.

The course was a standard five-mile loop with 20 obstacles, with the first lap being an obstacle-free lap, also known as the “sprint” lap. I found that having this sprint lap helped for two reasons. First, I didn’t need to pit after lap one, as I was running without a wetsuit, and second, it helped me refine my obstacle strategy.  Much like WTM 2018, the pit area was part of the course. For those who wanted a quick pit, you had the ability to pull off, pit, and finish your loop. Those who wanted to take a bit longer to pit, it was recommended to complete the lap you were on, then head back to the pit. I did both during the race, taking a long pit after lap two, then quick pit after lap three. 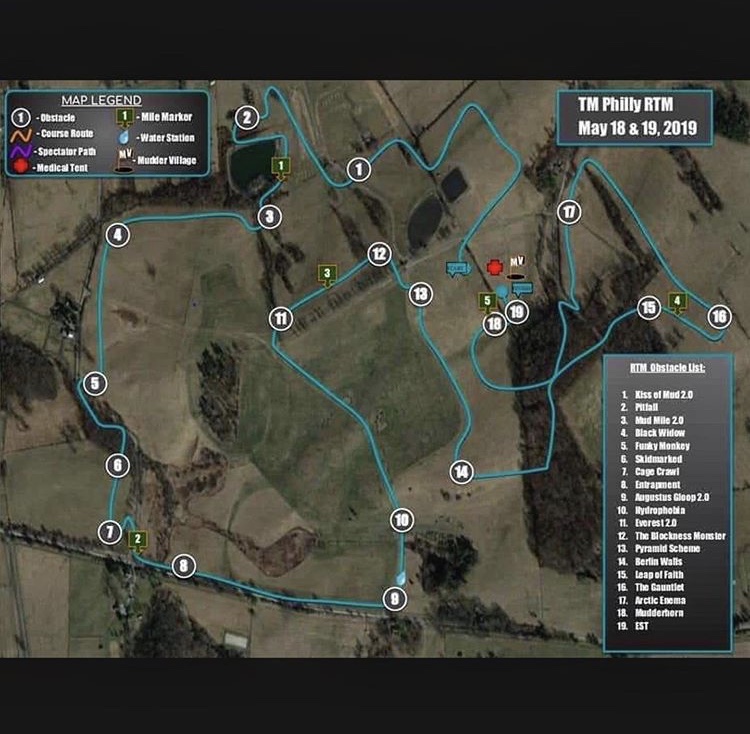 The way the obstacles were laid out was great. Tough Mudder usually lives up to the name and the first three obstacles were all mud. They got you wet and muddy right out of the gate. There weren’t just some patches of mud in Kiss of Mud or Mud Pit. Nope, there were places I never knew I could find mud on my body post-race. I honestly thought I had seen and cleaned it all, until now. It also took about four washes of my clothing to get all the mud out. So job well done Tough Mudder, I wanted mud and I got it. 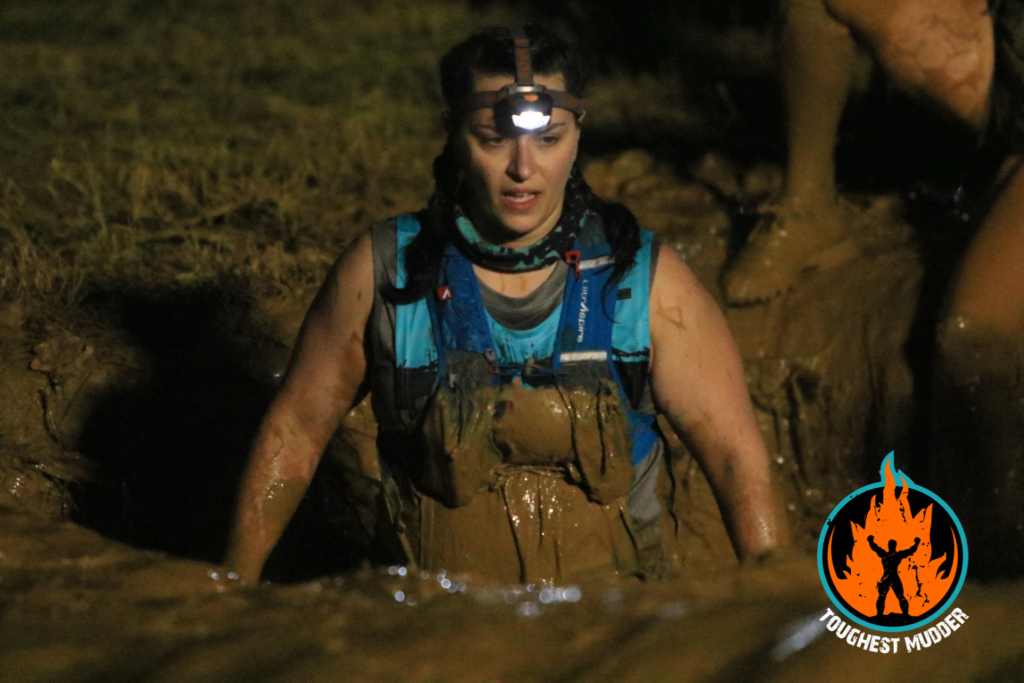 “Mud, mud I love mud, I'm absolutely positively wild about mud, I can't go around it I have to go through it, beautiful fabulous super duper mud!”

All the mud obstacles were at the beginning and out of the way. You then moved into various rig and climbing obstacles. As someone who excels in climbing/crawling/swimming, I was happy about this. I really enjoyed Black Widow and while I always had to hit the penalty loop at Funky Monkey I welcomed it as I knew I’d take a dip in the water and get some of the mud off. As a racer, you could tell there was a lot of thought put into the placing of obstacles as it was a nice combination of climbing/water/rigs dispersed throughout the course. There was a short stretch that put you into the woods for a little bit which was a nice break and allowed you to warm up before hitting a few more water obstacles and artic enema. As the night wore on, the biggest challenge after completing an obstacle was climbing down the other side simply because it’s dark, wet, muddy and you’re exhausted (Everest, Skidmarked, Augustus Gloop etc).

Kudos to the race director for putting Mudder Horn as the second to last obstacle smack in the festival area. I was really excited about that obstacle. Doing it once is no problem, but doing it multiple times is a whole other ball of wax. I can see why many opted to use their golden bands to skip that one. I want to thank those mudders who stayed and talked my teammate through this obstacle. She isn’t someone who loves heights and she wasn’t going to listen to me because in her words, “this probably takes the cake for the dumbest sh**t I’ve done and I’ve done five ironmans and swam with sharks!” She’s not wrong either. As expected Mudder Nation heard the call, or the seven words George Carlin always told us we could never say on the radio coming out of her mouth, and got her up and down that obstacle every.single.time. They all could have continued on since they had their own goals and race to run but they didn’t. They took those extra few minutes and it made a huge difference for my teammate. So again, thank you.

You may be wondering why the hell I decided to do Toughest. The short answer is, why not? I’m someone who gets destroyed in a 5k but does fairly well in a half marathon. So endurance races are the next logical step for me. However, it all started a year ago after supporting MRG’s very own Matt Willis at this event. Originally walking into the venue, I thought to myself, “Nope not for me, I’ll never be able to do this.” I honestly thought this was a race that only the fittest of the fit and the “serious athlete” did. Yes, there are those athletes at the race but the majority of the racers were everyday people just like me. As I watched people head to the starting corral, I’ve never seen so many people jazzed up. It was in June and fairly cool and a bit damp. These folks were heading out at midnight to run as many five mile loops as they could or wanted to. It didn’t take long for me to decide this was going to be my big race of the season.

Will I be back?

Oh hell yes! I had a blast and overcame a couple of obstacles that kept me awake at night. I’m looking at you, Arctic Enema and Electroshock Therapy. While I was well properly trained, did my research and came prepared for the race, there is so much more I can do for next year. The first is not to have a tibia stress fracture and be in a walking boot for two months over the winter. The cliff notes are I had about 12 weeks to train without limitation prior to the race and was cleared by sports medicine three weeks to the race. Second, I’d bring a pit crew. Having that support whether it’s feeding you, changing your clothes or giving you the support you need, these folks are invaluable. I was lucky enough to have a ton of friends and family sending text messages all night long. It was a nice emotional treat to come in check my phone and read these messages. Getting the photo of my four-day-old niece at the end saying congrats was pretty clutch.  I’d also bring a bit more gear. I had multiples of everything (except shoes) and plenty of fuel but when you think you have enough, bring even more. I’d include a tent, a swimrun suit (yes it’s better than a wetsuit) and a wagon to haul all my stuff out at the end for next year. Regarding the swimrun suit, the low of the night was 59 degrees, as someone who runs warm all the time I didn’t think I would be cold. What I forgot to factor in was the dampness from the wet obstacles. That damp almost ruined me, even after changing into dry clothes you had to put your bib back on which was soaked. So there goes being dry and warm for long. Aside from tired and having to drive back to MA on Sunday, I actually felt pretty good. I wasn’t as sore as I anticipated, but the fatigue in the following weeks was something I didn’t anticipate. It took about two weeks to the day to recover from the exhaustion and muscular fatigue. I did a lot of active recovery during that time but I was able to increase intensity right around day 15 post race. My advice to the regular everyday folks like myself: Make sure you give yourself time to recover. It's not a race to get back out and train that hard right after your race.

In the end, if someone asked me five years ago when I started OCR if I would ever do a 12-hour event I would have laughed in their face. That's the beauty of this sport, it's always evolving and challenging us. In some ways, OCR is like yoga. Yoga poses have a million variations for beginners to experts. The poses always evolve, you master one pose you try the next variation. With OCR, you may start with a shorter race then continue to build on that intensity whether it be distance, obstacles, etc. So now if someone were to ask if they should do a Toughest event, my response will easily be, “Why not?”

This author is part of the Mud Run Crew and received a free race entry in return for an independent review. All opinions are those of the author and were not influenced by the race sponsor or Mud Run Guide.
By Alexis Haddad|2019-06-26T11:26:18-04:00June 27th, 2019|Race Recap|0 Comments