On June 29th, 2019 Spartan Race returned to the Baltimore International Raceway for the annual D.C. Spartan Sprint. This venue is the perfect location for this race and it’s no surprise racers come back year after year.  Even though Spartan Race has used this venue before, they managed to improve the experience in several ways.

Spartan Race has done a great job improving the parking procedure.  Now that parking fees are charged at the time of registration there were no delays for cash payments or barcode scanning. This made parking much easier and much faster. It also helps that this venue has a generous parking area and easily accommodated all the racers. If you arrived early enough you had a brief walk from the parking area to the festival. Due to the shape of the parking area, Racers that arrived later in the day wound up having a substantially longer walk. They did have several port-a-potties at the mouth of the parking lot which was excellent for racers who had traveled a long distance and would have had a hard time waiting to get through registration. 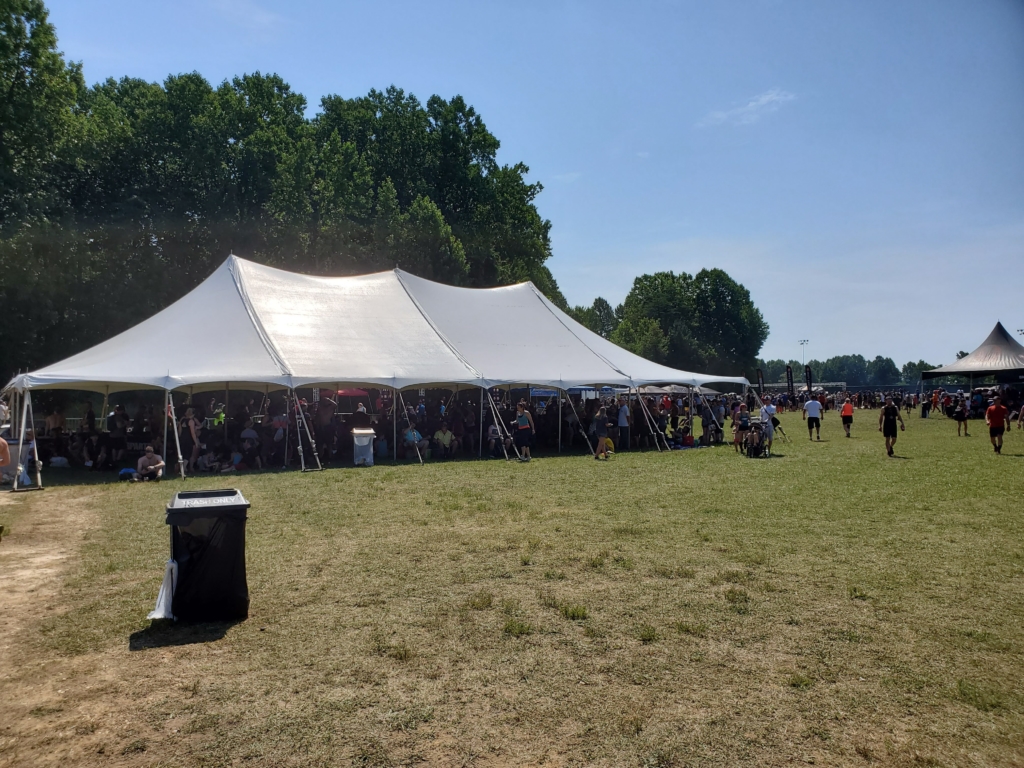 Registration was very close to the parking area and ran very smoothly. There were plenty of volunteers and there weren’t any significant wait times. The festival area was very nice because it was very large. The festival was framed on three sides by trees which made it possible to have a large but well-regulated festival area. Having the extra room in the festival area is nice for racers as it gives them plenty of space to do warm up runs and stretches without having to dodge other people. The spectators were able to escape the heat by sitting under some well-placed tents around the festival area. With no clouds in the sky, the temperature had broken 90 degrees by 11 in the morning and continued to rise throughout the day. These shady spots were an excellent addition by Spartan Race. While the festival area remained open and welcoming the merchandise area was another story. They arranged the entrance and exit to flow through the merchandise tent which made it very crowded and difficult to navigate.

The course was very familiar to anyone who has competed in this race before. Most of the course is trail running through the woods. There are a few portions that are open air, and that’s generally where you’d find the obstacles. The obstacles were very well laid out and were perfectly spaced apart. There was never a time where you were running for too long without an obstacle, and they also weren’t all stacked on top of each other. They also did make a decent number available to spectators: Hercules hoist, Z-Wall, Multi-Rig, Plate Drag, Monkey Bars, and Fire Jump were all visible from the festival area. If you took a short walk or followed the Kid’s course, you got to see the Spear throw and A-Frame. 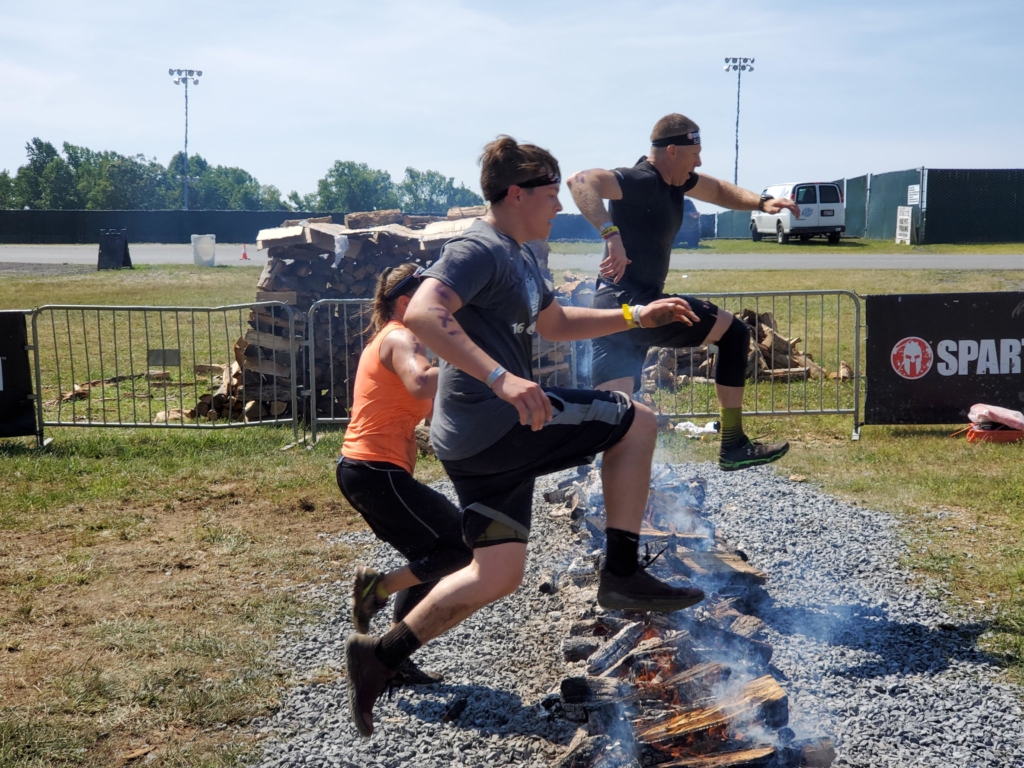 It’s a relatively short course and it didn’t have any huge climbs, but it did have was many rolling hills. Some of the climbs and descents were quite steep, but most of them are only a few hundred feet long. It’s just enough to get your legs burning and your heart rate up, but it doesn’t kill you like some of the mountain races. While the trails had plenty of technical terrain, most of the time you were able to run without paying too much attention to your footing. If you weren’t careful you might catch a root or rock, but the ground was mostly even and the trails well established. 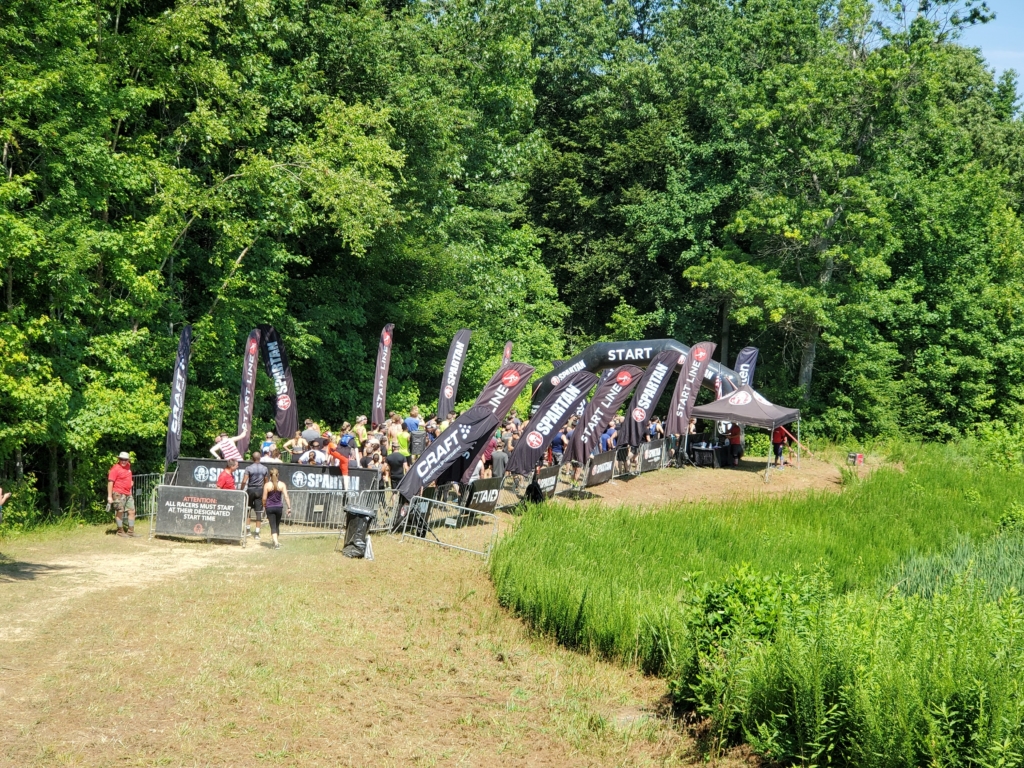 The start of the race sent racers straight into the forest

There wasn’t a lot of mud or water on the course. You hopped a couple of tiny streams and there was obviously water at the dunk wall, but otherwise, it was a dry course. They did have 4 water stations, which was great planning on their part. The evenly spaced water stations were key to keeping racers hydrated on such a hot weekend. They even had some water stations equipped with coolers of Liquid I.V. to replenish electrolytes lost through sweating.

The D.C. Spartan Sprint was a huge success. The course design was great and provided a good challenge without being overly difficult. The obstacle choices and placement were great and really helped make the race experience fun. Spartan did a really good job organizing everything from the course to the festival area. The event ran smoothly and was accommodating to both racers and spectators. There was some congestion at the merchandise area and at the bag checks. A few small changes to the layout could have eliminated the congestion. Otherwise, Spartan Race executed a great race. If you haven’t run it before, I definitely suggest you give it a shot!

This author is part of the Mud Run Crew and received a free race entry in return for an independent review. All opinions are those of the author and were not influenced by the race sponsor or Mud Run Guide.
By Ron Williamson|2019-07-08T12:37:46-04:00July 9th, 2019|Race Recap|1 Comment