I am OCR: Lucy White Editor: Mud Run Guide (https://www.facebook.com/groups/mudrunguide) is made up of nearly 1500 athletes of all ages, sexes, shapes, sizes, and physical conditioning. We're turning the spotlight on our MRG family with this new “I am OCR” series. If you'd like to tell your story, let us know!

I think everybody to some extent is or can be an “athlete”, BUT then there are those that are “born competitors”.  I have been a competitor/adrenaline junkie my whole life.  I eat, sleep, live, and breathe competition. The greatest compliment I was ever given was by a bodybuilding photographer and writer for Muscular Development Magazine, who was doing an interview with me. He told me, I was the first person he had ever met, that he could not ask “What is it that you do?,” but instead he had to ask, “What is it that you haven’t done? 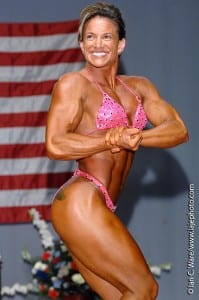 The majority of people are athletes in high school and possibly some go onto play college, which I did, BUT I’m going to be 40 this year and I’m STILL GOING, and will until I cross my “Finish Line”, which I will explain at the end.  Everything I’ve done, including my career, has had athleticism surrounding it. I was a Search and Rescue Swimmer in the USN, playing professional 2-man sand volleyball on the Bud Light Tour traveling on the weekends.  I also have experienced that true runner’s “high” as a marathoner until I blew both of my knees out and had to have surgery, but that’s what happens when you’re pushing 20 miles a day (100 miles a week).  I needed to give my body a break, so I decided to follow in my brother’s footsteps and give bodybuilding a try. (Some break huh?)  I did my first show in 1999 and from that point forward I became a National Bodybuilding competitor till 2007, taking my final title as Mrs. USA.   My bodybuilding career ended when my brother was killed in 2006. I buried him the exact weekend I was to accept my Pro Card. I finished one more year, just like a machine going through the motions but I couldn’t go on without him.  I never stepped back on stage after that. That chapter of my life was done. I tried staying in the gym but couldn’t. I just didn’t feel it anymore. That part of me had died. What do I do now???

I developed an inverted hernia, underwent surgery being cut up open hip-to-hip twice, within a year apart.  I couldn’t exercise for 2 years. It was at that point, I had to do something. I had to find ME AGAIN!!! 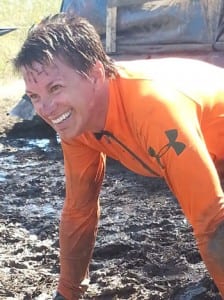 It’s true…OBSTACLES are put in your way to see if what you want is really worth fighting for! I completed 15 races after that. I started looking for longer ones, harder ones that required more endurance. I completed my first 50K in 6 hrs. and now, for this year, I’m already registered for a couple 50K trail runs, a 50 mile run, and a 64 mile trail run. I went from just regular races to ULTRA!!  I’m also pre-registered for The World’s Toughest Mudder in November 2014.

KNOW YOUR LIMITS…. THEN DESTROY THEM!! My greatest pleasure in life is doing what people say “I cannot do”.

In my training, the one thing that has kept me going is DERMINATION.  I believe you find that when you push your limits and force yourself to step “outside” the box of your comfort zone and your only option is to keep going or quit. Quitting is not in my vocabulary.  I will not just set an example but be the example for my son, my husband, and anyone that knows me. I hope that I can be that little bit of inspiration, that kept someone else from giving up.  NEVER, NEVER, NEVER QUIT!!

My husband was the one that really opened my eyes this past year, when he said to me, “Lucy, why can’t you just do something one time and go on to something else? You’re such an Extremist.” He caught me off guard. I didn’t have an answer for that. No one had ever called me that or said that to me before. LOL.  I’ve been told I was obsessed, which I feel is just a word the lazy use to describe the dedicated, but Extremist?….Okay. 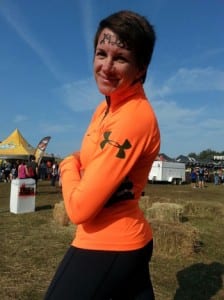 That word “Extremist” stayed in my head for a couple of months, until it finally hit me….I had the answer.  “I HAVE NO FINISH LINE”.  It doesn’t matter how many races I do or how long they are. I will always feel incomplete after losing my brother (Sam). He took half of me with him when he left. I accept this. I don’t expect to feel any other way. So with this, I guess “life” is my race now. I will keep going and training and trying to be better than the person I was yesterday.  I am a COMPETITOR and will be until I meet my brother, and cross my Finish Line.

THROW ME TO THE WOLVES AND I WILL RETURN LEADING THE PACK!! AROO, AROO, AROO!!