I AM OCR: Catherine Williams Like many people, my weight issues started when I was young.  I was a chubby child and when I entered school, my weight problems persisted.  All through my school years I longed to be “skinny” like other girls.  Instead, I was curvy except for the six months my sophomore year of high school when I starved myself to fit into a prom dress.  As soon as prom was over, I gained the weight back.  Even though I played some sports in high school, I was never able to maintain any “diet” I ever tried and my weight fluctuated with the latest fad diet.  In college, I gained the freshman 15 that turned into the college 30.  After I graduated from college, I married a man that “loved me just the way I was”.  That provided zero motivation for me to shed any excess weight.

It wasn’t until I entered into law school that my weight completely spiraled out of control.  My first year of law school (and first year of marriage), I gained an additional 30 pounds.  Between the enormous stress, late night eating, and complete lack of exercise I gained the weight easily.  By the time I graduated law school, I weighed 265 pounds.  During this time, I started to convince myself that I wasn’t THAT overweight.  That I didn’t have a serious weight problem – that I wasn’t morbidly obese.   I convinced myself that I was just a curvy lady and focused on my intellect, rather than my outward appearance. 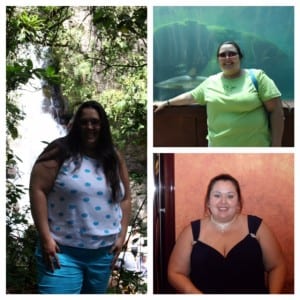 Over the next 14 years, my weight continued to fluctuate as I continued to try fad diet after fad diet.  Occasionally, I would lose as much as 30 pounds, but could never lose anymore.  Then once I became discouraged, I would quickly regain the weight.  It wasn’t until the end of my marriage – a 15 year relationship – that I really hit rock bottom.  I went on a trip to Puerto Rico for my birthday and when I returned and started looking at the photographs from the trip, I realized that I did not even recognize the girl in those photographs.  The girl in the photographs was morbidly obese and very sad.  There was a smile on my face, but I was in a lot of pain. I do not know exactly how high my weight got because I stopped weighing myself.  However, I was wearing size 22-24 pants and size 2x or 3x shirts.  I could no longer deny how out of control I had become.  Instead of taking positive action, I continued to eat as a way of comforting myself and drowning my sadness.

It wasn’t until I met someone a few years after my divorce that I again turned my attention to losing weight.  His name was Tommy.  He too, loved me just the way I was, but was concerned about my health and strain I was putting on my body by carrying so much excess weight.  He encouraged me to exercise and we would often exercise together.  However, I was never able to sustain any meaningful weight loss because I was never able to maintain the restrictive diets that I thought were necessary to achieve weight loss.

In 2012, Tommy proposed marriage to me and it gave me the motivation I needed to try to lose weight again.  I may have been a chubby child, an overweight adolescent, and an obese adult, but I didn’t want to be a fat bride.  My whole life, people have always told me that I had a pretty face.  When I got married, I wanted to be more than just a pretty face.  This time, I chose the weight watchers program to help me lose weight.  I exercised on the treadmill and elliptical machines and took the occasional group fitness class.  I lost the same 30 pounds again, but was still so far from where I wanted to be.

This was when I was introduced to The Compound by a friend.  The Compound is a certified Spartan Group Exercise (SGX) facility.  The philosophy behind SGX training is to build better humans by creating a supportive group atmosphere of positivity, healthy living, awareness, and fitness.  The Compound, my coaches, and my Compound family have completely changed my life.  To say I was terrified when I went to my first class is an understatement.  I felt like I was not fit enough to even take the class.  We would run as a warm-up before class and I was unable to even run 1/3 of a mile without stopping and gasping for breath.  At this point, it would have been easy for me to give up like I have so many times before.  However, my coaches (Tanya Bickham and Matthew Waller) worked with me, encouraged me, and even modified exercises for me when necessary.  They also taught me about clean eating and using food as a fuel for my body.  They have shown me that I don’t need to starve myself (and shouldn’t) to lose weight.  Now I have lost an additional 30 pounds and I am stronger and more fit than I have ever been in my life. 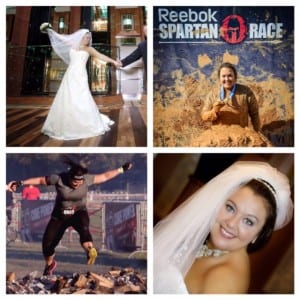 My coaches have also introduced me to something that I never knew existed, but couldn’t imagine my life without now: Obstacle Course Racing.  In the year that I have been training at The Compound, I have completed a Tough Mudder and two Spartan Sprints.  I have also completed two half-marathons, a 15k road race, several 10k road races, and many 5k road races.  Although running is not a passion of mine, it is great training for the obstacle course racing.  The best thing about Obstacle Course Racing is that it provides a challenge for everyone from elite racers, to athletes in training (like me), to those just starting out.  It fosters team work and encourages us to become better humans.  I never believed in a million years that I would be able to complete a Tough Mudder or a Spartan race.  I never knew how strong I was, physically or mentally, until I started obstacle course racing.  I completely underestimated my strength, both physically and mentally.  I still have some excess weight that I want to lose, but I no longer use my weight as an excuse to keep me from doing things I enjoy and living life to its absolute fullest.  I will turn 40 years old this year and I have decided that as a way to commemorate my 40 years on this earth, this year I will run 40 different road races, obstacle course races, mud runs, and at least full one marathon.  I am finally realizing how fabulous 40 can be!!