I AM OCR: Heather Blevens I was married with a shotgun wedding not really knowing the man I married for about five years, I wish I could say it was nice – but it wasn't. My ex-husband was abusive – not physically, but mentally. I was told I was fat, crazy, and all together worthless. He even had his friends tell me these things, so I was a mess, I believed every word of it. I stayed home with my two boys, cleaned everything for him and drove the boys around to whatever he wanted them to do at that time. I was a single mother in many ways. Even when he was deployed or TDY, He left rules for me, how to act, how to dress, and to make it worse he would check up on me nonstop.

As time went on we moved many times, never spending more than a year and a half at one place. Though I can say I have lived in Hawaii, Kansas, and Georgia, it was not really that fun when he was around, cause all the negative words and thoughts he brought into the room. I was ordered to work a full time job, pay for everything kid related, if anyone is/was in the military they know a spouse can not get a “real” job because well they will be moving soon. I had many dead end jobs, though I was good at them, they did not pay much, and the hours sucked for all the hard work. Normally I would not complain, but with the 40+  hours a week, I was to have the house spotless at all time, and all laundry done, as if it was a model home. With two boys under five that was not easy. But I did it with a smile always wanting just a thank you or a “good job”. It never came. Instead, I was told over and over that I was fat and that I could do nothing right.

I ran every night with the dog for miles because I was told I was fat. My husky could go for miles on end, so did I. Eating close to nothing and daily p90x workouts made me really skinny in reality, but I never got one compliment. My ex-husband picked out a trainer to help me ‘slim down', and he would talk about training for Tough Mudder and Warrior Dash with his wife – what I would give for that type of encouragement & support from my spouse. I wanted to try it, it looked fun, get all messy and running ( I was good at that). So, after a week I got the courage to ask if I could train with them, and maybe even drive to the race with them, since I didn't know the area. He turned and looked me up and down and told me I was not ready and there was no way I would ever be ready to do a mud run, I was just not the type. I was too slow and weak and it was pointless for me to even pay for the parking much less to get into the race. I was heart broken and took the words to heart – just one more thing that a male figure told me I sucked at.

About a year later in Georgia I saw more races still kinda wanted to try it but I thought I couldn't do them, cause I was too weak and slow. I got the courage to ask my ex-husband if I could at least try a small mud run – that was a mistake – I never heard the end of how stupid of an idea that was, and I started to let go of that dream. After all I was a married girl and there would be half naked girls and guys there, I was a mom and that meant I would have to give up a Saturday morning that I should be at home with the boys. It was just too late in life for me, I missed my “chance” to do the things I wanted and have some fun. 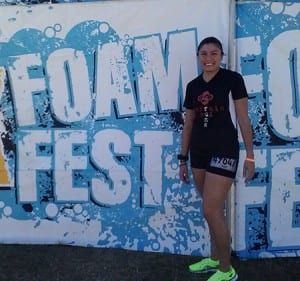 After I had a mini eye opener I left him, I packed my son, some clothes and the cat and drove to Arizona to live with me Mom and her family. I was 2000 miles away but he still controlled me. My mom was at a loss on what to do with me, I was a mess, cried non-stop and couldn't do anything. I had always the strong one in the family, whenever someone needed something they called me to help them, now I could not even get up out of bed. I was broken, and it scared everyone. After what seemed like an eternity, I found a job and started putting my life back together. There, I met Chris Blevins who started to show some interest in me, slowly helping me realize that I was not fat and it was encouraging that someone thought I wasn't bad looking either.

My mom started seeing the “old me” and sat me down to ask if there was something I wanted to do, anything that I was not “allowed” to do while I was with my controlling ex-husband. I took all night thinking, in the morning I told her I really wanted to do a mud run, even if I couldn't finish at least I could start it. We got online that moment and found out that Warrior Dash would be in the area in about a month or so. I said okay I am going to do it…. So excited and scared after all this was against the “rules”. 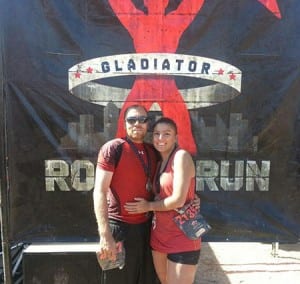 I asked Chris if he wanted to go with me and try it, hoping he would not laugh in my face and tell how stupid it was, but I was going to do it alone, I was so nervous and shy there was no way I could go alone. Chris said yes, no questions, shocked the hell out of me, no “well you're too weak” or “why”, just “okay – lets go!” On race day he even stopped and got a water proof camera for me, since I scrap book a lot, it was truly my day.

During the race I ran, but it was more than running it was running away from who I was told I was, the girl that I should be by seemingly everyone else standards, to the new girl at the finish line, the girl I wanted to be, the mom that is not going to wear the dress and heels to pick up my son, but will be there climbing the tree, running in the mud, the free girl.

Though the obstacles were hard, I had Chris to help me and offer a hand to get me over the cargo net, not laugh at the fact that I am scared to death of anything higher than me, and still not letting me quit cause I was scared. He gently pushed me to try all the obstacles – fail or not it would be tried. That  day I was free, although I heard all those negative voices in my head at every obstacle but I didn't let it stop me from trying. Every obstacle I cleared, those hateful words got quiter, fading farther and farther away. Just looking around, I realized there were other moms there,  guys enjoying the event with girlfriends and wives. I was not alone at all, I was among people that were trying just like me. Offering a hand when needed, and taking mine when I offered it. It was the start of a new life and a journey to a new me, the real me. 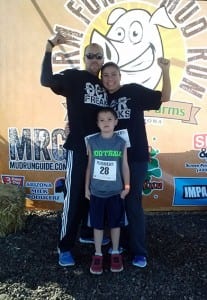 It was OCR that showed me I am Heather and I can run forever; more importantly, I have someone to help me. There are people out there to help me and get over any obstacle. We have grown into mud runners now. Chris loved it just as much as I did and we started a hobby that would take us to new places and new people. With more than twenty runs under our belt, we became a good little team, a couple of mud loving people. I still get nervous before the race, still hear the (now little) voices that I cant do it, but they can shut up now cause I have my teammate next to me, and now friends like Brett, Jerry, Louis, and others next me ready to go and there to help when needed even if its just the little push I need to get over the cargo net and to monkey bars.

I am closer to the girl I want to be and with every finishing picture I want to say “Ha FU old life see I can do it!”

If I can change my life, so can you. AROO!