The Fitathlon Challenge recently brought their 5k fitness based race to Massachusetts. The event focuses on cardiovascular endurance and incorporates it in many of their obstacles. As a playful jab at the other OCR's, they promote their race as having “no mud, water, fire or electrocution – just sweat.” – a boast that wasn't entirely accurate as you'll see later. During the registration process, participants selected their wave time based on their fitness level. The choices included newbie, beginner, challenger, competitor, and super competitor. Many of the obstacles were adjusted, either by distance or repetitions, thereby allowing people of all athletic abilities to participate. The race was untimed, but the super competitor division did include monetary payouts to the top three men and women athletes. No waiting weeks or months for your money either. All the winners received their cash payouts on the spot. 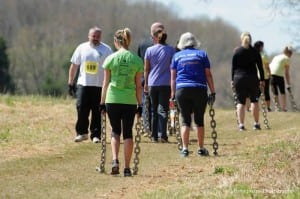 Parking/Location: The event was held at Kimball Farms in Haverhill, MA, the sister location of Amesbury Sports Park. The working farm included some hill inclines/declines, wooded trails and expansive open fields; the perfect combination for an obstacle course race! For a $10 fee, parking was conveniently located on the grass near the venue. There was no need to board a bus and get shuttled to the starting line. The parking was also close enough that you could store your belongings in your car, saving $5 for the bag check.

Registration: I decided to volunteer for the event and arrived earlier than most of the runners, so I can't really comment on how the registration process worked later in the day. Along with free parking, lunch and race entry, volunteers also received a free t-shirt at the registration tent. Participants that wanted a shirt were required to pay an additional $10 during registration, a practice that I'm not a fan of. As far as the volunteering aspect, I found it to be fairly disorganized. We were required to report to the registration table before 8:30 AM and, prior to the event, all volunteers selected where they wanted to work for the day via an online signup form. However, after arriving at the event, we were instructed to aimlessly hang around until the race director had time to appoint us a position (probably a half hour). When we finally got together, we were given jobs on the spot with no regard to what we had previously selected. Why did we fill out the online form?? I really can't complain to much though because I was assigned to the kid's course and once the kid's race was over, I was moved to one of the more rewarding positions – hanging the finishing medals around the necks of runners. 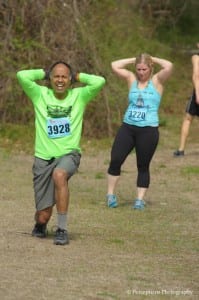 Course: Before officially passing through the starting gate, the first “obstacle” involved completing four calisthenics exercises – squats, pushups, crunches and squat thrust. The number of repetitions for each exercise was based on the ability level chosen by each participant (20 for newbies, 30 for beginners, 40 for challengers and 50 for competitors) Up next was a walking lunge uphill for what seemed like an eternity. It probably ranged between 50-100 yards. Between the exercises and the lunges, my legs were on fire and I was already breathing heavy. Coming into the race, I wasn't sure how difficult this race would be but within five minutes, I quickly realized this truly would be a challenge. After heading up to the top of the hill, the course flattened out for a bit as we ran along the edge of the vast open field. The course route essentially zigzagged across the rolling field and we encountered obstacles including 5′ walls, three 8′ steep angled walls with assist ropes and a tightly packed set of 40 saw horses of various heights used for over/unders. 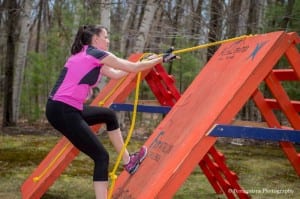 We continued across the field to the weighted wheelbarrow push and backpedalling chain pull that both extended a certain distance determined by your ability level. In between were four horizontal cargo net crawls. A set of agility exercises were next including balance beams, high knees, tunnel crawls and slalom poles that lead to the tire flips (2 for newbies, 4 for beginners, 6 for challengers and 8 for competitors). A weighted ruck sack directed runners down the hill into the wooded area surrounding the farm. The path diverged, sending newbies and beginners one way and challengers and competitors another. The narrow, remote trail for challengers/competitors lead us under tree limbs and through a few thick muddy areas that were impossible to avoid. With the promise of no mud, I didn't bring spare shoes or socks. Lesson learned. Never trust an obstacle course race! The course continued to a 30 second rope slam and down a fairly steep hill to a pair of traverse walls. Over the monkey bars and a quick sprint to the finish line to receive your medal.They also offered water, Gatorade and bananas to all runners completing the course. 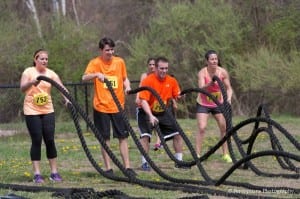 After Party: Not much of an after party. There were a few tents setup with your typical food choices, merchandise and beer options. No free beer ticket though 🙁 A DJ was playing high energy tunes throughout the day and all spectators were allowed to enjoy the event free of charge. Even though it cost an additional $10, the shirts were good looking and nice quality. Professional photographers were also taking high quality action shots through the course and offered them a few days after the event for a fee.

Conclusion: Overall, for a small and growing event, Fitathlon put on a fun and challenging course. I was impressed with their unique approach to tailoring the race based on an athlete's fitness level. It allowed all participants an opportunity to compete whether they were new to the sport or a season veteran. Originally, I wasn't expecting much but was pleasantly surprised by the course layout and physical nature of the event. You know it was a challenging event when your legs are still sore a few days later! The Fitathlon Challenge is a nice addition to the ever-growing landscape of obstacle course racing.

Did you do the Massachusetts Fitathlon Challenge? Share your own rating & review about the event today!