Good thing I checked my junk mail inbox, as a last minute reminder prior to the race advised everyone that there would be a $7.00 fee to enter the Metropark where the event was being held.
I arrived as the first competitor to compete, and the parking was very near to the event start/registration. They were relatively unorganized at the registration table, and did not ask me for my ID or to sign the waiver that I had brought/signed beforehand. (Hello potential lawsuit) Also, they handed me a participant shirt for entering that turned out to be one of the crew's “Team Member” shirts, and rubber bracelet emblazoned with the race name. 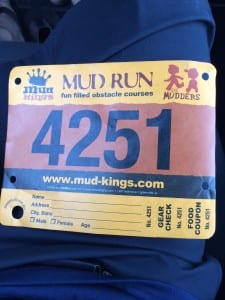 The race start was also a little unorganized, as the group began to congregate by the start area. Someone was trying to give instructions near the front, and we could not hear him from where we were; but it ended up being the crew allowing about 15-20 runners to begin approximately every 30 seconds. The crowd was a mixed bag of children and adults.

The overall course itself was touted as “Mud Kings”, but I feel I could get muddier on my training runs! We began by wading through a large/rectangular “pool” before running over a small mound of dry dirt. The course then progressed to some other inflatable obstacles, and some fixed ones. The course itself was relatively flat with only one decent hill to ascend, and then a watered tarp to slide down upon the return. A 6′ wall, and some angles walls with ropes were present. To that point, nothing too challenging. We then crawled through a few tubes, again with dry dirt in them, and small dirt piles to traverse prior to them.

The 2nd to last obstacle posed the only real challenge on the course (intended or not). I ended up referring to this monstrosity as the “bouncy castle of death”. The obstacle was an inflatable wall approximately 12-14′ high. 2 thin/plastic ropes adorned this “marvel of engineering”. With the rope too thin, and the inflatable pegs protruding from the wall, it made climbing this thing like fighting a bosu ball with arms. Somehow I was able to make my way to the top of this unstable structure, only to realize that I had to rappel down the other side akin to what I had in climbing it just a moment prior. However, on the decent, this thin plastic rope got the better of me, and I ended up slipping down the rope for about 6-7′ of the distance. After some pretty mean rope burns on my hands, I completed it. On to the final obstacle of the day. 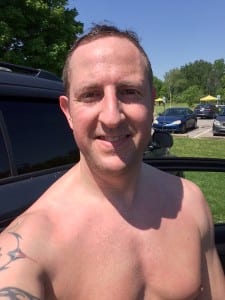 As with most of the course, this was a monstrous inflatable slide to the finish. However, upon making it to the last obstacle, I was informed that the generator to inflate it had run out of gas; and we had to wait about 10 minutes for it to inflate more. After scrambling to the top of this thing, I had a near vertical drop to another section of the slide that sent me flying onto a flat inflatable section of the slide. Not sure if I was supposed to slide onto this thing, or if it was still under-inflated; but it didn't seem to go as designed. From there, it was a step into a large inflatable pool to rinse/cool off.

Being that it was fairly warm that day, it was the best part of the race. I easily finished as the first adult competitor, despite starting behind most of them. Overall, the even seemed somewhat geared to a much younger crowd and their parents. For me, it helped me to become initiated into OCR; so I made the best of it, and it ended up being a solid workout for a first event. Difficult to say if I would enter it again next year, but it has now helped me to give all the other events something to compare to.