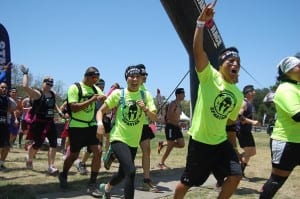 I had the privilege to head out from my south Texas abode to Monterey, CA for the Spartan Beast on June 6th. Please, allow me to take you with me through my experience from this weekend. I begin with waking up at 4am on race day. This is part of my normal routine so I can get moving around, have my stomach wake up and get some food in me before heading out with plenty of time to warm up, bag check and overall be ready for the race. Today was a little different as I went to look up my bib number and saw I had none. For some reason, I wasn't registered. So rather than take it in stride, I get my stuff and head out as fast as possible, completely forgetting all supplements (other than Gu Gels I packed the night before) as well as eating anything. After finally finding parking through the dense mountain fog in the near dark and being shuttled to the venue, I was able to use my season pass to do a race day registration for the Elite wave, got warmed up and ready for the start. 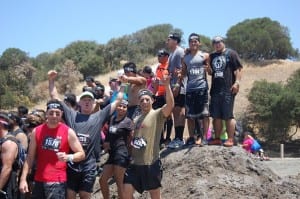 Knowing that we were going to be running up and down mountains, I decided to take a slower pace at the beginning of the race. I didn't want to burn out early. From what I saw, it was pretty much the mass consensus once we reached the first climb. I have to hand it to Dan. He managed to find every single track trail that had a steep grade and long distance to climb. Calves and quads were to be tested this day! After about 2.5 miles of running up and then back down that same mountain on the long trail, we make our first loop back through the festival area for the Rolling Mud and Monkey Net obstacles. This was my second time seeing this obstacle. I had completed it both days in its first incarnation in Miami when it was an inverted 45 degree angle of cargo net. I like the long and flat a little more because it’s not as punishing as it was when it was angled. We get through, hit the bell, and run back in to the mountains! 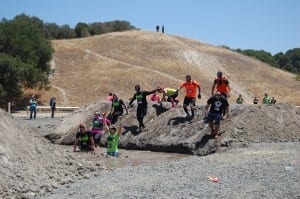 After more climbs, a sandbag carry, log hop, and rolling mud we get to everyone’s favorite obstacle, the Bucket brigade. (Yes, I can hear you groaning through the internet.) I arrived, filled up my bucket and made it to the top. I set it down for a quick recovery breather; no biggie, right? Until I was careless, double grabbed it on the bottom and spilled it. This was my first time ever spilling. I ran down the hill looking at everyone’s “Sorry, dude” faces as I did. This took me out of the top running. Up until then, I was in the top 20. Afterward, I dropped way behind. Now the race was all about catching up to where I was. 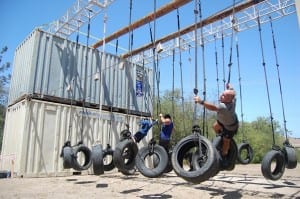 After this we came across “The Gamble”. This was introduced in Atlanta, and I really do enjoy the dynamic it introduces. The thing about the elite wave is we must all take the same gamble, for timing purposes. We had to go to the right in this race. Our track was a no trail scale climb on a mountain cliff. It was very precarious in terms of footing and solidity. The higher up we reached, the more the glaring realization came to me that if you dropped two feet to you left or right, you just fell to a catastrophic injury, and possible death. I wondered about the people racing later that wouldn't have the greatest balance or foot placement. At the top, there was even a rope to pull ourselves up with because we ended up having to finish it on the sheer side face of the cliff before getting back on level land. 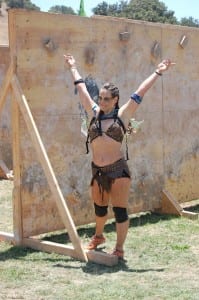 We had another obstacle group gap then came to a tire drag, barbed wire craw then the Demo Bag Carry. Now, this was a breaker for a lot of racers. This is actually where I was able to make quite a few passes as well. Think of the bags they use for the herculean hoist, then just fill them with (what felt like) 80-100lbs of rocks and dirt. We had to grab a bag, then go up a very long hill and wrap around to drop it off. The trick to this obstacle is to not hold on to it like any of the other carries you have ever done. Don’t hold the bag over your shoulder; don’t low or high grab it. Muscle it up to your shoulders. Rest it there and keep decent posture. This is where I and many other people started getting our first hard cramps. My lower quads, right above the knee-cap, were knocking on the door and I didn't want to let him in.

After getting to the bag drop, I jogged over to the 8-foot wall where my left calf promptly seized as soon as I jumped. I pulled myself over and landed on a limp. When asked if I was ok, I simply replied, “Lebroning”. Luckily there was a water station so I could hydrate and wash down another Roctane gel to alleviate the cramps. We swing around and hit another bevvy of obstacles. Another barbed wire crawl, slip wall, atlas stone and spear throw. I made the best spear throw I have ever made this day. I’m finally over 50% on my throws through all of my races! I run over to the Herculean Hoist where my legs prevented me from dropping down to use my body weight because the cramps would not let up. I muscle the bag up and back down then over the traverse wall. Then we hit the final mile. My legs were aching, cramping to the point where I could barely move them. There was another hill just to add more pain. I down my last gel to try and help, but it’s not doing anything.

Getting to the finish line we hit a couple new obstacles. The first is a tire swing where we had to traverse forward over four ropes with tires. No hitting the ground, no lateral movement, you must hit the bell. I loved this obstacle. My years of childhood prepared me for this. I wish it were longer, but I understand bottlenecking would be quite bad if they did. After the inverted wall, we went through the races final obstacle, The Gauntlet. It’s a bunch of tires hanging by ropes that you have to run through. Once crossing the finish line, I believe I grabbed four bananas and went to sit to get the cramps out of my legs so I could walk again.
After regaining my station, I was able to track down the race director, Dan Yotive for a few questions about the course.

Me: This was a great course. One would say it was almost malevolent in design. Was course difficulty something you focused specifically on, or was it the sheer virtue of the terrain?
DY: I absolutely wanted it to be harder than last year. We have a lot of repeats and they always want to see something different. TO be honest, I tried to make it flow a little bit better. I tried to go up the single tracks and down the fire because it’s less slippery to go up the single track. For the most part, we just try to improve. We made a lot of the obstacles a lot beefier, our atlas lift and herc hoist being a couple. A lot of the upper body obstacles are a lot heavier than last year.
Me: That second sand bag was, just, raw.
DY: Oh, the second sand bag is better.
Me: There are a couple new obstacles out here today, what brought those to fruition?
DY: The tire swing was something we've wanted to do for a while. It’s a full body workout because you’re trying to reach, swing and trying to stay balanced. It’s just something that really works you out at the end. There was no real specific athletic movement that we were trying to go for, we just want to bring something that they haven’t seen before to keep it fresh. (I should also say, the Fresh Prince theme was playing in the background during the interview.)
Me: The final obstacle, The Gauntlet, was that more to replace the Gladiators in a spiritual sense?
DY: Exactly. It still beats you up at the end, but you’re not going to get smacked in the face. It’s not going to make a first or second place issue which has happened in the past with the Gladiators. It’s a work in progress, but we tried to do something new for the finish.
Me: Being this is the second year at this venue, are you planning on returning next year?
DY: As far as I know, yes.
This was a great event. It was handled with Spartan Races signature, methodical organization and style.

Did you do the Monterey Spartan Beast? Share your own rating & review about the event today!