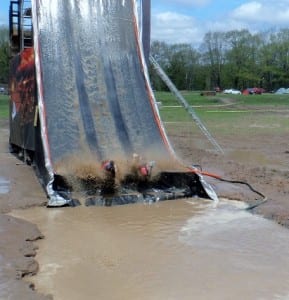 Off to Tweed, Ontario we go. The location for the Doomsday Race was at the Trudeau's Park Resort about 20 minutes north of Napanee on Stoco Lake. This is a beautiful setting with a breeze coming off the water to keep racers cool. I had spoken with the Race Director a few weeks prior and he had some concerns with the amount of rain that they had been having, but he felt that they could accommodate the racers but may need to change some of the parking areas. We found the location with ease, paid the $10.00 for parking and headed straight to registration. After handing in our waivers and passes we were given a t-shirt ticket and a beverage ticket to use in the participant area. The line-ups moved fairly quickly and overall the registration process was well organized and efficient. There was some difficulty with one of our team members using the Groupon for this event; however it was more a delay in getting the access code vs. race registration itself. We quickly scoped out the small vending area and picked up our Doomsday Race t-shirts. We were a bit disappointed that there was not more Doomsday SWAG, as they were offering cowboy hats and t-shirts with logos of vehicles and corporations, nothing related to sports, obstacles, racing or products thereof. There was a BBQ available for breakfast and lunch and the first heat was to commence at 1030 hrs. We joined into the starting corral at 1025 and were off racing at 1030 -right on time. The terrain was mostly flat and weaved through fields, forest and bogs. 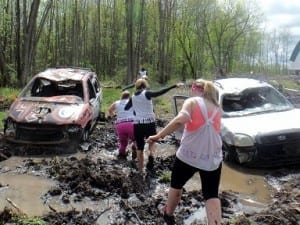 There were hay bales, climbing walls, mud pits and pipes, balance logs and a fantastic final slide that really shot you into the mud pit waiting at the end. During the initial heats there were bottle-necks at some obstacles and the trails were not well-marked. Volunteers were sporadic along the way and some racers got off track and had to double back to the original path. The race was approximately 6KMs and the finish line was in the main campground that allowed for families and spectators to take photos at the finish line. The children's race was one of the largest we had seen and seemed to be enjoyed by the kids. All finishers received an AWESOME Doomsday Dash medal.
PROS: convenient location, good layout, full facilities and overnight camping available on-site, music, family-friendly, non-timed event so our newest team members could get a feel for obstacle course racing with no pressure. 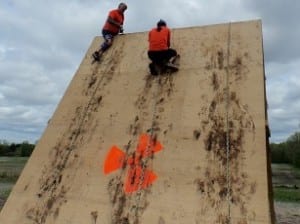 CONS: the food we had was average with a choice of beef, pork and turkey, the turkey was under cooked and lunch was between $5-$13.00 for one person, obstacles were average compared to most races and the terrain was woven through open fields that lasted 1-2KM before an obstacle -a bit dull if you are more into obstacles vs. running between them, the t-shirts are average -cotton, not wick-away and there are no hose-off or change areas (spoke with the Director afterwards and there were showers and change-rooms on the lower level, but signage was not clearly visible) and there were no photographers along the route.
Overall, this would be a good race for beginners or if you are looking for a basic camping/racing venue. I would only put this one at 2/5 with 5 being AWESOME and 1 being FAIR.

Did you do the Doomsday Dash? Share your own rating & review about the event today!