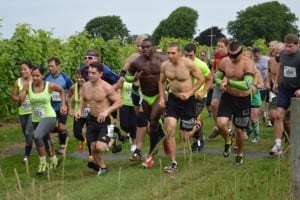 The Samurai Sprint Mud Run recently held their inaugural event in New England, boasting a combination of outdoor elements and challenging obstacles spread over a 5k course. In an attempt to appeal to runners of all abilities, they also offered a relay race option in which teams compete together in the running aspect of the race, while a few select team members tackle the more demanding obstacles. With the ever growing popularity of the sport, it is becoming more and more difficult for new races to establish a presence. Virtually every weekend there are a handful of races to choose from. Usually I wait for an event to hold their first race before committing my hard earned money however, with the promise of challenging obstacles, the unique venue and the cool samurai theme, I decided to give it a shot.
Parking/Venue: The event was held at the Westport Rivers Winery in Westport, Massachusetts. Intially, the vineyard seemed an interesting choice for a mud run; would the sophistication of a winery blend with the mud and craziness of an obstacle course race? I was curious to see how much access the race director would have: Could they dig trenches? Would there be mud?

The picturesque vineyard had an open area that was transformed into the event space. The layout offered scenic views of the vineyard frmo the few picnic tables, and a few vendors had tents set up. Spectator access to the course was limited to the starting and finishing areas, making it difficult to get any quality photos of the obstacles. For a reasonable $5, parking was located on-site, a few steps from the venue. There was not a bag check available but with the car being so close by, it was easy enough to store your belongings there 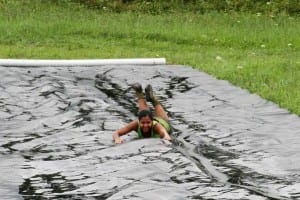 Registration: The registration tables were setup as you entered the venue with a handful of volunteers handling the process. Unfortunately, communication prior to the event was somewhat limited. We received one reminder email with some pertinent information and another one explaining the guidelines of the venue. Unlike other events, there was no link to a waiver form that could have alleviated some of the congestion at the registration tables. After presenting you ID, you were given your race packet, including bib, shoe timer and a nice quality cotton shirt with a well-designed Samurai Sprint logo. The entire process took about 10-15 minutes.
Course: We were set to run the first wave of the day at 9:30 but were delayed by about 10 minutes as they rushed to get the volunteers in position. The relatively flat course consisted of mostly dirt roads and grass fields surrounding the vineyard while also incorporating a few rolling hills. The course was marked with small arrow signs that were difficult to notice in some areas causing some confusion. There was one unmanned water station with cups of water but no barrel or trash bag to throw the cups in. 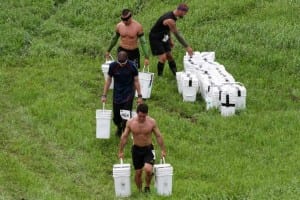 The race started alongside the rows and rows of grapevines towards the first obstacle, a seemingly innocent stretch of mud. However, the thick, knee-high mud pit swallowed more than a few runner's shoes. One guy in our wave was unable to find his shoe and decided to complete the entire race with only one! We headed down a dirt path toward the over/unders and continued to the tire flip (four up and four back). But, with only three tires available, there was an immediate logjam. Since we were the first wave, the wait wasn't too long but I imagine as the day progressed, this obstacle probably created a substantial bottleneck. The problem could easily be remedied for the next event by at least doubling the amount of tires at the station. We also encountered a standard section of monkey bars and an 8′ wall before reaching Hangover, a wall obstacle where racers, using only their fingertips, needed to shimmy across a long horizontal hand-hold plank that had a slight incline as you moved along.

Across the balance beams and down to my favorite obstacle of the day, the Ninja Warrior inspired Reverse Staircase. The obstacle was essentially a twist on the incline/decline monkey bars, using a staircase designed structure comprised of 2×4 horizontal planks where athletes needed to ascend on one end, transition to the other side and descend down the other side.

Fun obstacle that I nearly completed if I didn't slip on the way down. Can't wait to try it again! Next up was the box jumps that also followed the staircase design, 5 jumps up and 4 down. Up next was the traverse wall but with the lack of mud thus far in the race it was fairly easy to conquer. 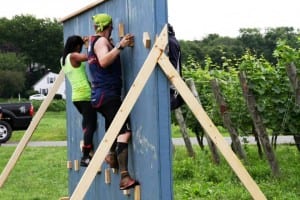 No muddy hands or slippery wooden blocks to contend with. We continued across the vineyard down to the knotted rope climb, over the incline wall and towards the rope traverse suspended over a small pond. The structure at the end of the climb was a little bit higher than the starting point which, along with the slack on the rope, increased the difficulty of the obstacle. With only three ropes and due to the technical nature of the obstacle and the time it takes to complete, I imagine this obstacle also had the potential for some serious backups later in the day. After a muddy cargo net crawl, we approached the weighted bucket carry (two buckets for guys, one for girls) up a hilly incline around a cone and then back down. This one really challenged your grip and upper body strength! The course finished up with a quick tire drill and what is quickly becoming a staple at every event, a slip ‘n' slide. The slide had some dry spots and wasn't located on a very steep section of the hill, making for a slow ride down. A quick sprint to the finish to collect our medal. The nicely designed medal was dangling from a solid black lanyard but was fairly small. I would suggest bumping it up a couple inches next year. A few drink sponsors were also set up at the finish offering free protein and sports drinks. 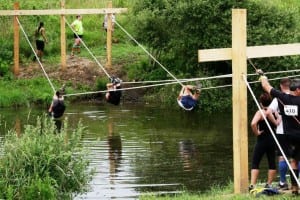 Post Race: Samurai Sprint created a small kid’s course that was available after the final wave of the day free of charge. A rock climbing tower was also set up to keep the kids entertained. The quaint festival area included a few vendor tents promoting their gym and cross-fit facilities. No free beer ticket but a local brewery was offering a few draft selections for $6 each. The reasonably priced food choices included your typical fare at these events: burgers, hot dogs, etc. A reggae band entertained the crowds throughout the day.

Prior to the race, we were notified that no changing facility would be available. It was suggested that the port-a-potties be used for this purpose. If you've ever ventured into a port-a-potty at these events, you realize that changing in them is not an option. I've become rather adept at contorting under a towel so the lack of changing tent didn't really bother me. However, I did reach out to Samurai Sprint a day before the event to ensure that at least a wash off area would be available and was told that there would be. After circling the festival area a few times trying to locate it, I spoke with someone from the race and was informed that unfortunately there wasn't any wash off area this year but they hoped to get one for next year. If I was aware of this I would have brought my own gallon of water to use. What made it all the more frustrating was that we noticed a few hoses that people were using to clean up when we were walking back to the car. Next year I would suggest investing in a changing tent and clearly marking the wash off area.
Conclusion: For a first time event, Samurai Sprint Mud Run was well organized and a successful addition to the local racing scene. Many of the minor issues can easily be rectified for future races. The obstacles were challenging and fun with a few unique ones that I haven’t seen at any other events. The fantastic venue added to the appeal. I hope they continue to grow and evolve and I’m looking forward to seeing what they come up with next year!
4 out of 5

Did you do the Samurai Sprint Mud Run? Share your own rating & review about the event today!