I AM OCR: Corinna Coffin 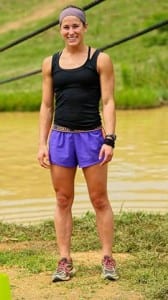 “What the Hell am I doing here?” I thought to myself as I stood in a pack of about 40 men and women in the Elite heat of the BattleFrog Race in WV. My only previous OCR experience had been almost a year earlier at the Super Spartan in VA. Despite running in the Open heat, I’d put up a pretty competitive time which gave me some confidence heading into the BattleFrog race; however, my confidence began to fade once I arrived. The majority of the racers were clearly seasoned veterans at the sport, and I felt like a freshman on the first day of high school. I watched as racers exchanged hugs, fist pounds and high-fives in the minutes leading up to the start of the race. I wondered how everyone seemed to know each other here. Little did I know there was a whole OCR community I would soon be introduced to. Picking a spot somewhere in the middle of the pack, I made sure to stay out of the way of the more serious racers in front who were clearly there to win. I took a deep breath and told myself to relax and just have fun. When the gun went off, my first OCR in the Elite heat had officially begun. 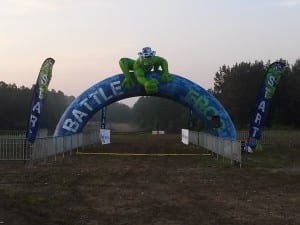 A week or so earlier, my friend Mandy Baskin, who worked out with me at our outdoor fitness class, SEAL Team Physical Training, mentioned there was an upcoming obstacle race called BattleFrog and said I should do it. While it sounded pretty cool, I’d never heard of it before and didn’t give it much thought. The evening before the race, however, Mandy messaged me again saying she could no longer race due to an injury, but had a free entry code I could use, if I was interested. I thought it’d be great practice before my upcoming Super Spartan Race in VA the following month so I registered for the BattleFrog at 10:30PM the night before. Six hours later I was in my car making the 2½-hour drive to Hedgesville, WV where the race was being held.

Despite feeling miserably out of place in the starting shoot, the race was an absolute blast and, needless to say, turned out far better than I had anticipated. To my surprise, I found myself leading the females within the first mile or two, and worked to increase my lead throughout the course of the race. Although I could hear the buzz of the race venue as I neared the finish, there were still several miles of muddy, obstacle-laden track left for us. We ended the race with an uphill barbed-wire crawl in the mud to the finish, and I crossed the line claiming the first female spot. I left the race that day having met a lot more people than the whopping zero I knew upon arriving (as well as a check for $1,000!). 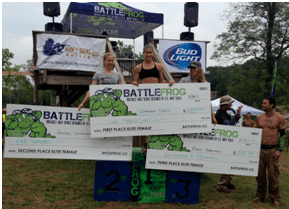 Little did I know just how much insight I’d gain into the OCR community over the next few days following the race. Through my newfound OCR friends, I also learned about and signed up for the upcoming Spartan Sprint in DC the following weekend, marking my first Elite Spartan Race. There, I managed to podium a second time with a second place finish behind Pro Spartan Team member, Orla Walsh. Prior to my back-to-back podium finishes, I had no idea there was such a thing as Pro Race Teams for obstacle course racing, let alone just how big the OCR world was in general. I’d never heard of Amelia Boone, Junyong Pak, or Hobie Call, who just so happened to be “that guy who ran with me for half of BattleFrog as race monitor.” Now, thanks in large part to social media, I’m slowly becoming immersed in the OCR world and learning a great deal about the many talented racers, training regimens, and, of course, the big upcoming races.

The past few weeks have truly been a fun and eye-opening experience for me and I’m very much looking forward to competing in even more races and seeing where I stack up against the fierce competition projected to be at the upcoming Super Spartan in Virginia. Aroo!