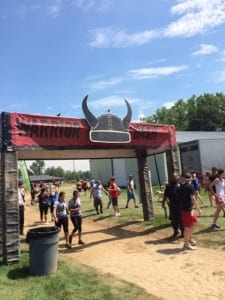 With Warrior Dash being one of the larger race venues in OCR, I thought I would see how it stands up. With impending rough weather a good possibility on the forecast, I arrived at the event. The parking ($10) was well executed and very orderly. Creating lines of vehicles as we arrived, it was kept very organized.
From there through the entrance gate to the event under the giant signage emblazoned with the Warrior Dash logo. After the entrance, it was a little difficult to immediately see how the layout of the venue was organized. Near the entrance were some vendors tents and some product samples being distributed. A few of the main sponsors were located in this area as well.

I arrived well prior to my heat; thankfully as the lines for the packet pick up were very long. Another shot of luck occurred as the impending weather abated with only a few sprinkles of rain to show for the forecast. After that, the weather turned out to be a hot/sunny day for OCR. After making my way to the pick up table, I was provided with my event shirt, bib, and trademark fuzzy warrior helmet. Next to the packet pick up was the bag check area. Have a free bag check was a pleasant sight to see at any OCR. After being provided a stick on bracelet corresponding to the number for my bag check, I was on my way to get the event started.

Opposite of the packet pick up was the main event area. The main area had a stage with bands playing, and tents with merchandise, beer, and assorted food items. Insert giant turkey leg here.
The event finish was the only section visible to the spectators, but provided a good deal of great obstacles to observe the finish of the event. The starting area was a little difficult to determine with the amount of people milling about, but upon gearing up, and locating it; it was time to get things started. 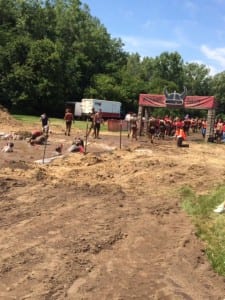 The starting gate was designated with a good deal of metal bars leading up to the overlooking starting gate. After getting everyone in order, the emcee fired up the crowd in anticipation of the start. With the firing of some pyrotechnics, we were off. The beginning started with a short run across the grass to leave the main event area. This event was a self-timed race aside from the first two competitive heats of the day. Quickly into the event, I had decided that an early sign up into one of these heats would have been desirable.

After exiting the main event area, the course began to wind down some dirt/sand roads leaving the area. Shortly after beginning down this trail, we were ushered aside by an ambulance approaching from behind us to attend to an injured Warrior ahead of us. Good to see that no matter how remote an event may be that they can still get medical attention in for the protection of the participants. It was not until crossing the mile 1 marker did we reach our first obstacle. I personally thought this was a little bit too far from the start for the first obstacle, as the distance to dissipate the crowd had occurred well prior to the obstacle.

Obstacle 1 was a series of six foot walls, and some netting to crawl under. The area to crawl was fairly rocky and sandy; so the bear crawl came in very handy here. The participant next to me struggling over the rocks observed how I was progressing through it, and stated she likes my idea and adopted herself to get past the net. A few more walls, and it was time to progress deeper into the woods.

Obstacle two was something new to me; a river forge with a floating island to traverse. Wading into the river was easy enough, until the depth proved too much to walk; and all participants were required to swim to the island “Alcatraz”. Climbing onto the floating island and balancing across the bouncing surface; I crossed it, and jumped back into the deep water. Swimming to the other side of the river, up the hill, and further on. The wooded trails proved to be fairly narrow, and passing slower moving participants proved challenging at times. 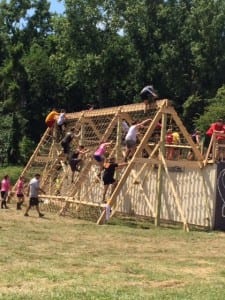 Up to this point, aside from the trails becoming somewhat congested, the race progressed at a pretty solid pace. This all came to a grinding halt as I caught up to the tail end of the previous heat waiting at an obstacle. A ladder/wall climb up an overhanging wall section slowed the field quite considerably. Mostly every obstacle from here on out I encountered this wait. Aside from the fire leap, it slowed to minutes of waiting at each of the remaining obstacles.

Rounding a corner in the woods, the sound of the bands and the event area came into earshot. For many events, it almost always seems to broadcast the nearing of the end. Exiting the woods opened up to the last string of obstacles to be conquered. Unfortunately, another line awaited myself and the other participants for a large/angled rope wall climb. There were a total of 5 stations to traverse the wall, but it still remained congested. The pair of outer two stations had cleats tacked to the wall about every 5 feet, with the center lane having no cleats, and just the rope and bare wall to ascend the summit. Over the top, a standard wood-stepped ladder section took us back to earth. A fifty yard dash led us to the 2nd to last obstacle of the day. 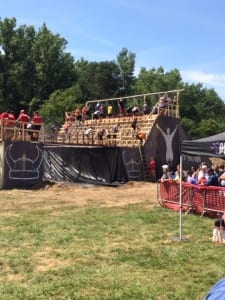 A large cargo net led us up to a platform to walk the plank. 3-4 beams extended from our platform to the other side approximately eight inches wide. Ropes led down both sides of the planks to help with your balance in traversing this section. Anyone not nimble enough to cross this beam, with water being sprayed in their face, awaited a good drop into the pool below. From there it was onto the Warrior slide of death. The slide was just like being a small child again, except for the plunge into the muddy water awaiting you at the bottom! Hitting he water, I was accosted by this muddy water being fired up my nose by the force of the impact of the water. Clearing that out, we made our way to the last challenge of the day Warrior Dash was to throw at us. A fifty yard crawl through a muddy soup under barbed wire. The distance of the wire above the water required everyone to dunk their heads into the muddy mess to proceed forward. Exiting the crawl, we were greeted with the finish line, a medal, and the feeling of a Warrior's victory in accomplishment. 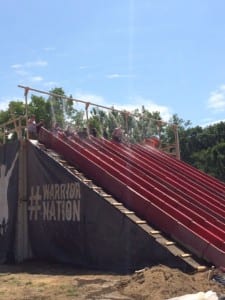 Moving past the finish area, we entered the shower section. It was fairly well laid out, but the height of the water output made it somewhat difficult to remove the days mud from the participants. However, it was a welcome sight upon exiting the mud crawl to know you accomplished a great thing, and could move forward to the celebration.

A free beer awaited all those of age to be consumed in the atmosphere of the band and their fellow “newly-anointed” Warriors.
Overall, aside from some initial confusion and congestion at some obstacles; this was a solid event. The organizers and volunteers did a great job to put on a great day. I confidently believe that participating in the competitive heats would have alleviated many of the small concerns faced during the day. Warrior Dash has a great event going here, and I would be very inclined to participate in this event, and possibly other state's events as well in the future.

Did you do the Michigan Warrior Dash? Share your own rating & review about the event today!