For the fifth consecutive year, the Reebok Spartan Race brought their 3+ mile event back to the New England area. The wildly popular race series spanned two days and was also being filmed by NBC for a future broadcast. After putting in a full day volunteering on Saturday, I was excited to return on Sunday to tackle the course that many were claiming was the toughest sprint distance race every held in the area. 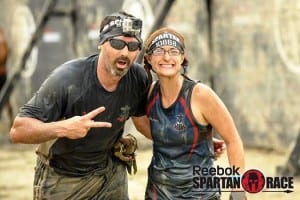 LOCATION/PARKING: Like all previous races, the event returned to the Amesbury Sports Park, the hub of Obstacle Course Racing in New England. Spartan Race has always excelled at creating a new experience for each event by varying the obstacle locations and incorporating new trails throughout the complex. Anyone familiar with races held here is well versed on the parking situation. For a $10 fee, participants are sent to a satellite lot at a local abandoned dog racing park and shuttled over to the venue. With the amount of people registered for the two day event, Spartan Race does an amazing job with transporting racers over to the venue. After arriving in the parking lot, there was a small army of busses waiting to shuttle us over. No wait at all. It was impressive how efficient the process was.

REGISTRATION: Racers were greeted with large boards filled with bib numbers for those that didn't already get them online. Registration tables were separated by bib numbers. Along with the usual race waiver, all runners were also required to sign an additional waiver due to the presence of the NBC cameras. After handing over the waivers and showing our IDs, we were presented with our race packet, including a timing chip, racing bib and personalized Spartan Race headband with your bib number on it. 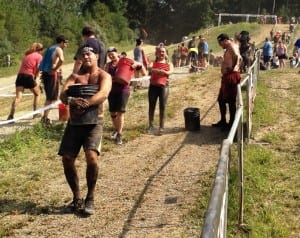 COURSE: Similar to last year, the starting gate was located half way up the mountain. After a quick jump over a 5-wall into the starting corral, we anxiously awaited the countdown. GPS running watches calculated the course to be just over 5 miles long. Along with the extended distance, Spartan Race also increased the difficulty of many of their standard obstacles while also incorporating a few newer ones. This race was by far the hardest one I have encountered at Amesbury. After trudging up the hill and through the back woods, we hit the rolling mud obstacle consisting of a few waist deep mud pits with a log balance beam across one of them. The course continued past the O-U-T (over, under, through) walls and through the scenic trails to the 6’ walls. New this year was the inclusion of a few “team” obstacles. Right next to the 6’ walls were a couple 10’ walls for teammates to help each other over. The other team related obstacles included another 10’ wall, team log carry and tire drag later in the race. Spartan Race had music pumping through a few speakers setup along the course to keep runners motivated. As always, the volunteers were encouraging and helpful. After heading over the invert wall, we came to the tractor pull and log carry obstacles. I’m assuming the intention was for single runners to do the tractor pull and teams to pair up for the log carry. Most people ended up doing both. The volunteer at the log carry station wasn’t very clear on what needed to be done. She seemed too preoccupied with her cell phone. We continued to the tire drag and sandbag carry down and up a steep hill before heading into the trails towards the monkey bars. Spartan Race increased the difficulty by spacing the bars at four different heights. 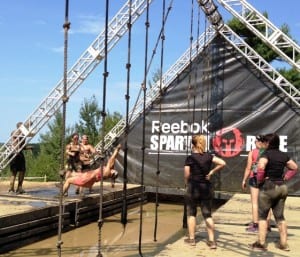 Back into the trails and to a new obstacle located at the top of the hill, the rope swing. Now I approach every Spartan Race with the goal of running a burpee free race. However, I have yet to accomplish this goal. I’ve fallen off traverse walls, slipped off the log hop and missed many a spear throw. Approaching the rope swing, my burpee free race was still intact. The obstacle seemed simple enough. Just grab the knotted rope and swing across a few feet of water. I must have underestimated the distance because I lost my footing and swung back to the other side. With only one attempt allowed, my burpee free mission will have to wait until Fenway. I found out later that earlier runners were given three attempts at it. Ohh well! Still cursing at myself, I headed down the hill to the Hercules Hoist. The weight was increased this year to somewhere between 115-125 lbs for the men. 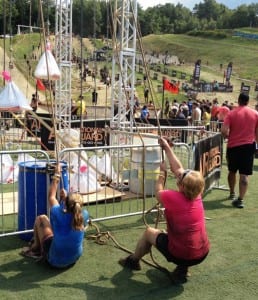 Immediately following that was the toughest obstacle of the day, the bucket brigade which involved filling a bucket to the top with gravel and carrying it up and down the hill without using a handle or resting it on your shoulders. No easy feat but I managed without allowing the bucket to touch the ground. After a moment to catch our breath, we headed up the wooden ladder, over the bridge and down to the slip wall. We continued over the 7’ wall towards what was affectionately referred to as “burpee country”, a stretch of three burpee inducing obstacles: the rope climb, traverse wall and spear throw. For the rope climb, the diameter of the ropes was reduced and there were no knots. The only way up was a strong grip with serious upper body strength and proper technique. Attempting to get started while in waist deep water also added to the difficulty. Many runners failed this obstacle and I would suggest they add knots to a few of the ropes to give people a chance. Luckily, I was able to work my way up the rope and ring the bell. I was also able to shuffle across the slick traverse wall. My previous and only successful attempt at the spear throw happened at the Fenway race last year. Thankfully I nailed it again as the spear stuck in the bottom of the hay bale. I was able to escape all three obstacles unscathed which made the misstep at the rope swing all the more aggravating. Next up was the seemingly endless barbed wire crawl. Every time you thought it was over, you would crawl over another mound and see another long stretch. Similar to last year, the end involved submerging your head entirely under the dunk wall. We continued to the fire jump and down the mountain to collect our hard earned medals. 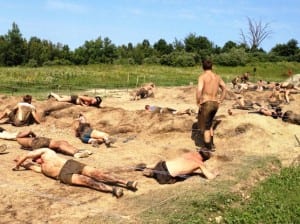 POST RACE: The gray light weight shirts were a better quality than last years. Each lanyard included two solidly crafted medals: the classic round red helmet one and the new 1/3rd pie-shaped one for those interested in completing a trifecta. The wash off area had plenty of hoses to accommodate the large amount of runners. Two good sized tents were nearby for changing. A row of porta-potties was also located near the showers, tucked away from the main concourse. For the amount of people at the event, the festival area was large enough to not feel too crowded. There were a few vendor and merchandise tents along with a few fitness challenges to keep people entertained throughout the day. 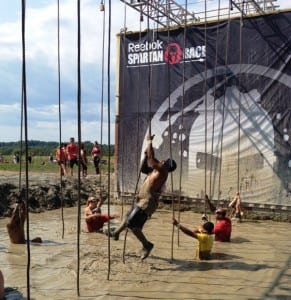 Spartan Race excels at offering unprecedented spectator access. There was a path leading up the hill that allowed spectators to view many of the obstacles for some great photo opportunities. Another benefit that Spartan Race offers is the free digital photos that are available about a week after the event. However, in additional to the limited actual photographers in the course, they continue to rely on stationary cameras set on timers at some of the obstacles, making for some less than stellar photos. If runners were even able to locate them, most of the fire jump pictures were fairly unimpressive. With the amount of people trying to leave late Sunday afternoon, there was a substantial line waiting to get shuttled back to the parking lot. I would estimate it took about 45 minutes.

CONCLUSION: Spartan Race continues to prove why they remain a leader in the industry. They always offer something new at each event they have. The added distance of the course, the increased difficulty of the obstacles and the implementation new trails had most people raving about the experience. Spartan Race once again raised the bar as they continue to grow and evolve.
https://www.youtube.com/watch?v=xoBh-9JkAks

Did you do the New England Spartan Race? Share your own rating & review about the event today!