The use of Trekking Poles has been increasing in the hiking world over the past few years, and is recently becoming more prevalent in Extreme Fitness Racing (Death Races, Catamount Games, etc,), Rucking, and now Obstacle Course Racing. Of course, a “normal” OCR doesn't give much opportunity for Trekking Poles to be of much assistance when you’re mostly running. But in this past weekend’s Virginia Spartan Super held at the Wintergreen Ski Resort, it was recommended that I use a pair to assist in my stability and exertion that would be required with the incredibly steep uphill and downhill grades I’d be facing, and I could expect very little running to actually be possible. Other Obstacle Course Races with hellacious grades to negotiate (like Vermont) might be good opportunities to have Trekking Poles provide assistance. 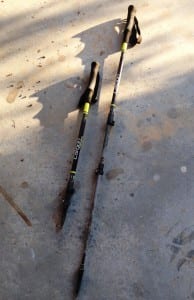 (Background and Spoiler Alert) – I have a recently surgically repaired broken ankle on one leg and a torn meniscus in the knee on my other leg. I am fully convinced that had I ignored this advice and tried to tackle Wintergreen without the trekking poles I would have injured myself badly and/or not been able to finish the race.

I asked for and received several recommendations for various poles like the Leki Cork Lites and the Black Diamond Collapsibles, but when my procrastinating self arrived at REI just days before the event they didn't have those poles in stock. They did, however, have their REI Brand Carbon Power Locks. The salesman is an avid hiker and has used all three mentioned brands and he assured me that I was not sacrificing quality or performance by going with the “Store Brand”

The Poles come in sizes for both men and women. The longer men’s poles collapse to 27.5” and expend to 55.1” and weigh just 15.7 oz for the pair. The shorter women’s poles collapse to 22.4” and extend to 47.2”, weighing 14.3 oz. The poles have 3 separate telescoping sections that collapse and extend via a locking lever that is easily manipulated even with gloves on and covered in mud. The grips are a contoured rubber foam and there are adjustable wrist straps that help take the pressure off your hand and make it easier to maintain a good grip even when you’re working hard on particularly uneven terrain like maneuvering up and down long stretches of boulders and rocks.

As I stood in the corral waiting to start on Saturday it dawned on me that for the parts where I’d be running I really hadn't thought about what I’d do with my poles. I tried to stick them in my camelbak, but that didn't work too well. In the future I think I’ll figure out Velcro straps to tie them onto a camelbak, but when the announcer asked for the final AROO! and sent us off through the smoke and the fog downhill I just held them in my hands and ran. It wasn't too bad and I didn't poke anyone’s eye out.
Way too quickly we encountered our first muddy steep hill, and for me there was going to be no more running at all for the rest of this incredibly long day. It was immediately evident that the poles were worth every dime I’d spent for them. Going uphill in the slick mud and beaten down grass with 4 points of stability, I was so much more confident than I would have been on just my own 2 feet. The poles have metal tips that went down into the mud very securely, yet never got stuck as I passed. Having the poles allowed for me to use my arms in conjunction with my legs to climb upwards, and this relieved some of the pressure on my ankle and knee, so they were not as painful as they’d just been moments before on the short downhill jog. And since the poles took more weight off my feet, each footfall was less likely to slip on the poor footing. The upper body workout that comes from using trekking poles was evident in the slight soreness in my arms and pecs on Sunday, but using 4 limbs to climb a mountain is preferable to only using 2. I’m very sure that spreading the work out helped prevent me from having any of the leg cramps that I saw so many other racers suffer. 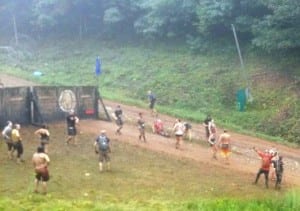 On the downhill grades, especially the incredibly challenging ones with the rocks and boulders and roots and ruts etc. the poles helped with stability and easing the pressure to my joints enough that I could actually enjoy letting gravity assist me on the way down without being more terrified that I’d twist and re-break my ankle or blow out my knee. On more than one occasion I lost my footing and was able to catch myself with the poles before face planting into a rock and possibly hurting myself badly. Initially I was skeptical about how beneficial it would be to use a metal tip onto a hard rock and wondered if it would just slip off the face of the boulder, but that never happened all day.

Conquering the obstacles with the poles was a relative breeze. Oftentimes I just laid the poles next to the walls, cargo nets, and other obstacles and completed the task at hand, then went and picked the poles up. For the Spartan Pancake sandbag carry I balanced the bag on my big, flat head and used the poles to negotiate the course, only laying the poles down to climb over the walls. It was pretty fun too.

As this brutal OCR continued to tax me mentally, emotionally, and physically the trekking poles continued to reassert themselves as being possibly the best money I have ever spent in my entire life. God’s sense of humor was apparent to me because early into the race He allowed the sole of my new Marine Corps Combat boots that I was wearing for ankle protection to completely tear off, taking away any traction at all I had for my right foot. I literally did this muddy OCR with 50% of my traction gone and every other step in the mud being on a racing slick. Without the poles there is no way I would have finished the race, let alone survived injury free. 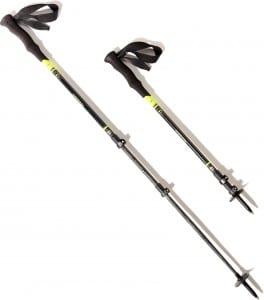 By the end of the race, in the pouring rain, with darkness rapidly approaching, people who passed me as I was trudging up or down the hills yet still moving relentlessly toward the Finish Line commented on how much they wished they had brought trekking poles. Several people offered me huge amounts of cash on the spot if I would sell them my poles, but there was no way I’d part with pretty much the only things that were going to help me achieve my goal.

In short, for most run of the mill OCRs, trekking poles aren't going to provide much of an advantage. But for the Virginia Spartan Super they are the only reason I didn't get hurt, completed the race, and am not still stuck on that mountain lying bloody, bruised, or dead under a boulder. I will never take a challenging hike, go on a difficult ruck, or do an Obstacle Course Race of this nature ever again without trekking poles.