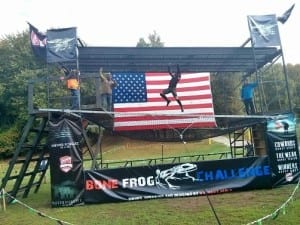 The only easy day was yesterday, this is my life motto/creed which I borrowed from the Navy SEAL's as it is their motto/creed. As I noted in my Bone Frog pre-race article, this event has been one of my most anticipated races all year! The day was just as it should be for a Navy SEAL OCR, it was pouring rain and not exactly warm.

I arrived late, due to my GPS going rogue and taking me the wrong direction and just making mistake after mistake with each road. I was still able to find parking in a school parking lot, (I checked with a local police officer and was told it was okay to park). My friend Kelly and I quickly made our way to the registration area and within minutes I was registered and ready to run both the 15K and 5K versions of the courses. It started to rain even harder, and I found humor seeing a lot of pre-racers under tents getting ready to run the course. I found myself a park bench, dead in the thick of the storm and got all my gear on, I figured better to get used to the rain now and just deal with it.

Unfortunately, because I was late, I wasn't able to run the 15K course with my friends the “MIAMI Mudders” so I made sure both MP3 players were in my shirt snug and I got ready to run the course. Funny story moment: with about three minutes to the start of the race two really cool ladies (Fina Ryan & Gina LaGuardia Schrecker) came up and asked me to take a picture with them (photo is included in the article). At the time, they had no clue I wrote for MRG or had a Facebook and Instagram page, but they figured, hey lets get our picture with this dude, lol. 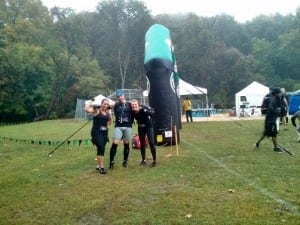 The DJ was playing good music and doing a good job to pump up the spectators and racers, which with the weather, wasn't as easy as most days. The race started and off I went. It did not take long to get to the first group of obstacles, and right away one of them was a very challenging monkey bars that were not your typical bars that went all the way across but rather these were like handlebars on a bicycle that stuck out. This was my first time doing this style of bars and I found it to be very challenging. For the most part, the course was set with a lot of the obstacles not far from each other and then long distances of running They did make sure to have a few obstacles like the sand bag carry and “31 Heroes” placed out on the course, but for the most part this course was one that would challenge you as a runner and at doing obstacles at different parts of the race. I expected this based on my MRG pre-race article I wrote so it was not something that came as a shock. Bone Frog has done an amazing job when it comes to building the obstacles. They are all very big, and intimidating, but most of all built out of the best materials and carpentry skills, so at no time did I feel like I was in any danger. At one point late in the course (both the 15K and 5K) you come to a field that had ten total obstacles within a very short distance from one another that challenges the racers in several ways, rope swing, wall rope climb to monkey bars to climb down a rope, a cliffhanger (which with the rain was even more challenging), and then more monkey bars. 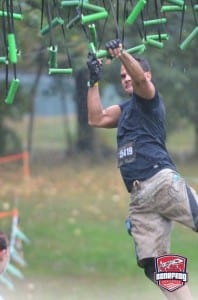 At this point I could sense I was not that far from the finish and I could tell the other racers could as well because you could clearly see some of the racers pushing even harder. I won't lie, I also saw some racers not pushing hard at all and just passing obstacles and not doing the penalties! One cool thing about this course was the penalty was not always the same, it varied from obstacle to obstacle and could be pushups, jumping jacks, burpees, and other type of exercise. I worked my way to the final home stretch and came to a pond, I could tell the pond wasn't deep, but I still dove in and swam the breast stroke to a float in the middle. I climbed on the float, and with a running start, dove off the float screaming Hooyah! I breast stroked the rest of the pond and then came to the final obstacle (the Black OPS) which was a wall rope climb to the last set of killer monkey bars (see photo in article). I was able to complete the monkey bars and when I was at the last monkey bar one of the volunteers reached out to give me a hand, I had my MP3 player on so I am sure I yelled a lot louder than I expected and I told him not to touch me. The volunteer smiled and backed off, I did one pull-up and then stepped onto solid ground! I climbed off the obstacle and did a cartwheel at the finish line. I am thinking a 45 year old man probably shouldn't be doing cartwheels and I don't plan to make it my signature finisher. 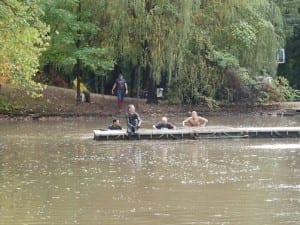 About forty five minutes later I was able to run the 5K version of the course with the “MIAMI Mudders”! For the most part the 5K course has all the obstacles (minus I think three) the 15K does and is one of the more challenging 5K course I have done so far.

Both courses were very challenging and I had a great time! I also think the heavy rain only made it better. The volunteers on the course were all very alert and aware of everything going on and ready to offer a hand whenever needed! They also did a great job encouraging the runners to keep up the great work and kill the course. I really enjoyed the course and obstacles and the only minor issue I personally had was with following the taped areas and staying on course. I personally ended up off course twice and had to back track and witnessed several others make the same mistake at both spots as me. After the races I talked to several other racers who said that was the only complaint they had about the course and the event.

I was very impressed that Bone Frog has a different finisher's shirt for the 15K and 5K (I always scratch my head why the bigger OCR's do not do the same). At the finish, I was greeted by Brian's mom and wife and they were both very friendly and clearly proud to be part of an amazing day/event. I also was able to grab a handful of free Frog Fuel's which came in handy the next day at two other OCR's I ran on Sunday (articles for both will be posted). I also am not a big beer drinker, but I have to say the free beer (Founders Brewing) provided at Bone Frog was one of the best beers I have had so far. The first beer is free for finishers (21 and over) and then they only cost $3 per beer for finishers and $5 for spectators. 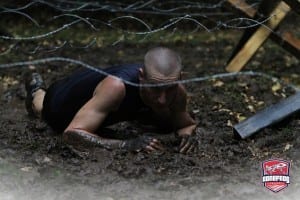 Unfortunately, due to the heavy rain the event didn't have a big after party, but everyone that stuck around had a great time and didn't let the rain ruin the day/event.

I was very happy with the event at every level. Bone Frog does not have a million dollar backer and is clearly a company run by Brian, his family, retired and active military friends and well educated volunteers and they put on a great event with great obstacles!

The schwag is top notch and you won't see better at any OCR, the medals for both the 15K and 5K are big, sexy, and top quality. As already mentioned above, you get a finisher's shirt that clearly indicates what course you completed (other OCR's need to do this!) and racers were encouraged to take as many Frog Fuels as they wanted! 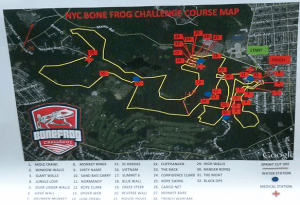 Now for my favorite part of the article, Bone Frog was able to raise and amazing amount of money for charity from this one event alone. Between donations collected during participant registrations, on site (during the event), and money provided by Bone Frog they raised a total of $14,260 for One Team One Fight. One Team One Fight is the umbrella charity that encompasses the Navy SEAL Foundation and 31 Heroes Project. One Team One Fight will split the money raised evenly between the two charities. It’s important to keep in mind that Bone Frog has yet to make a profit from any of its events and a major reason why is the amount of money they continue to donate to charity.

I am rating this event a 4.5 out of 5 stars and the only area Bone Frog needs to improve next time is the markings on the course! I plan to be at every Bone Frog Challenge that is in reasonable driving distance going forward.

I want to close by saying this, a week earlier, while at BattleFrog an OCR acquaintance of mine stated the reason she and a lot of other OCR regulars were not going to Bone Frog was due to it being held on the same weekend as the Ohio Spartan Trifecta. I have done my share of Spartan courses this year and I can personally tell you I am so happy I didn't skip Bone Frog to run basically the same Spartan obstacles I have run six times already this year. I suggest making Bone Frog a priority for 2015 regardless of what other OCR event falls on the same day. As always, I want to thank MRG and Bone Frog for such an awesome day!

Did you do the New York City Bone Frog Challenge? Share your own rating & review about the event today!