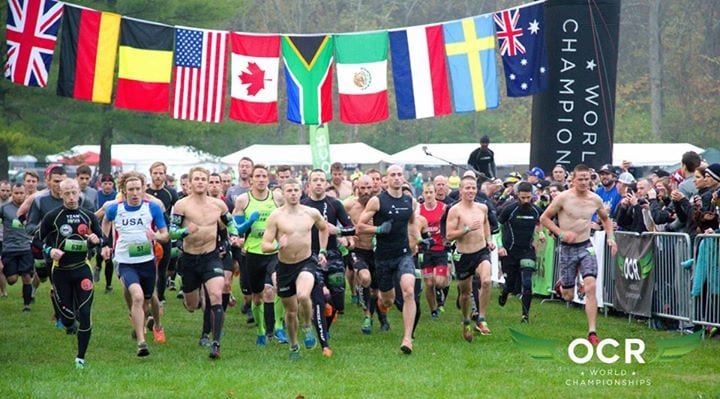 With the inaugural OCR World Championships in Ohio this weekend, we wanted to get some thoughts from a few of the pre-race favorites. Kien Lam got some burning questions answered for us. Be sure to check out what the women had to say at his site, Where and Wander

1. Who do you think will be the other contenders on the men and women’s race?

Hobie: I haven’t been following who will be here on the women’s side, so I have no idea, but for the men’s: Brakken Kraker, Junyong Pak, Ryan Atkins, Jon Albon. Not in that order necessarily.

Jon: I know Ryan Atkins is really strong. I haven’t raced Hobie Call before, but I know he is a legend of the sport. After that, I’m sure there are some amazing athletes that have come from around and will be really quick, there is a large possibility the winner will be someone I have never heard of.

Brakken: This is a difficult race to call, as so many foreigners will be racing who are unknown to us. Jon Albon, Ryan Atkins, and Hobie Call would be the three biggest worries for me at this point, but I'm sure there will be plenty of others ready to throw their hat into the ring!

Marco: On the men's I know Hobie wants it bad, but I believe Ryan Atkins and Jon Albon will give him a challenge. Junyong Pak should be up there as well along with a few more. I believe we could have a couple of surprises from the Europeans, but I know how traveling far is hard on the body! On the women's side it could be the same story, a lot of strong surprises but I have to give Claude Godbout the benefit of the doubt since she's been almost unbeatable all year (she is undefeated in everything over 5km!) Corinna Coffin should be a strong contender with a couple more from all around! I heard there's a super fast Swede coming!

2. What do you think will be the deciding factor on the course?

Hobie: Well, obviously you have to to be able to run and mandatory obstacle completion will make a big difference in the results I believe.

Jon: Every course is different it does depend on who this one will suit. The running sections are either extremely steep up or down throughout the entire 8 miles so someone that can keep their speed up these but also manage to complete all the obstacle the first time through will be laughing.

Brakken: I think the deciding factors on this course will be game plan and efficiency. Everyone is fit and everyone is capable of a fast race, so it will come down to who puts themselves in a position to make a big move at the right time. The obstacles are tough enough and the race long enough that execution will be paramount.

Marco: Whoever can run intensely for 15k! It seems like it’s all up and down non-stop! Some of those obstacles can really factor in too if not done properly! I.e. “Weaver”

3. Did you do any special training to prepare specifically for OCRWC?

Hobie: Actually, I trained for the Warrior Dash Championships, so my endurance and upper body may cause me problems tomorrow.

Jon: Not really. Since the Spartan Race in Vermont, I raced in the Limone Extreme Skyrace which took a lot out of me so I haven’t really had time to work on anything specifically.

Brakken: I feel that this race sits nicely in between Spartan Championships and Warrior Dash Championships in terms of length and obstacle difficulty, so by training for the first two I feel confident that I am prepared for this course.

Marco: Mostly ski training and the main prep was more on racing OCR itself! I raced 14 OCR, 2 trail run and 2 X-triathlon this summer, so that's a lot of threshold right there! I also built a Rig at home to build grip strength and it works amazingly well!

4. What shoe/gear will you be using?

Jon: The most important part of my gear will be my Inov-8 212 trainers. The ascents and descents really are sharp and the grip on the 212s will help a lot. Providing the confidence to come down quick and the grip to power up is invaluable.

Brakken: I will be racing in the Spartan Pro Team Reebok half tights and Inov-8 X-Talon 190s. I will probably wear Mudgear Madgrips gloves if it is cold, as well as Mudgear Compression socks.

Marco: I have been trying different brand/models over the past few years and have stopped my choice on S-Labs! Salomon makes true racing products, which we are used to in skiing and with different models to choose from I feel nothing is close to them for me! I'll race on either the SG or the Fellcross 3 Saturday! For clothing I have been using C3Fit all summer, their impact compression pants made especially for trail running works well for me with intergrated taping on the hips and quads! C3Fit calf sleeves and darntough socks complete the bottom! For top, BattleFrog partnered up with Athletics8 to get us custom fitted and printed compression long sleeves that looks more than awesome. Badass!

Jon: I normally eat something carb heavy in large quantities but I’m not sure how much it helps. As long as I don’t have anything that will repeat on me, give me the runs or make me dehydrated, I’m happy.

Brakken: Diet isn't something I'm too strict about, so I try to give my body whatever it's craving before a race. Dinner will probably be pizza or some sort of salmon.

Marco: I'm not one who stresses out on food but I will participate in the get together with the others and I'm sure I'll find what my body needs!