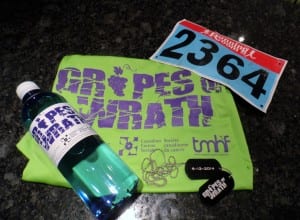 Grapes of Wrath, Picton, Ontario, Canada –Sept 13, 2014
I really enjoy the races that are closer to home. Anything within about 1-2 hours is reasonable. The Grapes of Wrath was one such race located in Prince Edward County, Ontario. As we departed early in the morning, which seems to be a racing ‘norm’ now, it was overcast and quite cool dropping down to 9 degrees overnight. We had packed our long sleeves and ¾ pants just in case.

Location
The location, as mentioned above was more specifically at the beautiful Hillier Creek Estates. This location had 50 acres of land with 30 acres of vineyards. There were large out buildings and a well groomed main house and the venue was set just over the hill in a small clearing. Signage was good to arrive at the destination and it was easy to locate from the main highway.

Parking
Parking for media was on-site and for participants it was a short distance away where buses shuttled you back and forth from the main roadway. A small fee was charged for the parking.
Registration/Race Kit Pick-up
This event was capped off at a few hundred people and each participant paid a $100.00 entry fee and gathered donations that went towards the three local charities: Canadian Cancer Society, Prince Edward County Memorial Foundation and the Trenton Memorial Hospital Foundation. Upon arrival, racers were directed towards the clearing to pick up their race kits (unisex tech t-shirt, Grapes of Wrath bottled water and race bib) and had the opportunity to purchase a Burpee Pass. Each pass was $10.00 and you could purchase two per participant. We decided to buy two each and the volunteers then wrote BB on your forearm to show obstacle marshals along the route if needed.

Bag Check
Bag check was available on-site free of charge, and most racers took advantage of this as it was a long way back to any vehicles and the bags were being protected in a tent to prevent them from getting wet.

Washrooms
There were two portable toilets near the starting line and one more located mid-way through the vineyards. There was also main building access where another small indoor washroom was located just adjacent to the vineyard showroom.
No showers were available at this location, or change rooms that we could find. We ended up quickly drying off and changing beside our car. 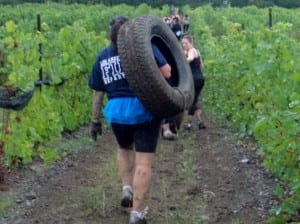 Race Details
There were a few spectators at the main area, but the weather was continuing to decline and the rain started just before our 09:30 heat. An MC kept the music going throughout the event and that helped motivate the wet participants to weave their way in and out of the vineyards, tackling 14 obstacles along the route. Subway was one of the vendors on site and racers had the opportunity to purchase a sandwich, drink and cookie for $5.00.
Volunteers were scattered throughout the event and were dressed in white and later rain gear and helped direct racers from start to finish. The markings that we were told to follow started to fade at the halfway point due to heavy rain and had to be re-applied on the ground (orange arrows) so that the later heats could continue to follow the course.
We arrived early and attempted to join an earlier heat, as it was getting cold and rainy as the minutes passed, but we were advised that we had to wait for our scheduled heat and only groups of 23 or so were allowed to race at each grouping. We returned to the main building to try and stay warm. 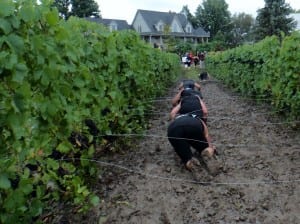 The race coordinator noted names down and the MC called out groups at each heat to confirm who was there and that racers were following the schedule. Finally, we were “off to the races” as the saying goes and headed out towards the first loop in the vineyard. It was clear that they had recently plowed between the rows as the dirt was uneven and furrowed, racers stuck to one side or the other and navigated their way in and out of the rows anticipating their first obstacle and trying to avoid a twisted ankle.
Around the second row we could see the mud crawl and were looking forward to getting dirty. The rain was a constant drizzle and added to the muddiness of the event overall. We scrambled under the wire and prepared for our next two laps. Around the fourth bend was the tire touch and then we emerged out of the first fields of grapes and headed across the lane over the creek via the rope bridge and towards the second vineyards. We stopped a few times to try and get the 2 inches of caked on mud and stones off our shoes as the added weight was slowing us down. Throughout the stated 5K course, racers could be seen with sticks and rocks attempting to pry off mud from their shoes and it became a constant complaint that could be heard as we wound back and forth and up and down the terrain. 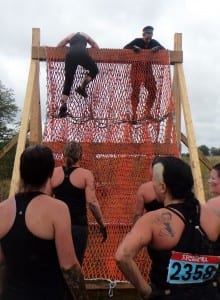 As we wove our way in and out of the vineyards obstacles became apparent. Some of the obstacles were hay bales, cargo climbs, walls, monkey bars and tunnels. None of these required our Burpee pass so we continued on in hopes of using them at the more advanced obstacles. There were tire drags, spider webs and sand bag carries and the final rope wall was where we decided to use our passes as there was quite a line up and I am still nursing a shoulder injury from a previous race.
There were two water stations well located along the course.

Finish Line
With the finish line well in sight, we sprinted to the last obstacle which is the ‘frosty wine enema’ consisting of 3 -3’ deep tanks, one with ice water, one with muddy water and the third and final tank was filled with grapes ready for the crushing as we squished in our runners with great delight. Photographers snapped our photos as we crossed the finish line and there was a main photographer taking aerial shots throughout the day.
Medals were plastic dog tags and we were a bit disappointed as it could have been a super medal with grapes and a purple lanyard to match some of the signage and limited SWAG.
Vendors/Entertainment etc… 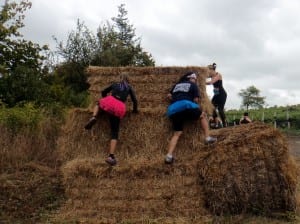 The MC entertained the participants near the start line, and music could be heard throughout the race site. The booths had minimal attendance and that was more due to the inclement weather. The local military had tents set up and it provided shelter to vendors and volunteers nicely. We were told there was a photo op area, but we did not manage to go there as the rain increased around 11:30 so we quickly headed over to change before getting too chilled.
A nice touch was that participants could purchase locally made wine at a discounted price and it was packaged up to commemorate the event with a choice of red or rose.
Overall turnout was 420 participants. Those are good numbers for a first time event in the hopes that next year’s event will increase in size.

Communications
This race had good communications and emails were sent with reminders and updates right up to a few days prior to the event. The website was easy to navigate and correspondence was responded to in a reasonable amount of time. The build-up advertising of the event was a tad inflated as it was more endurance -winding back and forth -than overcoming ‘large obstacles’.

Medical/First Aid
Medics were on site at a centrally located area and were clearly indicated.
Overall, this is a fun race for someone wanting to try obstacle course racing for the first time. Many of the racers we met said it was their first ‘mud event’. It would also be a good family event for those looking to get out and appreciate the beauty of our local vineyards. Obstacles are not difficult and yet, appeared to challenge the novice racers with some elements of discomfort –dark, wet, high, dirty etc…
We were surprised that some teams were not supporting each other through the obstacles and we remained to help those less experienced climb nets as it was not a timed event.
Garmin tracked the course at 6.6 KM and it took us around 1 hour 29 minutes to complete it including the 2-3 bottlenecks and helping out the newbies. Nobody passed us along the course so the spacing of heats seemed appropriate.

I had the opportunity to speak with Brad Warner one of the race directors and he noted that this charitable event raised over $60,000.00 and surpassed their goal of 50K. His hope is to increase awareness for this event next year and perhaps add a few more obstacles in a secondary field. He said “for a first time event we are quite pleased, the weather could have been better, and we have a few areas we will change around “he felt from a logistics perspective. But overall he thought it went “great”.
My suggestions for future events would be as follows:
• change the medal design to be more in line with the GOW logo;
• offer smaller size shirts if going with a unisex cut; (more than 85% of the participants were female)
• provide tax receipts for the entry fee for participants, if possible;
• add local vendor coupons to the racing kit; and
• sell seasonal merchandise such as sweat shirts/hoodies/long-sleeve shirts/socks/ponchos (it would have sold out due to the inclement weather )
Rating: 3/5 stars