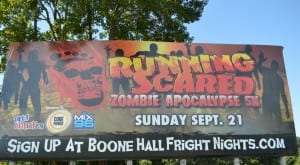 Joe Rogan would be proud, the zombies made me eat crickets… but more on that later.

The Running Scared 5k started in 2013 and is now the official opening event of Boone Hall Fright Nights in Mount Pleasant, South Carolina located just outside of Charleston. Fright Nights is a month long festival that is a combination of a haunted hayride, a medieval haunted castle, a 3D nightmare adventure, and a full blown zombie town. The Running Scared 5k kicks off all of the Fright Night festivities leading up to Halloween and includes a number of side shows, vendors, and a variety of food tents.

Each Running Scared runner starts the run with a belt holding 3 red flags attached by Velcro. The goal of the runner is to finish the race with all flags still on their belt. The use of flags to represent lives is pretty standard in the zombie runs I've seen. What makes Running Scared different is the use of a few zombie free “challenge zones” that gave you the chance to earn extra flags along the way.

The zombies came in two flavors: feasting zombies and the zombie horde. The hordes were basically aimless wanderers that are too “young” to have the blood lust of the feasting zombies that aggressively went after your flags. The catch is that runners cannot distinguish between the horde and the feasters as they approach them – until it's too late and the feaster zombies grab for their flags. 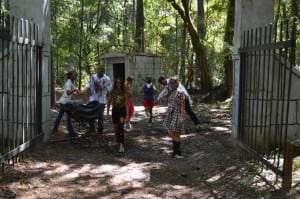 The 5k started out with a minor delay of about ten minutes at the start of the run and Trey Smith, creator of Running Scared, made light of it by getting on the PA system and apologized that his zombies were “moving a little slow, but that’s good for you runners!” This bit of humor appeased a crowd anxious to run.

Approximately ¼ mile into the run we came around a bend and met our first group of about 10 zombies. These zombies were a nice mix of feasters and the horde so runners were genuinely surprised when a feaster that seemed like part of the horde lunged for their flags. The course snaked through the plantation grounds littered with some cool stage props scattered throughout to make it seem like you were running through a graveyard at times, then a haunted hillbilly town, and a surreal section with several giant 8 foot tall bloodshot eyeballs. My personal favorite was a section of graveyard that featured a young female zombie dragging one leg behind her as she limped along carrying a baby… impaled on a stick. Seriously creepy.

The first challenge station where you got a chance to redeem one of your life flags was about a mile into the run and was called an “obstacle course”, which is surely wasn’t. The “obstacle” consisted of six over and under poles stacked on a few hay bales followed by eight old car tires to run through. This section was underwhelming at best and the course would have been better off without it. On a positive note, it was the only real disappointment on the course. 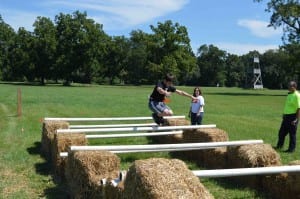 The course continued for another mile or so with a healthy dose of zombies at random intervals to the next challenge station. At this station you could earn another flag by eating a live cricket. Yes, you read that right. This was a nice surprise. I spent a while with the ladies running this challenge and taking pictures. I witnessed everything from petite young women powering through crickets and swiftly running off; to big muscular guys dry heaving as they described the crickets feeling like they were crawling back up their throats. It was a genius challenge station that threw an outside the box element into the race. This challenge station was the talk of the after party. 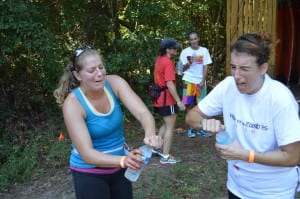 After the cricket challenge/snack station the course meandered through some more woods and a corn field to zombie town, the final challenge obstacle. Here the runners got their extra flag first, before completing the challenge, and they would need it. Zombie town bottlenecked you into several buildings where zombies popped out of refrigerators, out from under counters and out of pitch darkness grabbing at your flags. Then you ran back to front through a school bus filled with zombie kids in every few seats that snatched at your flags. If you made it through the building and the bus with at least one flag left you had to run through a final 40 yard zig zag maze filled with more zombies than you could count. I saw just one person come out of Zombie Town with a flag left on his belt.

At the after party that followed the run, for each flag you finished the race with you earned a raffle ticket to add to the one ticket you got for starting the race. The raffle tickets were for post-race drawings that gave away tons of prizes including a mountain bike, a certificate for a massage, and restaurant certificates. This was a nice touch. 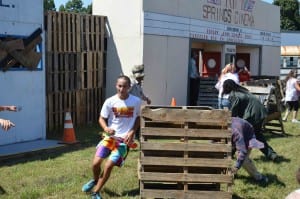 All things considered it was a good event, albeit a small one which is a shame. Trey Smith has a passion for the Halloween entertainment industry and is making a solid effort at establishing his zombie run as the premier event of its kind in the area. Hopefully in the years that come the Running Scared Zombie Apocalypse 5k Run will draw bigger crowds through word of mouth or more aggressive marketing. This in turn will allow the event to have more inventive obstacles on a larger scale. I can’t wait to see what the zombies make me eat next year.