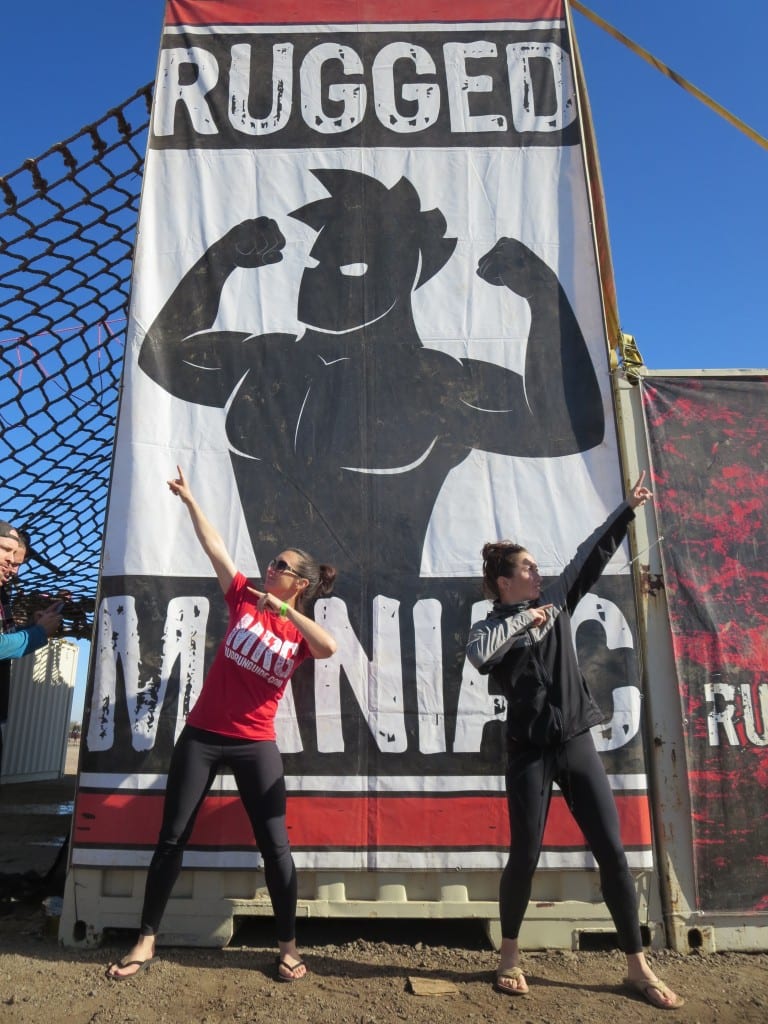 Tanya Manning shares her experience at Rugged Maniac in Arizona. This is my second Rugged Maniac, the last one was in 2012 before Shark Tank. I can say that I enjoyed it the first time, but the second time was even better.

To start, the race was held at the Wild Horse Pass Motorsports Park in Phoenix. There was ample parking and people to guide you to your spaces. Upon walking up to the race area, there were clearly marked registration tents and the bag check. A little further down you could see the vendor tents, food trucks, DJ and the start/finish line. Registration was simple and fast. There was good vibe even before the first heat at 9am. The costumes were on, the music was flowing and the crowds were trickling in.

My sister, Nicole Solana, and I ran the first heat at 9am with timing chips ($10 more to be timed). We jumped the barricade into the holding area and enjoyed the music until the start. We burst through the tape and headed off towards the first obstacle. As with any good race, they took advantage of the terrain and natural obstacles in their location. This area had barricades and tires as well as a small lake that were all taken advantage of by the race planners. On top of preexisting obstacles, RM was able to produce some unique and less common obstacles.  One of my favorites was the “Antigravity.” This consisted of a very bouncy trampoline that was used by racers to jump onto a wall with a cargo net, not one, but two times. I also really enjoyed the “Gauntlet.” This game-show-esque obstacle let racers test their balance on a small beam while trying to dodge large swinging bags.  Another less common obstacle (at least in AZ) was the Frog Hop. Racers had to run across floating “lilly pads on a small body of water without falling in. The planners of this race did the spectators justice by placing the “Slippery Slope” in a visible area near the finish line. Not only did it provide entertainment for the spectators, but it provided encouragement for the racers as well. Upon finishing, we were handed every runners prized possession….a medal. We had orange slices, bananas, power bars and water at the finish. I also really appreciate when races provide a shower area and changing tent, which this one did. 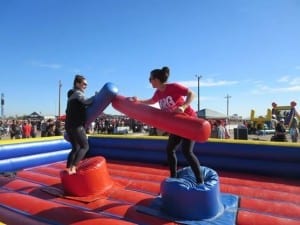 Fellow runner and first-time OCR racer, Roy A Hoffman had the following to say about his first experience: “What a great start to the weekend, competing in my first obstacle race, the Rugged Maniac.  For the last few years I have seen photos on social media of my friends having a great time at many of the popular obstacle races.  I have always wanted to participate in one and finally decided on the Rugged Maniac.  I made the right decision!  The Rugged Maniac is challenging but not exhausting and you finish with a smile on your muddy face and a sense of accomplishment.  The obstacles were spread out well over the three plus mile course and a good variety that tested different parts of your physical abilities.  The after party was a lot of fun too with a good variety of vendors, free stuff, and great music.  I will definitely be competing in another Rugged Maniac event.“

Something can also be said about the volunteers and other runners that helped runners up the Slippery Slope and gave encouragement at other obstacles. Thank you to them. 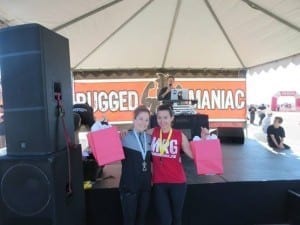 In the festival area, runners and spectators alike had their choice of things to see and do. There were several food vendors as well as a beer stand. There was plenty of seating to eat or just hang out and people watch. Another fun bonus was the free mechanical bull rides and the bouncy jousting, which we HAD to do. There were vendors offering free massage and taping, which I also took advantage of. There were other fitness related vendors such as The Strongman Jerry Pritchett who had several weight lifting challenges and a kickboxing tent that sent someone out in pads for you to “practice” on.  My sister and I walked around, watched other runners and even participated in some of the group dancing.

I had a chance to speak to RM CEO and founder, Brad Scudder, who happened to be out at the AZ race. When I asked Scudder about the differences between RM and other races, he stated that Rugged Maniac offers people a smaller race with more obstacles for prices starting at $39. With that price runners get a t-shirt, a medal, FREE photos and a FREE beer.  There are no other hidden fees such as mandatory insurance, spectator fees, confirmed start times or elite heat fees. Scudder also mentioned the possible expansion of Rugged Maniac into Canada and Mexico.

Overall, Rugged Maniac was a well organized, cost-friendly race that offers the same type of challenge and fun, if not more, than your average 5k OCR. It is also a qualifier race for the OCR World Championships. I would recommend this race to my friends and plan to run it again next year.

Have you done a Rugged Maniac? Rate and Share your experience…