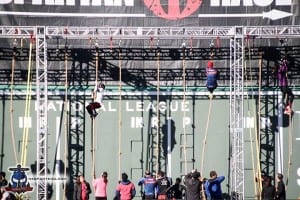 This was my first Spartan stadium event, and I was excited to try something different. I wasn’t as excited about the temperature as it didn't climb much above 30 degrees and with the wind chill factor, it would be much colder in some parts of the stadium. I ended up getting on the road later than planned and drove about 200 miles to Boston and arrived just after 10 AM. I was happy to find a parking lot within walking distance to the stadium that still had spots and only charged $11 for the whole day. I wasn’t sure what to expect, but the turnout was large and the stadium was full of both participants and spectators. I was able to get both my registrations completed fast and that was with one of them not initially showing up in the Spartan systems. I made my way over to the starting point and it took about fifteen minutes to get to the actual starting spot and be given the okay to start running the course. 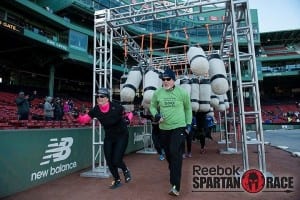 The course started out having to climb up several flights of stairs and then took us in the stadium and had us running in an area that was protecting us from the direct wind. The course at times had participants running in the stadium seating areas and as well around the stadiums outer ring areas. The wind was strong in the outer areas and I made a point to try and pick up my speed to get done with those parts of the course and back in the protection from the wind. The course included several wall climbs of various heights. The typical mud barbed wire crawl obstacle was replaced with a rope version that took place on stadium walking ramps. The texture of the ground on these ramps was rough and I was happy I was wearing knee pads or I would have scraped my knees up pretty good. The technique being used by most on the crawl sections was to spider crawl on all fours and avoid the knees hitting the rough pavement.

The course had your typical Sprint obstacles: monkey bars, Herculean hoist, rope climb, water jug carry, cargo net climb, sandbag carry, spear throw, a new version of the traverse wall, and the atlas stone carry. It also included some obstacles I think are unique to the stadium Sprints, such as a heavy rope jump rope, slam balls, pushups (in the visitors' locker room), box jumps, and a hanging punching bags obstacle. The course was designed to use the stadium in an efficient manner and take advantage of the stairs, ramps, and stadium seating which at times pushed many of the participant’s cardio.  I enjoyed the parts of the course that kept us protected from the direct wind and as well the obstacles built on the actual playing field. It was a surreal feeling to climb the rope climb just next to the Green Monster (The Green Monster is a popular nickname for the thirty-seven foot, two-inch (11.33 m) high left field wall at Fenway Park). I am not a Red Sox fan, but I am a fan of baseball and its history so being on the field was a blast and an experience I enjoyed. The obstacles were well placed throughout the entire course with some of them being on the outside rim of the stadium and others on the field itself. Some of the obstacles were set up to take advantage of the stadium seating areas such as the water jug and sandbag carries. 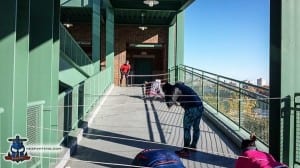 I ran the course twice and found it to be a fun course both times. I have to admit, I did miss the mud and water obstacles, but it was cold so it was better to miss them then end up freezing cold. My only complaint about the course is how they had the sand bag and water jug carries setup, they had a lot of the stadium they could use and should have created several different paths to send the participants as both of these obstacles ended up having delays for both my runs and this could have easily been resolved or minimized by having the runners not all use the same course path. The other obstacle that had delays both times was the cargo net climb, and yet again if they had brought at least one more cargo net they could have resolved or minimized delays here as well. I want to give big props to the Spartan pre-starting area announcer Anthony T. C. Carson, he typically has been the DJ at other Spartan events I ran this year, but at this event he was the one firing us up just prior to being set free to run the course and he did an awesome job. This was a far better starting line experience than I experienced at any of my nine other Spartan races and I hope Spartan continues to utilize him for all future events in this capacity. 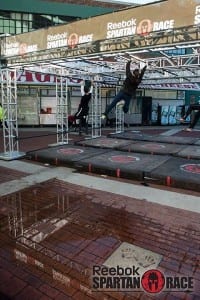 The schwag was the normal Spartan gray finisher shirt and a Sprint medal that is green on one side with a custom logo just for the Fenway Sprint. For us medal lovers, it’s always nice to get a medal that is different than the ones we already have so I like the special medal a lot.

I enjoyed the course and just wish Spartan had done a little better job with obstacles mentioned above to prevent lines and delays. Anthony T. C. Carson did a great job pumping everyone up at the starting line and that was a pleasant surprise for me. I am going to rate the event and course 4.4 stars out of 5. I would like to do more stadium Sprints, but I will not make them a priority and if another OCR is on the same day, I would defiantly go to the other OCR most of the time as I really do enjoy the mud and water.

Have you done a Spartan Race Stadium Race? Share and submit your own review…