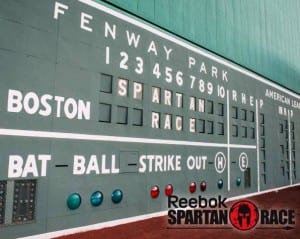 Growing up in New England, nearly every kid dreamed of playing in legendary Fenway Park. The dream quickly faded when I realized that I simply wasn't very good at baseball. However, when Spartan Race brought their stadium series races here a couple years ago, I jumped at the opportunity to finally get down on the same field as my childhood heroes. They returned to the ballpark recently for the third consecutive year and we were excited to once again check it out!

Anyone that's attended a Red Sox game before knows what a hassle parking can be. Thankfully, if you arrived early enough for the race, you could find a parking lot or garage in the $10-$15 range. Public transportation was also another affordable option. Not wanting to deal with traffic, we hopped on the subway and headed towards the stadium. After a quick walk down Lansdowne St., we arrived at the registration tents.  The registration process for a Spartan Race is always consistently quick. The biggest hassle recently has been the number of waivers that are required at these events. Along with the actual race waiver, we also had to fill out Fenway Park and NBC waivers. After handing over the waivers and ID, each runner received their wave time and race packet that included a timing chip, bib number headband and a souvenir race bib. Due to the fact that parts of the race were to take place on the field, safety pins were not to be used. 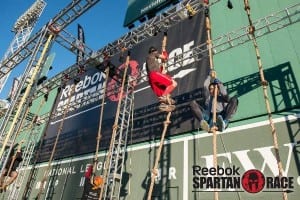 Spartan Race was granted nearly full access to the entire park and the surrounding areas. Nothing seemed off limits except for the actual grass playing surface. Due to the unique venue, there were some obvious modifications to the course that were necessary to make. All of the water and mud obstacles that you would find at your typical Spartan Race were replaced with a few cross-fit inspired ones. The lack of water obstacles was actually a welcome change considering the brisk Fall New England weather. They did a great job in incorporating many of their signature Spartan obstacles. Runner waves were constantly being released every 15 minutes throughout the day. After climbing a 6’ wall to enter the starting corral, each wave was broken up into smaller groups of about 15 people that were sent off every minute or so which helped to alleviate any possible congestion. With the tight confines of the stadium and the sheer volume of people at the event, Spartan Race did an admirable job of minimizing bottlenecks. The only extensive wait occurred at the cargo net when they had to shut down half of it briefly to secure it. Otherwise, it wasn’t more than a few minute wait at any obstacle.

Similar to last year, the course weaved throughout the stadium, all the way from the monster seats to the dugout and everywhere in between. The most exhausting section was the continuous bear crawl under criss-crossed ropes that extended up several of the handicap ramps. Some of the cross-fit inspired obstacles included slam ball, a weighted jump rope with feet bound by a thick rubber band, hand-release push-ups in the visitor’s locker room, atlas lift and box jumps by home plate. Thankfully, the dreaded row machines didn’t return this year. The two carries involved an extended double water jug carry and a sandbag carry through the left field seats. The military hurdles were stationed on the warning track and there were also several walls, ranging from 7’-8’, to contend with. The cargo net was positioned against the centerfield wall, making for an epic climb, and the knotted ropes were located in the shadow of the famed Green Monster. 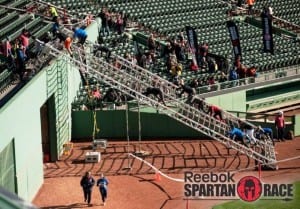 Last year’s stadium style monkey bars were replaced with the more familiar uneven ones. They updated the traverse wall with a new zigzag version with three wall panels that increased the difficulty.  I wasn’t able to maneuver around the final corner and cursed all through my burpee penalty. Just outside the stadium were two classic Spartan obstacles: the Hercules hoist and the spear throw. Unfortunately, the tethered spear throw appears to be here to stay. While I understand logistically why this version works better (volunteer safety, less spears, etc.), I’ve yet to have any luck with them. I made a conscience effort to avoid stepping on the rope or letting it wrap around my leg, however it still managed to get tangled in the metal fencing before reaching the target! (TIP: Pinch the rope tight in your throwing hand and against the spear. More importantly, move all the slack to the other side of the fence so that it doesn’t snag on the fence or your body.)  Replacing the gladiators at the finish line was the heavy bag gauntlet that were actually much lighter than they appeared. As always, the course was well marked and there were plenty of friendly and helpful volunteers. They keep runners and spectators motivated with high energy music pumping throughout the stadium the entire day. 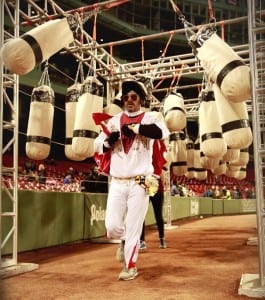 The swag included the familiar Spartan Race “red” helmet logo medal along with the Trifecta pie piece. To commemorate the event, the medal s  were embossed on the back with the stadium and were hanging from a cool, green “Fenway Park” lanyard. Unfortunately, the T-shirt was the same generic style that you receive at every other Spartan Race. As always, one of the best perks at Spartan Race are the free photos offered a few days after the event, however, the quality seems to be getting worse every year.  Another bonus was that all registered spectators were allowed in the event at no charge. They also offered maps to help direct spectators to the best viewing areas. There wasn't really an “after party” for the race but it was cool just to hang out at the stadium and take in the whole scene. The concourse was somewhat congested with various vendor and merchandise tents. All your typical overpriced ballpark food choices were readily accessible. The complimentary beer was not offered in the stadium but was available at a nearly pub.

Based on intermittent GPS data, the race didn’t’ quite reach the typical 5k distance. Many had it somewhere around 2.5 miles. Regardless of the abbreviated distance, it truly is impressive how Spartan Race is able to transform Fenway Park into an actual obstacle course race worthy of the Spartan name. They did a great job of utilizing the entire stadium and surrounding areas without compromising the feel of a true Spartan Race. The Fenway race has quickly become the unofficial end to the OCR season in New England and I hope these stadium events continue for years to come. As a lifelong Red Sox fan, I appreciate any opportunity to visit the nostalgic ballpark.

Have you done a Spartan Stadium Race? Share and rate your experience…