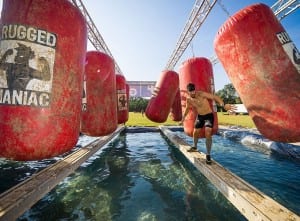 I've run the Rugged Maniac every year for the three years I have lived in South Carolina. The first two years were pretty much the same, only the faces in the crowd changed. But over the last year, Rugged Manic went on NBC's Shark Tank and got billionaire investor Mark Cuban to invest in their brand. As I toed the starting line with a few friends I was excited to see what the infusion of cash and entrepreneurial talent added to the course.

The Rugged Maniac website lists their new obstacles, and in the days leading up to their 2015 season kickoff in Mount Pleasant, South Carolina I was pretty excited to try The Gauntlet, The Ringer, Antigravity and more of the new additions. For this review the focus is on what was new, since the rest of the course was your standard mix of climb over, crawl under, and a healthy dose of mud obstacles.

The first new obstacle we encountered on course was The Gauntlet. Online it looked like a balance beam through a field of gigantic swinging heavy bags like you use in boxing that would knock you silly if it swung into you while on the balance beam. On the course these bags turned out to be filled with nothing more than air and the smallest of runners could easily deflect them without falling off the beam. Pretty disappointing. 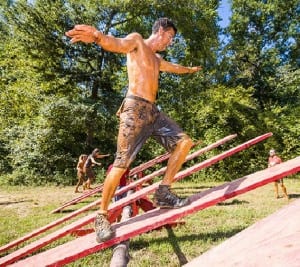 Next up on the list of new obstacles we faced was Tipping Point. This was a large seesaw that you had to run up to the midpoint and get the seesaw to tip and run down the other side. For this obstacle, speed is key. The faster you ran up the front side the easier it was to get to the tipping point. Runners that took it slow struggled due to the incline and the amount of mud on the boards. Tipping point consisted of three sets of seesaws. This was a fun new twist but not terribly challenging. Go up the front side fast and you'll crush Tipping Point.

From there we hit Ninja Escape. If you've ever seen American Ninja Warrior (ANW), this obstacle was almost identical to the quintuple steps that start Stage 1… except very much smaller. This was another easy new obstacle that looked great online but disappointed on course.

On to Pack Mule. Pack Mule had you choose a 25 or 50 pound Wreck Back and carry it for a distance. The problem was that the distance was very short, 75 yards approximately. If you've ever done a Spartan or a BattleFrog, Pack Mule will disappoint you. Very easy if you've got any strength at all.

AntiGravity was a nice surprise. It was two elevated trampolines that you used to vault yourself onto two padded cargo nets. It was one of the more fun new obstacles even though the challenge level was pretty low. As we walked back on course as spectators we saw a lot of runners doing back flips on the trampolines and just having fun with it. 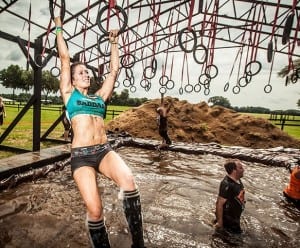 The Ringer was the most challenging of the new obstacles. It was a series of gymnastics rings suspended over water that you had to swing from one to the other. In and of itself, not that challenging. However, the obstacle had some sway in it from the other runners to the sides of you so not only were the rings spaced apart fairly far, they were swinging left and right, forward and back. Back on course as spectators we kept count for a while and about 90% of runners failed this obstacle and many just walked around it. Nice job Rugged Maniac!

Warped Wall was the last new obstacle we saw on course. Again, think of ANW's famed warped wall except on a much smaller scale – plus there were dedicated volunteers at the top to grab you once you got close. It was fun, but not overly challenging to anyone in halfway decent shape.

Overall I am a fan of Rugged Maniac, even though it's more of a mud run than an obstacle course race. Their festival area is always fun and this year they had a “Oktoberfest like” beer stein holding contest thrown into the mix. This was harder than Ninja Escape and The Gauntlet combined. Holding a heavy stein out at arm's length for several minutes is difficult and as soon as your arm shook enough to spill a drop of beer, they pulled you out of the competition. I'll use my 3rd place bottle opener proudly for years to come.

Swag Score was a 3 out of 5. They added a finisher's medal this year which was nice. However, I laid out my three shirts from the previous years and it was evident they skimped on shirt quality to provide the medals. The shirt was much thinner than in previous years.

In the end the rebranding was a solid effort. The waves are never too crowded at this location and parking is always free and ample. Rugged Maniac will never be a hardcore type OCR, but for what it's worth, it beats its comparable peers hands down.

Overall Course Score 3.5 out of 5. Rugged Maniac changed it up with new obstacles, some were good, others were not.

Have you done a Rugged Maniac? Share and Rate Your Own Experience..