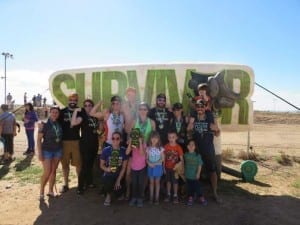 After an unimpressive experience at this event in 2014 I left me promising myself that I wouldn’t be signing up for another one of their events. I was thoroughly convinced that wild horses couldn’t get me to sign up for this year’s Survivor Mud Run, and that’s when it happened. I was bit by the OCR bug.

Having completed one event in the early part of 2015 the adrenaline was already coursing through my veins and I wanted to get back out on a course as soon as possible.  Tough Mudder was the next scheduled event for me and Survivor fell a week before it. The wheels started turning in my head. I could use Survivor as a tune up for the upcoming longer event. Besides, several of my Terrain teammates would be there and I always enjoy the time I spend with them. On the eve of the deadline to register I signed up.

I went into the event having low expectations. When I arrived, parking and check-in were simple enough and without hassle. Racers were given a bib and a neon green headband with the words ‘Survivor Mud Run’ on it. It reminded me of a poorly knit sweater that you receive as a gift from that one relative we all have that dabbles in arts and crafts and then sends out their creations in lieu of a real present.

I tucked the headband towards the bottom of my backpack and set off for the the start line checking out the few booths that were set up along the way. There was a tent set up with Survivor merchandise. If a participant wanted a shirt to remember this day they would have to purchase one as it was not included in the registration. Before long familiar faces started showing up and we prepared ourselves for the competitor’s wave.

The course was almost identical to what it had been the prior year. Once again, Survivor had skimped on the obstacles and relied on the natural layout of the course. If you like running up and down small hills that dirt bikes ride on then this course is for you. If you are looking for solid obstacles to conquer then keep looking, you won’t find them here. The lack of obstacles made this a true runner’s course. 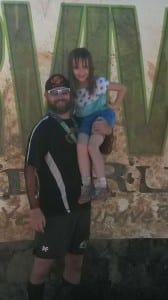 As I approached the finish line the thought of the tiny medal I was handed last year made me chuckle and I prepared myself for a similar offering. To my surprise the medal, once again handed to racers still in the packaging, was a definite improvement. It was larger and displayed the name and year of the event, a definite step up from before. The race offered an area to rinse off which was well set up and easily accessible. The changing tents provided only moderate privacy as there were large gaps where the tent and the poles supporting it came together.

Despite all my criticisms, I had a great time at Survivor Mud Run.

Overall this was a mediocre event at best. It doesn’t have great obstacles, they don’t give t-shirts to racers, and on its own there is nothing that makes it a memorable race. But there is something I have learned after doing OCR’s for 5 years. It isn’t always about the race itself. It’s about the people you are with, the friendships that are made, and the bonds that are created. On that day I was fortunate enough to be surrounded by amazing people. The kind of people who made me smile, who inspired me, and people who made what was a rather plain and dull course an experience to remember. That is what the OCR community is all about.

Have you done a Survivor Mud Run? Share and rate your own experience…

About the Author: Doug Hopple

I am an average guy with an anything but average passion for all things OCR. My first event was in 2011 and I have been hooked ever since. I really enjoy introducing people to the sport and watching them conquer things they never thought possible.