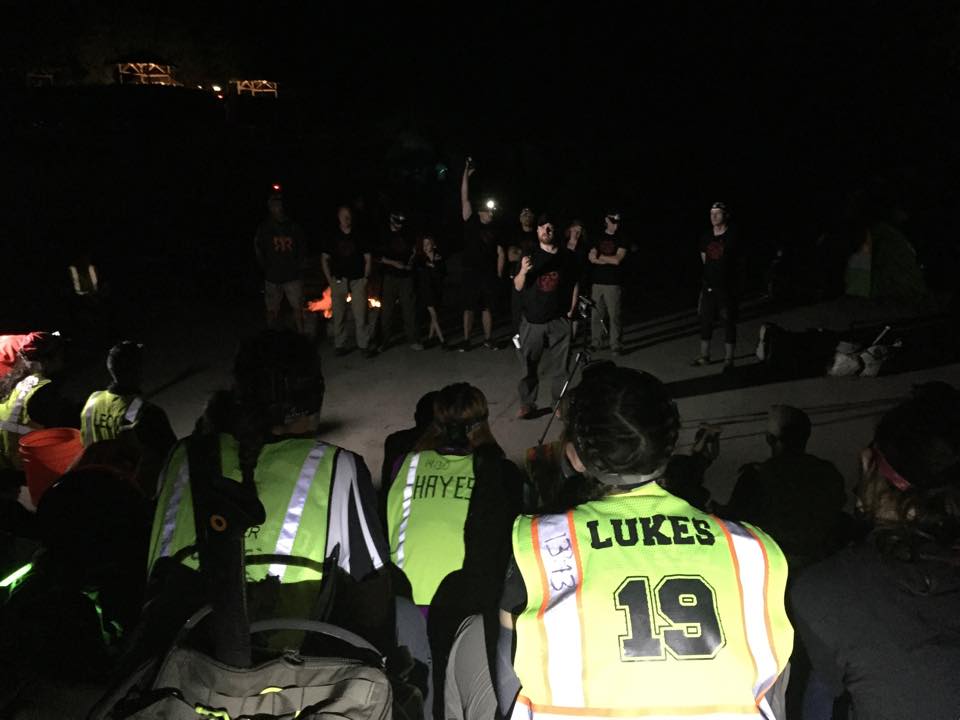 What do cinder blocks, air soft rifles, a Robert Frost poem, a disgusting, smelly pond, donuts on a string, a waterfall, wood chopping, a brutal & unconventional core workout, community service, and Dave & Busters have in common? All played vital roles in the 2015 SISU Iron: a world-class 30h endurance challenge in the hills of Monrovia, CA.

Together, my wife Anne and I took on the challenge of the SISU Iron. It had been looming on the schedule for months, and much of our training was geared towards it. We both knew it would be incredibly tough, and would push us to and past our limits. We did not know if we could finish, and had decided some time ago to each run our own race to the best of our abilities and see what happened.

Friday night consisted of some tough challenges, but we mostly coasted through them. While some dropped for hypothermia-related issues from their time spent in Frog Pond fairly early, we had the advantage of slightly more than 3% body fat, and this helped us warm up again once we were out of the water. Anne endured a brutal PT class with Coachpain DeWayne that included buckets full of water held overhead, in squats and in plank, and trips back into the pond while I ate tasty treats of grasshoppers, larvae, and serrano peppers, then had to maneuver a cinder block around a mile long loop without touching it with my hands… while one hand was zip-tied to the opposite foot.   A couple of other relatively easy challenges rounded out the night. 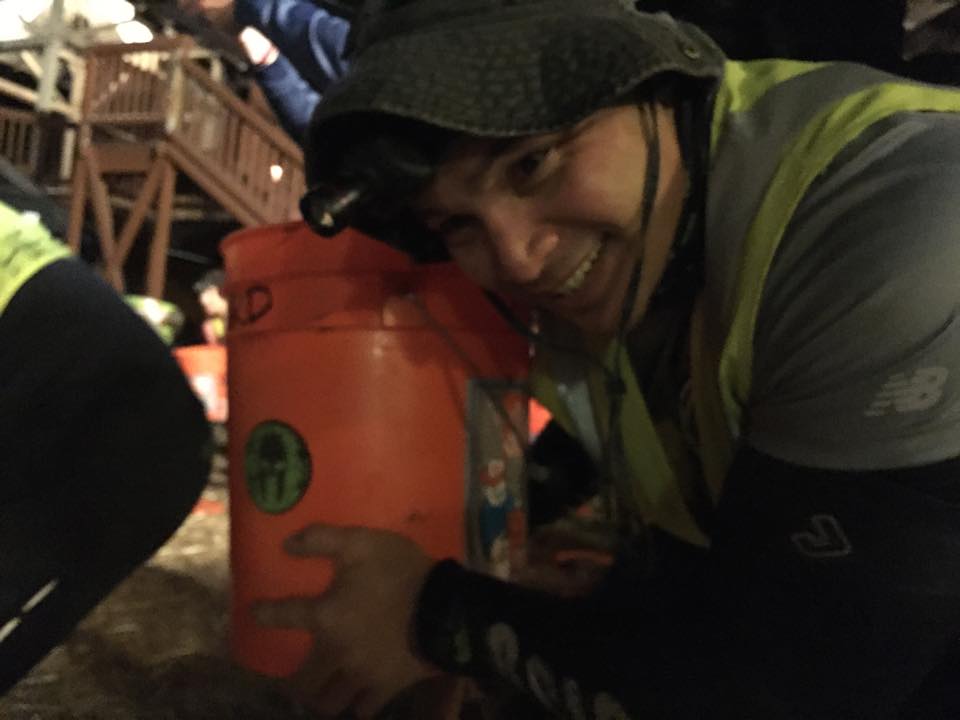 In the morning, we had our first time hack; a 3 mile hike up the mountain and back, with the last five people arriving back at the fort being cut. At the top of the mountain pass, we received a poem to memorize which will likely resonate with all the participants for a long time to come: Robert Frost's “Stopping by Woods on a Snowy Evening”, which ends with the haunting verse

The woods are lovely, dark, and deep

But I have promises to keep

And miles to go before I sleep

And miles to go before I sleep.

We spent some time doing community service projects for the camp that included clearing brush and cutting down some unwanted trees, then the biggest challenge of the event was explained – Victoria's Challenge. This was a 7+ mile run into town with a stop at Dave & Busters to collect 350 tickets, then a run/hike back up the very long, steep hill to camp. The cutoff was 4h or the first 50 racers, whichever came first. 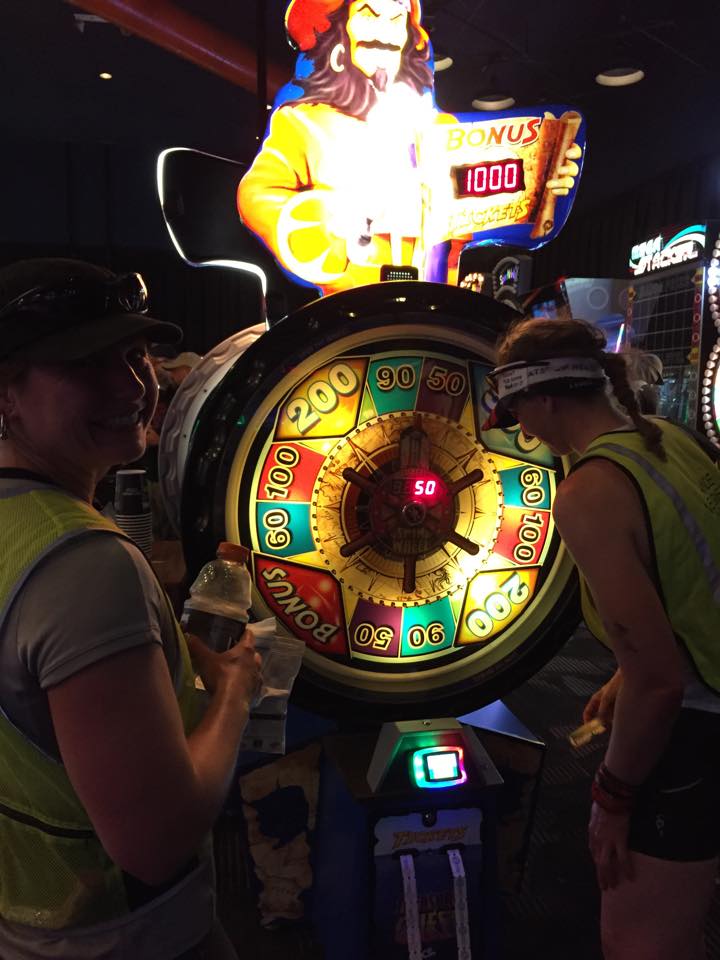 Anne & I started down the hill together, and it quickly became apparent that although she's an excellent runner with more long-distance experience than I have, on this day, in these conditions, and with what we'd already done, my legs were fresher than hers. I was pushing the pace and trying to keep us running more often than walking. On the way there, Anne was getting frustrated and emotional, and tried a couple of times to make me go ahead and run my own race, like we'd originally planned. And I, in turn, found what really mattered. It wasn't the race. I changed the plan, quite probably pissing her off a bit, and decided that we'd sink or swim together. She couldn't make me leave her behind.

We finally made it to D&B's, and thanks to some careful planning had a quick turnaround and were back out on the road. 2h had elapsed of the four we'd been allotted, and our legs were feeling pretty thrashed. Nevertheless we lurched into a trot along the flats, and then into a steady fast hike when the road turned uphill. We passed several competitors, and had a few others catch up to us and hike the big hill with us. As the road turned into switchbacks, a couple of the girls pulled ahead, and our friend Amber started to fall behind. After what seemed an eternity, we finally saw the Camp Trask sign, and found staff members waiting for us, encouraging us to run in before the time ran out. We sprinted down the small hill to the finish line with 2 minutes to spare. Moments later, Amber Lukes, the Race Director's fiancée who had dropped back on the hike, ran in with another staff member to finish with 0:00 left on the clock. Of the ~75 racers who had started Victoria's Challenge, only 31 had finished it. It was heartbreaking watching amazing athletes get cut for being only a couple of minutes behind the time hack. Janice Ferguson was one of those who missed the time hack, but she refused to give up her bib. She made the staff take it from her instead, and her words of “Make them take it!” will stay with all the competitors as they go on with their lives and future challenges.

We had a brief respite after this consisting of a few skills challenges (archery, airsoft rifle, fire starting), followed by a wood-chopping challenge where we had to make kindling of a particular length and diameter, and stack it 6′ high. Thanks to a fantastic starter log that made enough kindling for the first 3′ of our Jenga tower, we completed this challenge first. 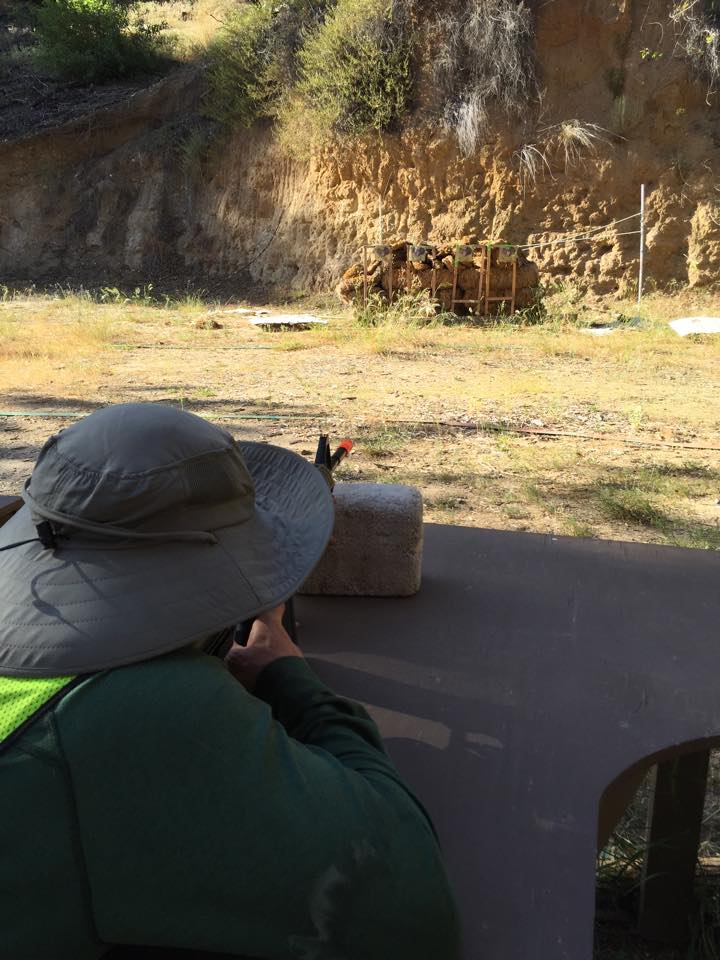 Then it was time to swap things up. Anne went off to do the Survivor Challenge of the bugs and zip-ties (with a nasty variation that they were double zip-tied to a partner while bringing their cinder block around the loop), while I went in with Coachpain.

This was to be my darkest moment of the event, as he put us through the wringer with 2h of legs and core exercises, the likes of which most of us had never seen before, let alone attempted 25h into a 30h event. 4 of the remaining 15 athletes in this class, who had beaten the time hacks and endured a huge amount to get to this point, dropped voluntarily before the end of this class. During the unending lunge, where we had to hold a lunge position while holding our axe overhead and with a piece of wood resting on our lunging calf, I came the closest to breaking that I've ever been. Each time the wood dropped to the ground, Coachpain was there, yelling, asking if you were done, adding more time to the clock if you told him “no” and had the wood replaced. My body was breaking, the muscles in my legs were dying and jumping all over the place. That damned wood dropped off my calf at least 5 times. The 4th time it fell, Coachpain was yelling questions at me for at least a full minute before I was able to answer that no, I wasn't giving up and was still in it. Maybe it was longer, I'm not really sure.

Three things kept me in the fight. The first (and most important) was knowing that if I dropped, Anne would be on her own to finish. The second was my friends among the volunteers and already eliminated competitors, calling my name, encouraging me, and making eye contact when they could. I don't think they know how much that helped in the moment, but I will love them forever for it. The third, stupidly, was a Fireball sign someone had put up on a table in front of me, and that I used as a focal point for the last few agonizing minutes. Finally the session was over, and I was left shaking with exhaustion and adrenaline, cold, and severely rattled by what had just happened.

Anne appeared and I relayed what had happened, and how fragile everything was right then. She left and brought back a jacket to warm up my core, and I was able to scarf down some much-needed calories and was feeling a little better within a few minutes. Which was lucky, since that's how much time we had before starting the next and final challenge: the Night Hike. 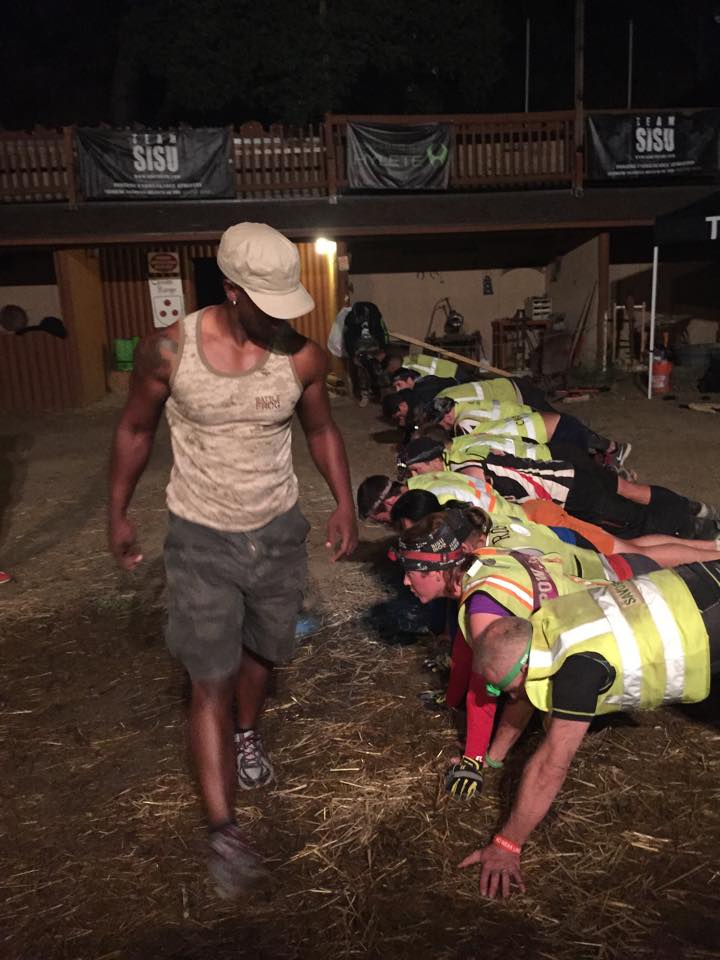 This hike took us back down the mountain, and up a flowing stream on the other side. Anne slipped a few times on the wet rocks, and had some major issues climbing the steep concrete overflows, meaning we were quickly at the back of the pack, with only staff member Rob Barger sweeping behind us to make sure no-one got lost. The hike eventually terminated in a small waterfall, where we filled our buckets past a marked depth, and prepared for the long trek back to the fort.

While we had enough knowledge to bring tight lids for our buckets, other racers came much better prepared with specialty packs or molle straps to help make the buckets easier to carry. Again, Anne suggested that I go ahead, and that she'd be fine, but she relented when I pointed out that she lacked the ability, at that time, to put her bucket down and pick it back up into a reasonable carrying position without help. We were in this together, as it was meant to be. Anne and I had to carry the buckets the old fashioned way, and it became apparent as her back began to seize that it was going to be a long night. 100 yards at a time, we made our way down the steep path, then painfully slowly up the massive hill on the other side. The other racers were far out of sight now, and we were effectively alone in the night (Mr Barger was still a silent presence behind us).

We knew that we had no hope of making the cited time hack, but we had a glimmer of hope as long as we weren't swept from the course and told it was over. We decided that it didn't matter if the sun had risen and the award ceremony was over before we arrived, we would finish this challenge. And eventually we did, nearly an hour past the time hack, to be informed that the hack wasn't important and that we had finished. Together.

This was easily the hardest event either of us had done, and the journey was an emotional roller coaster to say the least. The fact that we were able to support each other and make it to the finish together makes it incredibly special for both of us.

Many may ask (and several have) why we take on these type of challenges, and put our bodies through this sort of torture. Part of it is the desire to push ourselves to see what we're capable of. Part of it is the camaraderie of finding people on the same mission as you. And a big part of it was explained to my friend Matt Wiltshire by one of the race directors – to paraphrase: There are people who find their place in the world; who are content to do the same thing day in and day out, and who find happiness in an ordinary life. Clearly, we are not that kind of people. 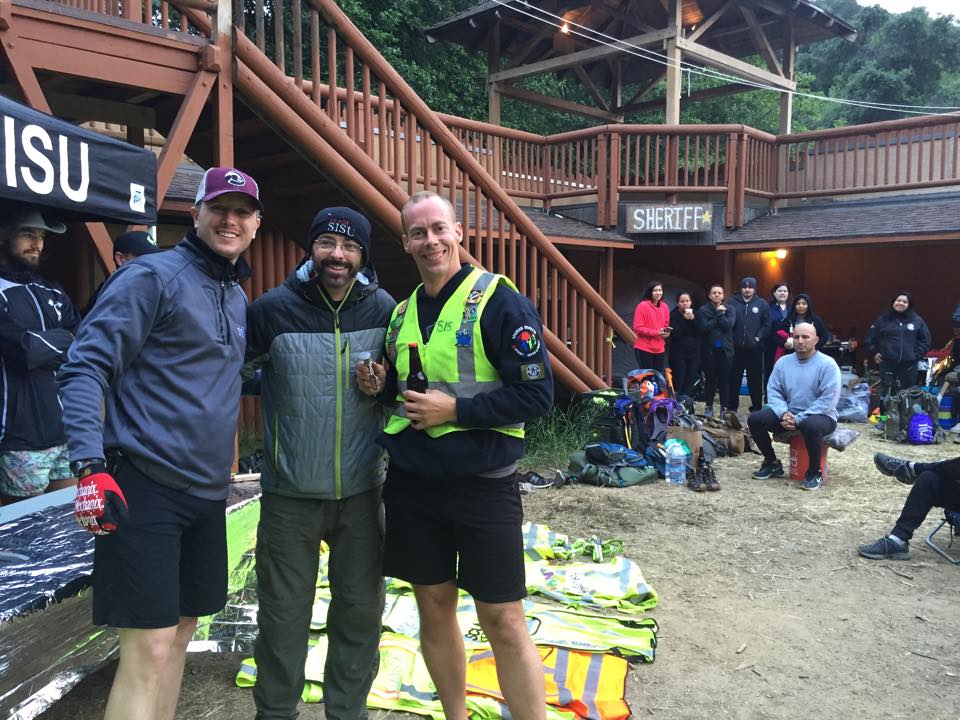 Editor Note: We asked Chris “Nomad” Cow to rate this event 1-5. He simply responded “life changing” and can I make it higher than 5?