Race Recap: BoldrDash on the Beach 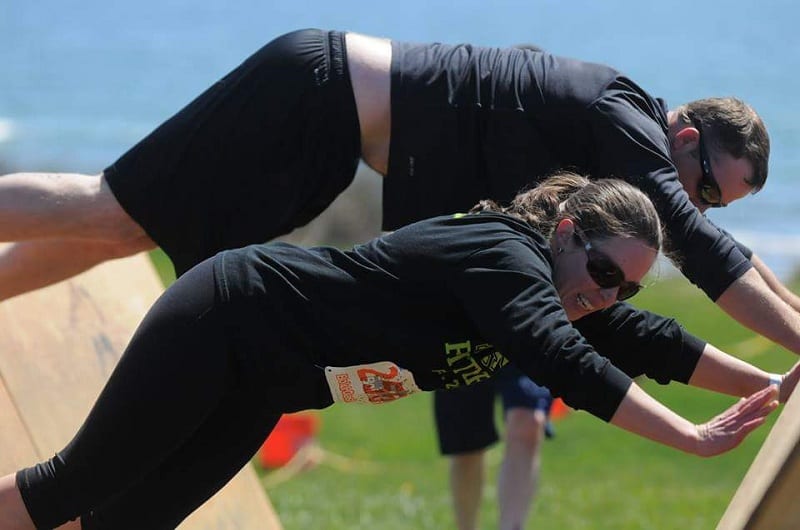 This was one of the OCR’s I was not going to miss; Lynn Hall and her amazing team create both an amazing course and event every time they step up to the plate and I had very high expectations for this beach event. The morning started out on the cold side and I was worried early on it may not warm up all day. It was funny to see so many racers at registration wearing long pants and a jacket when they would be racing shortly. Mother Nature was awesome and the day ended up being perfect weather.

The first thing I noticed different from last year’s BoldrDash race was the new pre-race motivator Maryann Shakespeare Donnelly, she was awesome from the very first wave to the last. At the start of all four of my laps I could hear her doing a amazing job. 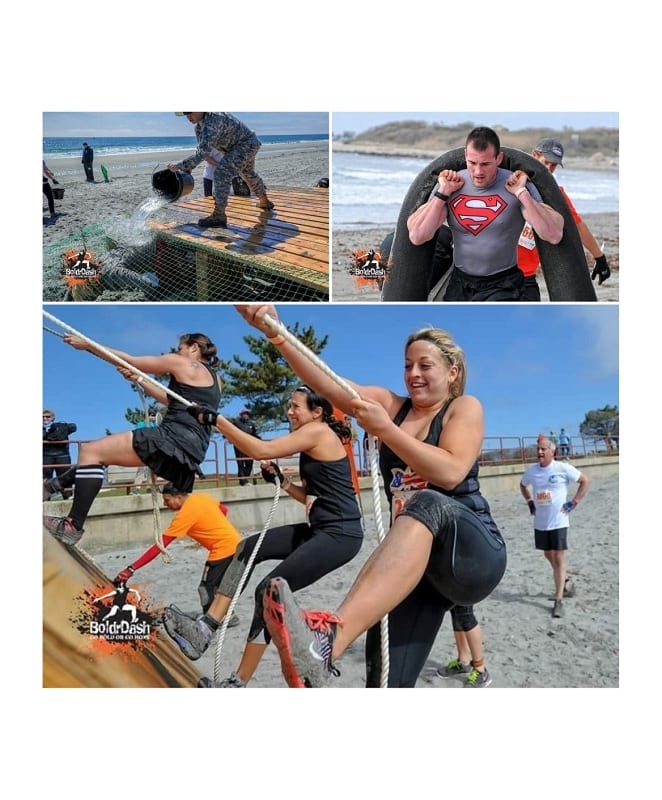 The course started out with a brief sprint, and then we picked up a rock (sizes of rocks varied from small to very large) and had to carry the rock on the course and climb over three four foot walls. After this came another very short sprint and then the “Boldr Chain Carry” which was dragging a heavy and long chain with a large rock attached to one end up a very small incline and then back down. Then came one of my favorite obstacles of all, the “Spider Crawl” which you place your hands on one slanted wall and feet on the other and then spider across the walls. Almost immediately up next was “Balance Beam Chains” which I found was much easier with a partner and I each doing one beam and both of us holding hands as we carefully crossed the beams in unison.

Next up was “Cargo Tube Crawl” which had us first scale a wall (had holdings for assistance) and then crawl through a rope cargo tube that was well above the ground, once through the cargo tube, it was time to be a fireman and/or Batman and slide down a pole! The course now made its way to the beach and onto the sand, and after brief sprint, came “Wreck Bag” carry, this was a larger Wreck Bag and weighed 100 pounds, on my first lap, I did this obstacle with someone else and on laps two and three I did it alone. On my final lap, I did it as a two person team. After a short sprint came a set of two “Tire Hurdles” which is an obstacle with three tires created almost like a spool of thread which you have to jump/get over the tires. The tires turn, so it’s not as easy as it looks. The next obstacle on the beach was “Under Bucket Carry Crawl” which had you crawl under part of an obstacle we would get back to later on the course. On several of the laps this obstacle had US Army Soldiers dumping buckets of ice cold ocean water on racers as they crawled under them, I personally loved the cold water and asked for more on all four laps! 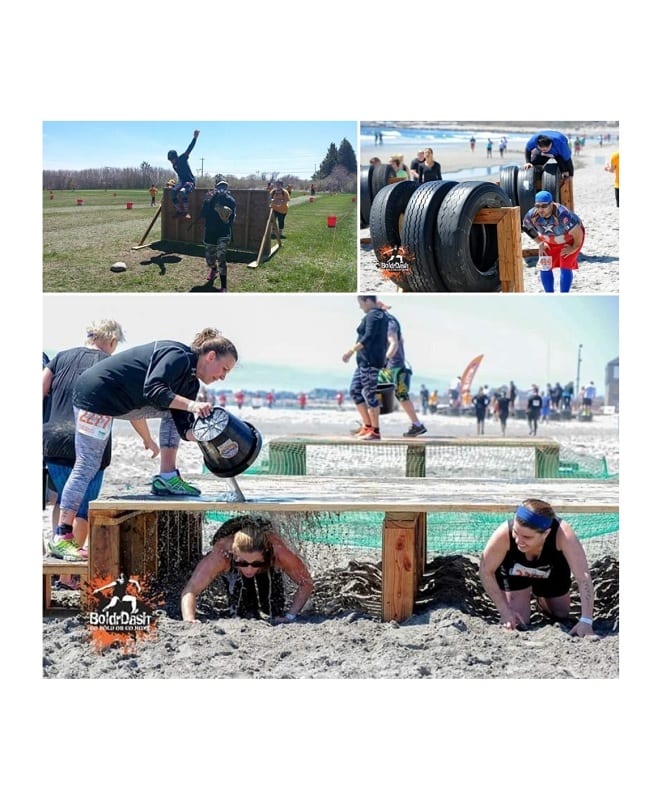 At this point, the course had one of its longer runs on the beach and we eventually reached the next obstacle “Scale the Boulders”, this obstacle took racers on to the rocky part of the beach which had both large boulders and small rocks and racers had to make their way across this section of the beach for what seemed to go on forever. BoldrDash made sure to have a sign that warned of loose rocks. This obstacle was very stressing for me, as I leave for England in only a few days to run Rat Race and all I kept telling myself was don’t break an ankle! After surviving the boulders, the course took us through two abandoned stone structures and then came a nice and easy tires obstacle to happy feet through. I then made my way back on the beach/sand and came to a 6 foot wall climb, followed by a 8 foot wall climb. Up next came “Balance Beam Sloshpipe” which was a balance beam crossing, while holding a larger PVC pipe partially filled with a liquid that made balancing much more challenging! If I recall, at this point came a sandbag carry, which was a short distance, so I carried two sand bags on all four laps.

Up next was “Tire Platforms” which was a series of tires with plywood platforms and required you to jump/hop from tire to tire. I have to admit, I loved this obstacle! The course now took a brief turn onto the boardwalk and we came to a “Tire Drag” which had racers pull a larger truck tire to them via a rope and then either carry or roll the tire back. I then made my way back on the beach/sand and came to “Tire Tube” which was a crawl through a tire and then crawled under a short net and into a PVC tube. Up next was one of the hardest and cardio killing/bonking obstacles (at least for me) on the course, the “Over Under Through” obstacle which had racers carry a buoy (filled with water) and had us go over, under and through several series of walls. This obstacle bonked me on all four laps! Up next came “A Frame” which was a slanted wall climb with a rope, like most of the BoldrDash obstacles this obstacle had three versions and I am happy I was able to do the hardest version on all four laps. Up next came “Monkey Bars” which also had three versions ranging from hard, medium, to not so hard. The hardest version had an incline at the beginning bars; the medium was straight across but the bars were further apart than the easiest version. 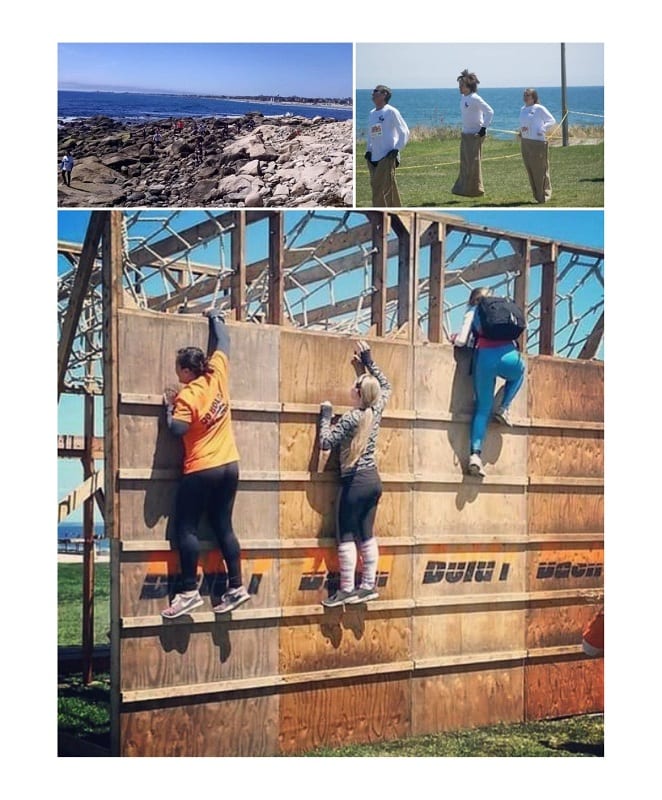 After a short sprint we left the beach/sand and came to “Parallel Bars” which also offered three versions and was very challenging all day. A very short distance after was “Tire Wall” which was a climb up tires that also offered three versions. The next obstacle was a BoldrDash signature obstacle “Potato Sack” which I for the life of me couldn’t get my studded sneakers in all day (lol)! Now came the final obstacle of the course “Tire Swing” which is multiple tires hanging from ropes that you have to Tarzan across without touching the ground. This was followed by a very short sprint to the finish line!

This was my first OCR on a beach and I being an ocean and beach lover, I enjoyed the course and beach all day. The obstacles were awesome and the energy from racers, spectators, staff, and volunteers was amazing all day and made for a better event and race.

The schwag was a nice shirt (different color than last years) and a very nice finisher medal unique to this beach event.

The course rocked, the staff/volunteers rocked, the weather turned out to be perfect, and the event was good times all day. I am rating this event/race 5 out of 5 stars.

I came expecting a great course, with well-built obstacles, and the best volunteer staff I would see all year and that is exactly what BoldrDash delivered. It’s a shame that some OCR racers local to the New England area seem to skip BoldrDash because it’s “just a 5K”. BoldrDash puts on one of the best events from start to finish in the entire OCR industry and I hope the word spreads and more come to their next event.

Have you done a BoldrDash? Share and Rate Your Experience…